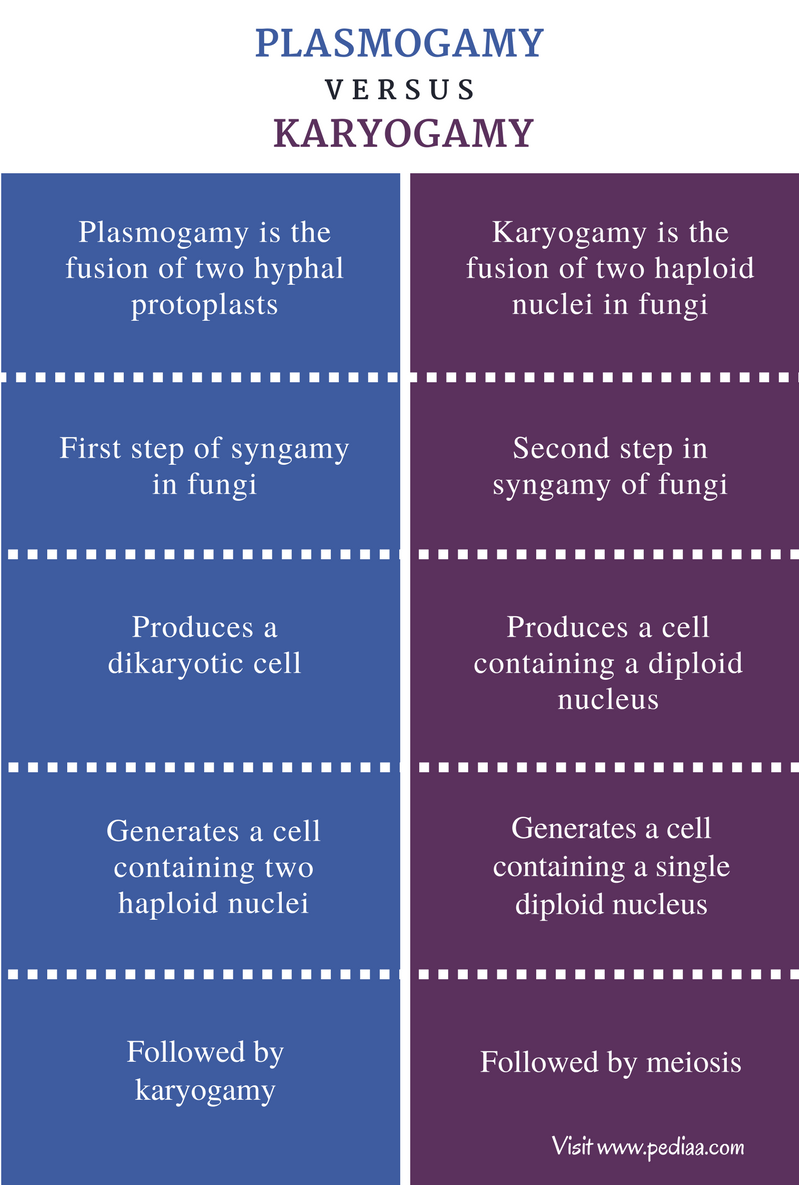 During the syngamy of fungi, the union of the two cytoplasms of haploid gametes is known as plasmogamy. The fusion of the two nuclei of the fused cells occurs later. But, by plasmogamy, the fusion of two haploid nuclei is facilitated by bringing them close together in the same cell. Plasmogamy is followed by a dikaryotic stage, which sometimes persists through several generations before undergoing karyogamy. Heterothallism is the fusion of thalli, belonging to different mating types. Heterothallism is exhibited by Basidiomycota.  In Basidiomycotina, the union of the two hyphal protoplasts of haploid parent cells occurs from the mycelia. A single cell consists of two haploid nuclei (dikaryon) for several generations. The growth and cell division occur in these cells while performing the dikaryon. Plasmogamy in Basidiomycota is shown in figure 1. 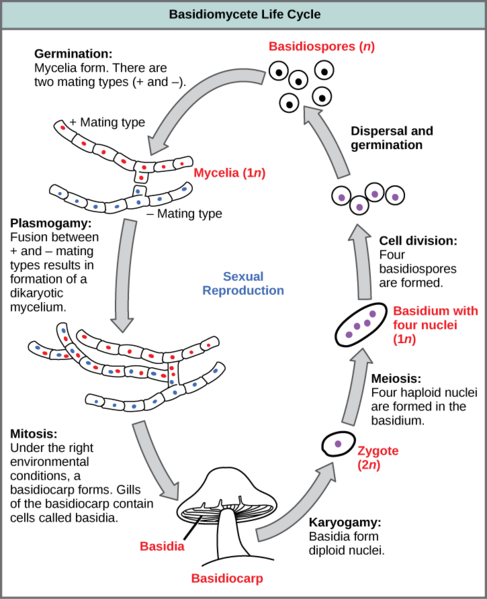 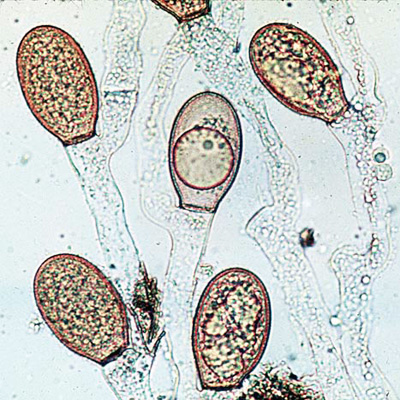 During the syngamy of fungi, the union of two haploid nuclei of a dikaryotic cell is known as karyogamy. Karyogamy is the second or the final step in the process of syngamy. During karyogamy, nuclear envelopes of the two haploid nuclei are fused in three steps. First, the outer membranes of the two nuclei are fused. Then, the two inner membranes are fused and finally, the fusion of spindle pole bodies occurs. After undergoing the karyogamy, the dikaryotic cell becomes diploid. The resultant diploid cells are known as  zygotes or zygospores. The zygote is the only diploid phase found in fungal life cycle. Karyogmy is followed by the meiosis of diploid nuclei. During meiosis, duplication of chromosomes occurs along with the recombination of genetic material and the division of the cell ultimately produces four daughter haploid cells. That means, karyogamy contributes to the genetic variations among fungal population. Producing daughter cells then undergo mitosis in order to increase the cell number. These daughter cells are called as spores. Ultimately, as a result of sexual reproduction of fungi, haploid spores are produced.

In higher fungi like Ascomycetes and Basidiomycetes, karyogamy is delayed and dikaryokitc cells are maintained for several generations. The dikaryon is capable of dividing mitotically along with usual cytokinesis. This phase of the fungal life cycle is called dikaryotic phase. The development of the mycelium along with the two dikaryotic nuclei is followed by the simultaneous cell division, separating sister nuclei into two daughter cells. But in lower fungi like Phycomycetes, karyogamy occurs immediately after the plasmogamy. The production of ascospores in ascogonium by undergoing karyogamy is shown in figure 3. 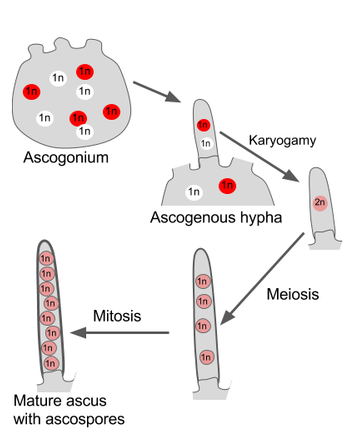 Karyogamy: Karyogamy is the fusion of two haploid nuclei in fungi.

Plasmogamy: Plasmogamy is the first step of syngamy in fungi.

Karyogamy: Karyogamy is the second step in syngamy of fungi.

Plasmogamy and karyogamy occur during syngamy in fungi. Syngamy is a type of recombination, considered as the sexual reproduction of fungi. Plasmogamy is followed by karyogamy. During plasmogamy, two protoplast of either gametes or different mating types of thalli are fused. Plasmogamy forms a cell, containing two haploid nuclei, which can also be called as a dikaryon. In higher fungi like Basidiomycota, this dikaryotic stage is maintained for several generations. But in lower fungi, plasmogamy is immediately followed by karyogamy. During karyogamy, the fusion of two haploid nuclei in the dikaryotic cell is observed. In Basidiomycetes, plasmogamy occurs between two mating types of thalli. Developing dikaryotic thallus form the basidiocarp, which is a characteristically large fruiting body. But in lower fungi like Oomycota, two gametes are fused during syngamy. Karyogamy of the two haploid nuclei produces a diploid nucleus which can undergo meiosis to produce spores. Spores germinate to produce haploid mycelium. The main difference between plasmogamy and karyogamy is their structures, which are susceptible to fusion.