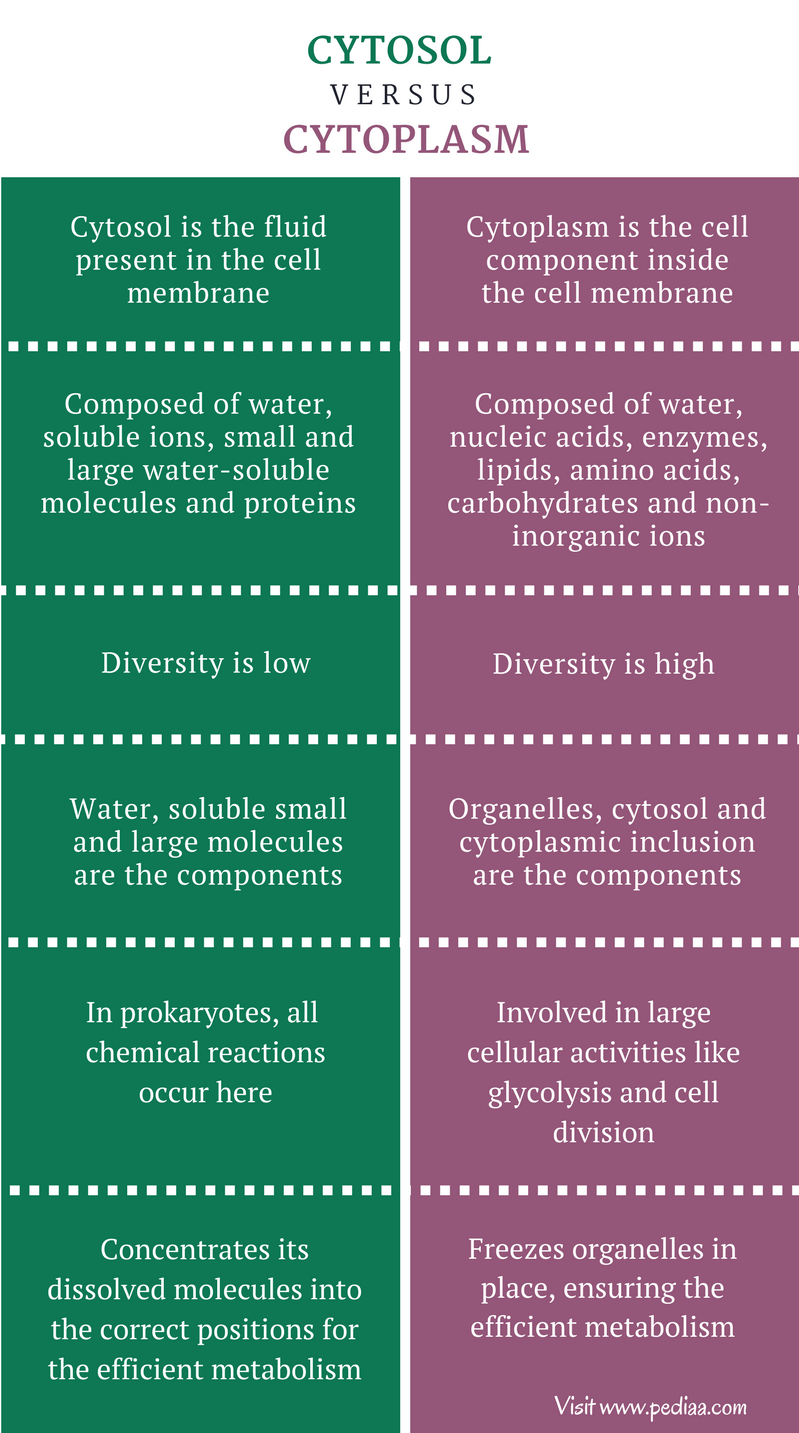 What is the Cytosol

Composition and Properties of Cytosol

The cytosol is mainly composed of water, small and large soluble molecules and dissolved ions. It dissolves non-protein molecules which are less than 300 Da in size. In the plant cell cytoplasm, around 200,000 different small molecules can be dissolved in the cytoplasm. Water makes up of about 70% of the cytosol’s total volume. Thus, the pH of the cytoplasm pH ranges from 7.0-7.4. The viscosity is also similar to water. But, the diffusion through the cytosol can be fourfold slow for the small molecules. Water constantly enters the cytosol by osmosis. The concentration of the calcium ions in the cytosol is as low as <0.0002 mM, allowing the calcium ions to perform as a second messenger in signaling pathways.

The cytosol contains a comparatively large amount of charged macromolecules like proteins and nucleic acids. The amount of proteins dissolved in the cytosol is around 200 mg/mL. A complex cytoskeleton filaments mixture, which is composed of microtubules and actin filaments can be found in the cytosol. These filaments form a network of cytoskeleton. The filament network and higher concentration of macromolecules contribute to macromolecular crowding effect inside the cytosol. Due to this effect, cytosol alters its properties from an ideal solution. The crowded solution of cytosol by different types of molecules is shown in figure 1. 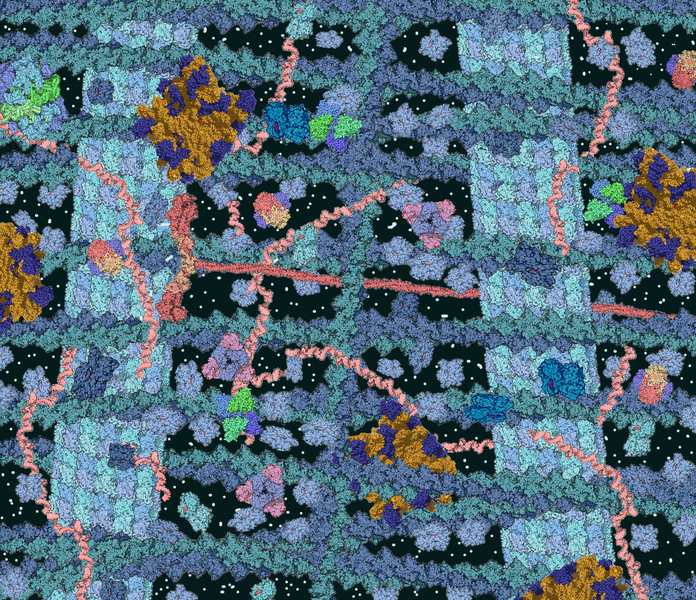 The cytosol consists of a concentration gradient of some molecules, though most of the small molecules are equally distributed. For example, calcium ion gradient is created by the opening of the calcium channels which only lasts for milliseconds. Several calcium gradients spark to form a large calcium gradient, known as calcium waves. Moreover, protein complexes form in the cytosol, allowing the substrate channeling where one product is directly passed to its next step. Some of these complexes also consist of a large, isolated, central cavity like proteosome. These protein compartments contain proteases degrading cytosolic proteins. Another example of a protein compartment is microcompartments in bacteria, which are 100 to 200 nm in diameter. Carboxysome is a type of microcompartment which is involved in carbon fixation. The cytoskeleton sieving concentrates ribosome like organelles in a particular area with the aid of excluding compartments. These excluding compartments are made up of denser actin fibres.

What is the Cytoplasm 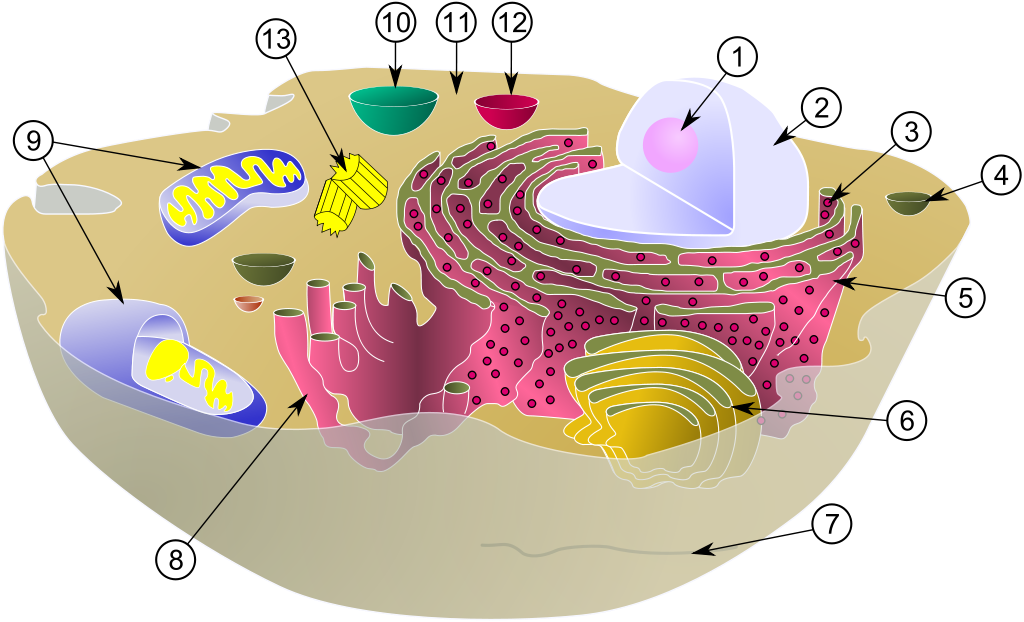 Composition and Properties of Cytoplasm

Difference Between Cytosol and Cytoplasm

Cytosol: Cytosol is the fluid present in the cell membrane.

Cytoplasm: Cytoplasm is the cell component inside the cell membrane.

Cytosol: The cytosol is composed of water, soluble ions, small and large water-soluble molecules and proteins.

Cytosol: The diversity of the cytosol is low.

Cytoplasm: The diversity of the components is high compared to the cytosol.

Cytosol: The components of the cytosol are water, soluble small and large molecules.

Cytoplasm: The components of the cytoplasm are organelles, cytosol and cytoplasmic inclusions.

Cytosol: All the chemical reactions occur in the cytosol in prokaryotes.

Cytoplasm: The cytoplasm is involved in large cellular activities like glycolysis and cell division.

Cytosol: The cytosol concentrates its dissolved molecules into the correct positions for the efficient metabolism.

Cytosol: Signal transduction and transportation of molecules take place in the cytosol.