Chloroplasts are a type of plastids found in algal and plant cells. They contain chlorophyll pigments in order to carry out photosynthesis. Chloroplast consists of their own DNA. The major function of chloroplast is the production of organic molecules, glucose from CO2 and H2O with the aid of sunlight.

Chloroplasts are identified as lens-shaped, green colour pigments in plants. They are 3-10 µm in diameter and their thickness is around 1-3 µm. Plant cells process 10-100 chloroplast per cell. Different shapes of the chloroplast can be found in algae. The algal cell contains a single chloroplast which can be a net, cup, or ribbon-like spiral in shape. 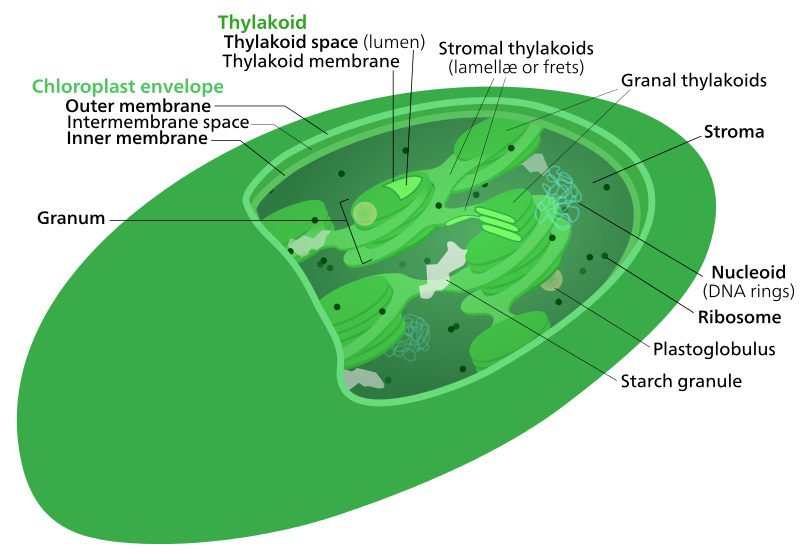 Thylakoid system is composed of thylakoids, which is a collection of highly dynamic, membranous sacks. Thylakoids consist of chlorophyll a, a blue-green pigment which is responsible for the light reaction in the photosynthesis. In addition to chlorophylls, two types of photosynthetic pigments can be present in plants: yellow-orange colour carotenoids and red colour phycobilins. Grana are the stacks formed by the arrangement of thylakoids together. Different grana are interconnected by the stromal thylakoids. Chloroplasts of C4 plants and some algae consist of freely-floating chloroplasts.

Chloroplasts can be found in leaves, cacti and stems of plants. A plant cell consisting of chlorophyll is referred to as chlorenchyma. Chloroplasts can change their orientation depending on the availability of sunlight. Chloroplasts are capable of producing glucose, by using CO2 and H2O with the aid of light energy in a process called photosynthesis. Photosynthesis proceeds through two steps: light reaction and the dark reaction.

The light reaction occurs in the thylakoid membrane. During the light reaction, oxygen is produced by splitting of water. The light energy is also stored in NADPH and ATP by NADP+ reduction and photophosphorylation, respectively. Thus, the two energy carriers for the dark reaction are ATP and NADPH. A detailed diagram of the light reaction is shown in figure 2. 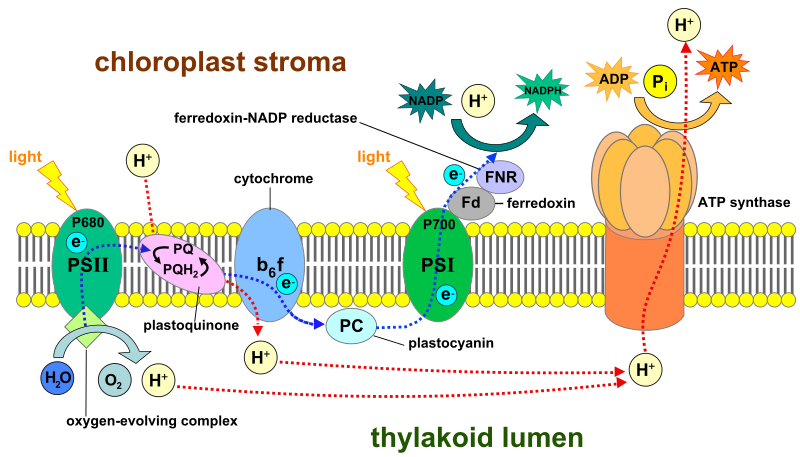 The dark reaction is also called the Calvin cycle. It occurs in the stroma of chloroplast. Calvin cycle proceeds through three phases: carbon fixation, reduction and ribulose regeneration. The end product of the Calvin cycle is glyceraldehyde-3-phosphate, which can be doubled to form glucose or fructose. 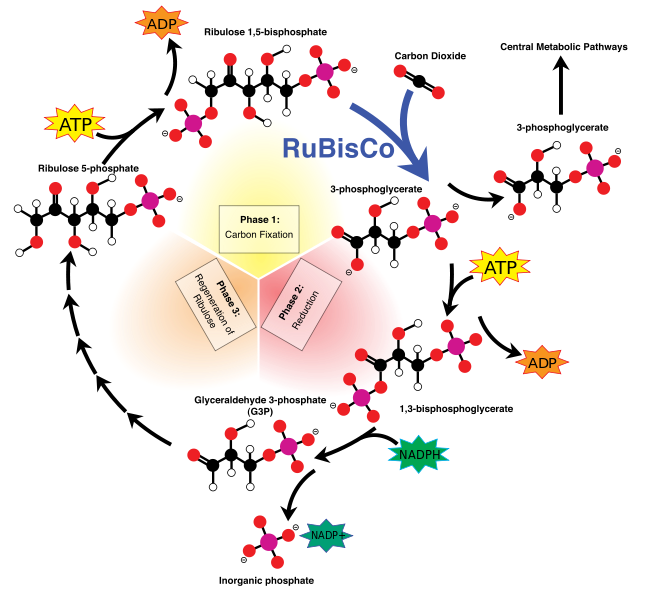 Chloroplasts are also capable of producing all amino acids and nitrogenous bases of the cell by themselves. This eliminates the requirement of exporting them from the cytosol. Chloroplasts also participate in the plant’s immune response for the defence against pathogens.

A mitochondrion is a membrane-bound organelle found in all eukaryotic cells. The chemical energy source of the cell, which is the ATP, is generated in the mitochondria. Mitochondria also contain their own DNA inside the organelle. 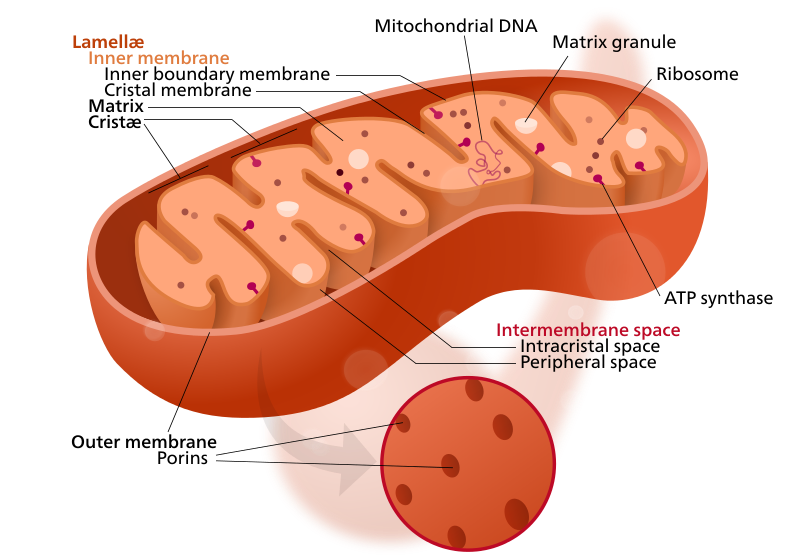 A mitochondrion consists of two membranes – inner and the outer membrane.

Mitochondria produce chemical energy in the form of ATP to use in cellular functions in the process called respiration. The reactions involved in the respiration are collectively called citric acid cycle or Krebs cycle. The citric acid cycle occurs in the inner membrane of mitochondria. It oxidises pyruvate and NADH produced in the cytosol from glucose with the aid of oxygen. 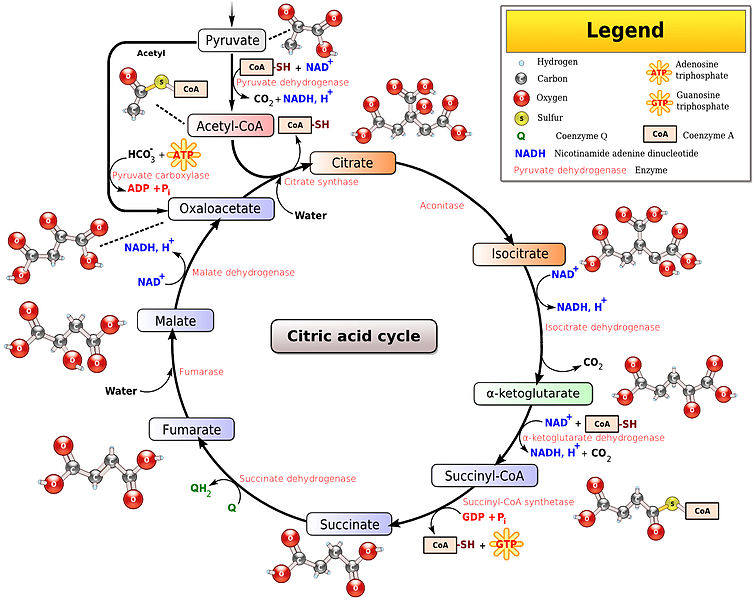 NADH and FADH2 are the carriers of redox energy generated in the citric acid cycle. NADH and FADH2 transfer their energy to O2 by going through the electron transport chain. This process is called the oxidative phosphorylation. Protons released from the oxidative phosphorylation are used by ATP synthase to produce ATP from ADP. A diagram of electron transport chain is shown in figure 6. The produced ATPs pass through the membrane using porins. 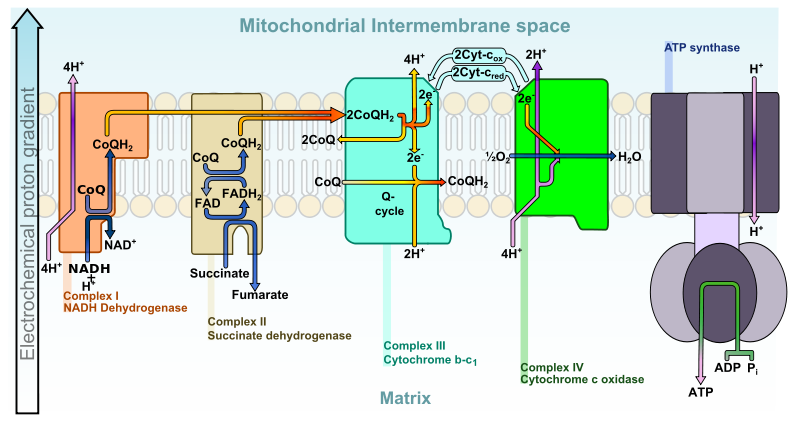 Other Functions of Mitochondria

Difference Between Chloroplast and Mitochondria

Chloroplast: Chloroplasts are found in plant and algal cells.

Mitochondria: Mitochondria are found in all, aerobic eukaryotic cells.

Chloroplast: Chloroplasts are disk-like in shape.

Chloroplast: Thylakoids form stacks of disks which are called grana.

Mitochondria: Cristae do not form grana.

Chloroplast: Two compartments can be identified: thylakoids and stroma.

Mitochondria: Two compartments can be found: cristae and the matrix.

Chloroplast: Chlorophyll and carotenoids are present as photosynthetic pigments in the thylakoid membrane.

Mitochondria: No pigments can be found in mitochondria.

Mitochondria: Mitochondria convert sugar into chemical energy which is ATP.

Chloroplast: Chloroplasts use CO2 and H2O in order to build up glucose.

Chloroplast: Photosynthesis and photorespiration occur in the chloroplast.

Chloroplasts and mitochondria both are membrane-bound organelles which are involved in energy conversion. Chloroplast stores light energy in the chemical bonds of glucose in the process called as photosynthesis. Mitochondria convert the light energy stored in glucose into chemical energy, in the form of ATP which can be used in the cellular processes. This process is referred to as cellular respiration. Both of the organelles utilise CO2 and O2 in their processes. Both chloroplasts and mitochondria involve in cellular differentiation, signalling and cell death other than their main function. Also, they control the cell growth and cell cycle. Both organelles are considered as originated through endosymbiosis. They contain their own DNA. But, the main difference between chloroplasts and mitochondria is with their function in the cell.