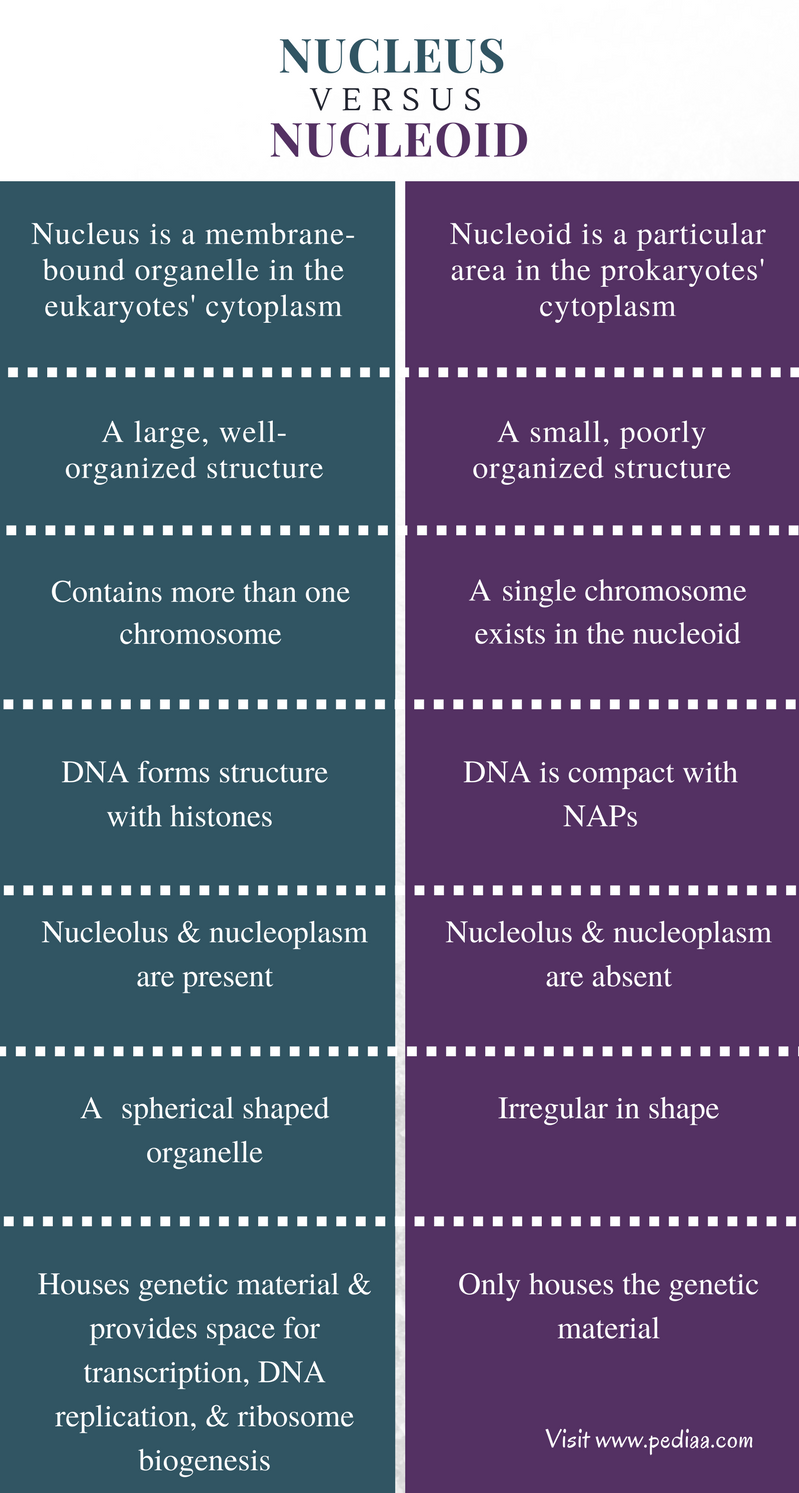 What is a Nucleus

The nucleus is a membrane-bound organelle which houses the eukaryotes’ genetic material. Most eukaryotic cells contain a single nucleus. The integrity of genes is maintained by the nucleus. It also controls the gene expression. DNA replication, transcription and ribosome biogenesis occur in the nucleus.

Structure and Composition of Nucleus

Figure 1: Nucleus and the nucleoid

Nucleoid is an area in the cytoplasm which houses the prokaryotes’ genetic material. It is an irregular-shaped region. Nucleoid is also called the genophore. The nucleoid is not surrounded by nuclear membranes, unlike eukaryotic nucleus. A single, circular chromosome can be found in the nucleoid of prokaryotes. This chromosome consists of a double-stranded DNA piece. The length of the DNA molecule can be at least a few million base pairs. In addition to this chromosome, some of the genes can be found as circular plasmids inside the cytoplasm of prokaryotes.

The nucleoid can be observed clearly apart from the cytosol under the electron microscope. By staining the DNA with Feulgen stain, the nucleoid can be visualized under the light microscope. In the fluorescent microscopy, ethidiun bromie is widely used to stain nucleoids. The nucleoid in a cell is shown in figure 1. The structure of the nucleoid of some bacteria may change due to exposure to UV. E. coli nucleoid becomes compact with the exposure to UV and this compaction leads to the activation of RecA, which is a DNA damage repair protein.

The nucleoid is composed of 60% DNA. In addition to DNA, it is composed of RNA and proteins. Most of the RNAs are messenger RNA and most of the proteins are transcription factor proteins. These RNA and proteins regulate the gene expression in prokaryotes. These proteins can also associate with DNA to form nucleoid proteins or nucleiod-associated proteins (NAPs). Examples of NAPs are HU, DPS, Fis, H-NS and CbpA. They help the DNA aggregation, bridging, and bending. H-NS, Fis and HU like NAPs form clusters which help to compact specific genomic regions locally or scattered throughout the chromosome. These NAPs also help to coordinate the events of transcription, sequestrate specific genes spatially and regulate the sequestrated genes. On the other hand, histones promote DNA looping. In prokaryotes, histones do not form nucleosomes in the nucleoid.

Difference Between Nucleus and Nucleoid

Nucleus: Nucleus is a membrane-bound organelle in the eukaryotes’ cytoplasm.

Nucleoid: Nucleoid is a particular area in the prokaryotes’ cytoplasm.

Nucleus: This is a large, well-organized structure.

Nucleoid: This is a small, poorly organized structure.

Nucleus: It contains more than one chromosome.

Nucleoid: A single chromosome exists in the nucleoid.

Nucleus: DNA forms structure with histones which is called chromatin.

Nucleoid: DNA is compact with NAPs.

Nucleus: Nucleolus and nucleoplasm are present.

Nucleoid: Nucleolus and nucleoplasm are absent.

Nucleus: DNA, RNA, enzymes, histones, dissolved ions, and other sub-nuclear bodies can be found in the nucleus.

Nucleoid: DNA, RNA, histones and other proteins for the compaction are found in the nucleoid.

Nucleus: It is a spherical shaped organelle.

Nucleoid: Nucleoid is irregular in shape.

Nucleus: It houses the genetic material and provides the space for transcription, DNA replication, and ribosome biogenesis.

Nucleoid: It only houses the genetic material.

Nucleus and nucleoid house the genetic material of eukaryotes and prokaryotes, respectively. The nucleus is a highly organized structure compared to nucleoid. Nucleus is composed of nucleoplasm and nuclear lamina. Nucleus also contains enzymes required for transcription, DNA replication, and ribosome biogenesis. Ultimately, the nucleus provides space for enzymatic reactions to occur. But, nucleoid is a region in the prokaryotic cytoplasm which only houses DNA. This is the main difference between nucleus and nucleoid.