What is DNA Replication

DNA replication is referred to as the production of two exact replicas of DNA from an original DNA molecule. The genetic information stored in the DNA is inherited through the progeny by the replication of DNA. During replication, both DNA strands serve as templates. Hence, DNA replication is considered to occur in a semiconservative manner.

DNA polymerase synthesises the new strand by adding nucleotides which are complementary to the template. The addition of nucleotides occurs in the 3′ to 5′ direction, starting from the 3′ end of the existing nucleotide chain. Sugar-phosphate backbone is formed by the phosphodiester bond formation between the proximal phosphate group and the 3′ OH of the pentose ring of incoming nucleotide. Topoisomerase, helicase, DNA primase and DNA ligase are the other enzymes involved in the DNA replication. DNA replication is terminated at the telomeric regions of the chromosome.

In vitro DNA replication is carried out by the aid of artificial DNA primers and DNA polymerases, which are isolated from bacteria. Polymerase chain reaction (PCR) is the molecular biological technique used for in vitro replication of DNA. The enzyme used in PCR is Taq polymerase. By using a pair of DNA primers, PCR synthesises DNA fragments from a known sequence.

Transcription is the process of copying a DNA sequence into RNA by the aid of the enzyme, RNA polymerase. Genes are transcribed into mRNAs in order to initiate the gene expression. RNA polymerase synthesises the mRNA primary transcript by reading the antisense DNA strand from 3′ to 5′ direction. The resulting RNA strand is complementary and antiparallel to the template. It is synthesised from 5′ to 3′ direction. A gene consists of both coding sequence and regulatory sequences. Coding sequence encodes the amino acid sequence of a protein whereas the regulatory sequences regulate the gene expression. 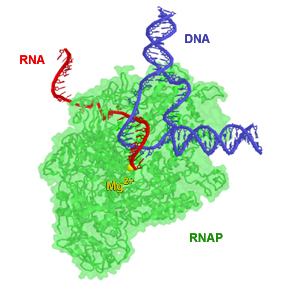 Difference Between DNA Replication and Transcription

DNA Replication: It transmits the entire genome to its offspring.

Transcription: It generates RNA copies of a particular gene.

Occurrence in the Cell Cycle

DNA Replication: It occurs in the S phase when the cell is preparing for the division.

Transcription: It occurs in G1 and G2 phases when the cell needs to synthesise proteins.

Transcription: It utilises ATP, UTP, GTP and CTP as precursors.

Length of the Newer Strand

DNA Replication: DNA polymerase requires an RNA primer for the initiation of the replication.

Transcription: Transcription occurs only in 5′ to 3′ direction, excluding the Okazaki fragments.

Transcription: The mRNA, tRNA, rRNA and non-coding RNA such as microRNA are produced.

Fate of the Products

Transcription: Greater part of the product passes into the cytoplasm.

Lifespan of the Products

Transcription: Most of the RNAs are degraded even before functioning.

DNA replication occurs when the cell is preparing for the cell division. Thereby, the whole genome of an organism undergoes replication at once. Hence, both of the strands serve as templates for the replication. In the replication fork, leading strand is synthesised continuously, and the lagging strand is synthesised through Okazaki fragments. Finally, DNA polymerases should maintain high levels of fidelity, since the replica is going to be the genome of the offspring. In transcription, genes are copied into RNA in order to synthesise proteins for the cellular functions. Only the antisense strand is transcribed since RNA is a single stranded molecule. RNA polymerases maintain less fidelity compared to DNA polymerases since RNAs are short-lived. Therefore, the key difference between DNA replication and transcription is in their ultimate products.