Genetic information of a cell is stored in chemical form in DNA or RNA. The order of the nucleotide bases arranged in the polynucleotide chain determines the genetic instructions. A gene is a sequence stretch of nucleotides which encodes a specific protein. Humans have thousands of genes in their total DNA molecules. The entire nuclear DNA is called the genome of an organism. This DNA is packed into chromosome structures. All gene sequences are called non-repetitive DNA. A genome has many DNA sequences and these are called repetitive DNA. This repetitive DNA also has a function in the gene regulation. The key difference between gene and genome is that a gene is a locus on a DNA molecule whereas genome is a total nuclear DNA. 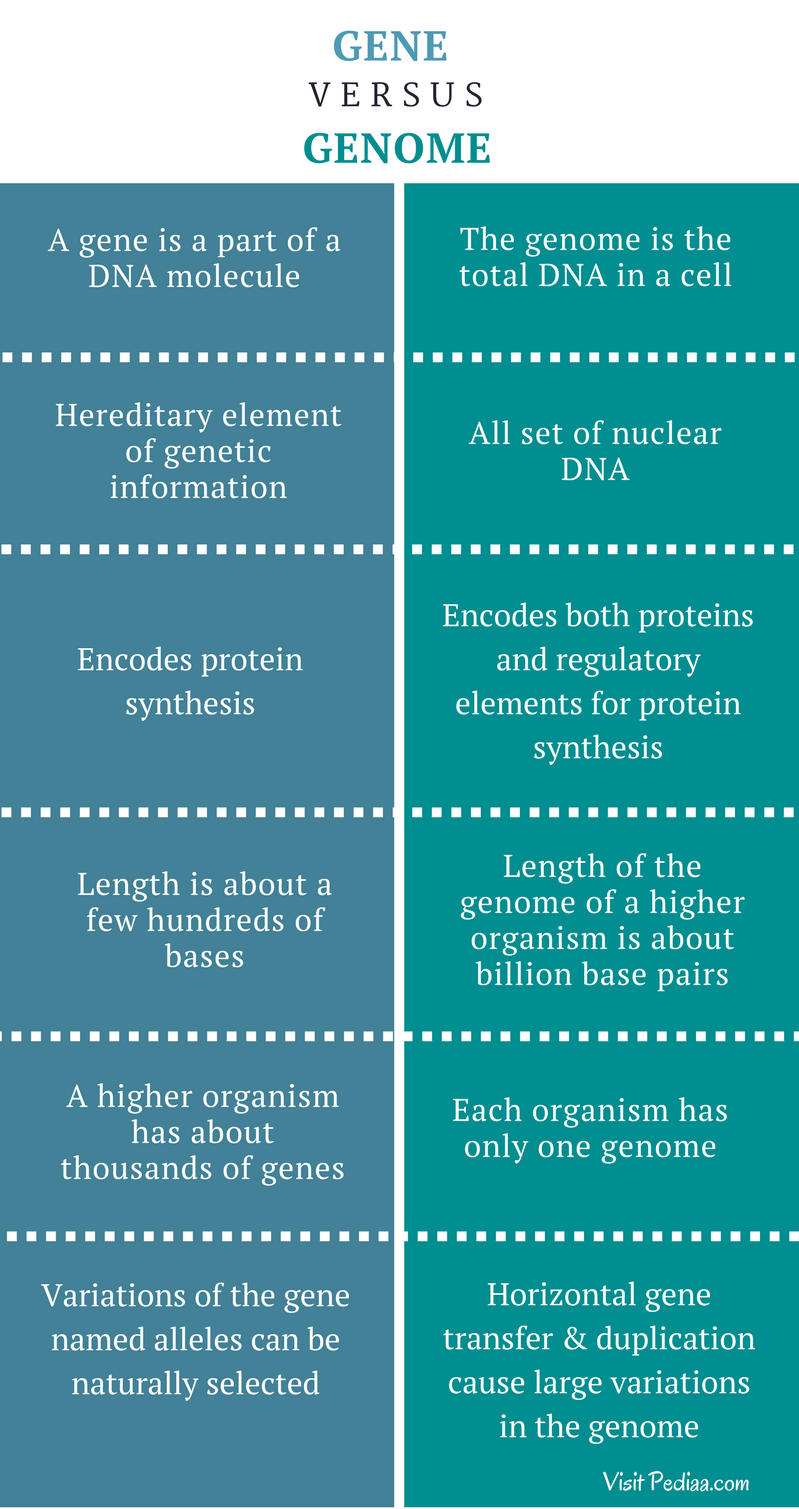 A gene is a locus or a sequence stretch on the DNA polynucleotide strand. It encodes an amino acid sequence of a specific protein and is recognized as the molecular unit of hereditary. The genetic instructions transfer into progeny through genes via reproduction. Thousands of genes can be found within a single DNA molecule of higher organisms. A gene sequence is transcribed into RNA; RNA is translated into proteins which consequently determine traits. This is the central dogma of molecular biology.

The concept of the gene and its pattern of inheritance originated with the findings of  Gregor Mendel in 1860s. The study of the properties of genes or group of genes is referred to as genetics. Most genes are made up of DNA but a few may be made of RNA. Some viruses are made up of RNA genes since their genetic material is RNA. In prokaryotes, operons are formed by grouping the functionally related genes. The multiple protein-coding sequences are transcribed together. Eukaryotic gene structure is mainly composed of two regions: coding sequence and the regulatory sequence. Eukaryotic coding sequence consists of exons, introns and untranslated regions whereas prokaryotic genes lack introns. Genes are transcribed with the introns. Consequently, they are removed by splicing of exons. On the other hand, multiple proteins can be produced by alternative splicing. Gene expression is regulated at transcriptional and translational level. Variations of a gene are referred to as its alleles. Different alleles of the same gene produce different phenotypes among the population. 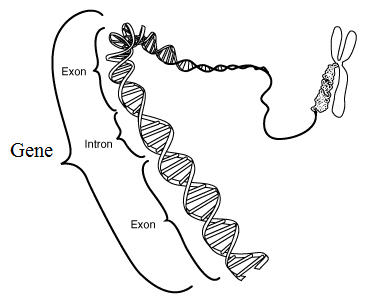 What is a Genome

The genome consists of both coding genes and non-coding junk DNA. The size of the genome increases proportionately to the morphological complexity of organisms. The human genome contains 3.2 billion base pairs. It consists of about 25,000 genes in it. Most DNA sequences in the human genome contain junk DNA. DNA polynucleotide chains are organized into individual chromosomes. The human genome is composed of 22 homologous pairs of autosomes and 2 sex chromosomes. Some organisms are composed of multiple copies of genomes. An organism, which has a single copy of genome is called a haploid organism. Multiple copies are called diploid, triploid and tetraploid. The human genome is a diploid genome. Sexually reproducing organisms have half of the chromosome number in gametes compared to their somatic cells.

A genome of a unique organism is referred to as the genetic makeup of that particular organism. The human genome was fully sequenced and mapped by the Human Genome Project. Horizontal gene transfer and the duplication of sequences cause the genome evolution. Duplication can be the duplication of gene clusters, short tandem repeats, whole chromosomes or even the entire genome. Genomics is the study of genomes of the related organisms. 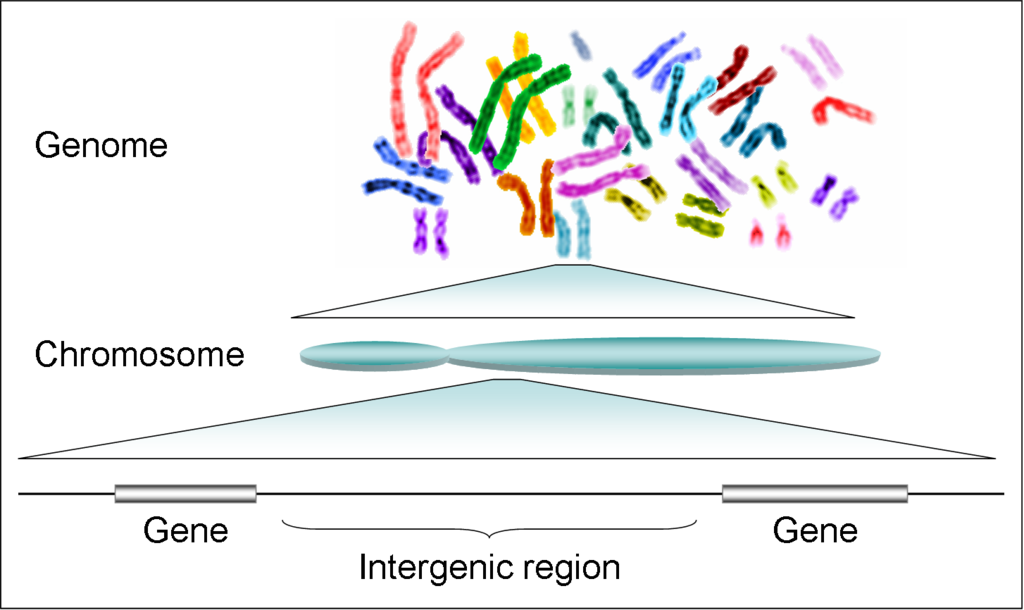 Difference Between Gene and Genome

Gene: The gene is the hereditary element of genetic information. It is a locus within a chromosome.

Genome: The genome is the all set of nuclear DNA. Most of the times DNA exists as chromosomes.

Gene: A gene is a part of a DNA molecule.

Genome: The genome is the total DNA in a cell.

Genome: A genome encodes both proteins and regulatory elements for protein synthesis.

Gene: The length of a gene is about a few hundreds of bases.

Genome: The length of the genome of a higher organism is about billion base pairs.

Gene: A higher organism contains about thousands of genes.

Genome: Each organism contains only one genome.

Contribution to the Evolution

Gene: Variations of the gene are referred to as alleles. These alleles can be naturally selected.

Genome: Horizontal gene transfer and the duplication cause large variations in the genome.

Gene: The study of the properties of the genes is genetics.

Genome: The study of the properties of the related genomes is genomics.

The variations of the gene which are called alleles are created by point mutations. Point mutations occur at base pair level. On the other hand, the changes that occur at the genome level is comparatively large. Horizontal gene transfer and gene duplication introduce and increase the gene product respectively. Hence, the main difference between gene and genome is in the size of the nucleotides carried by them.