The meiotic division is divided into meiosis 1 and meiosis 2. Gametes required for the sexual reproduction of organisms are produced through meiosis. Both stages of meiosis 1 and 2 consist of four phases: prophase, metaphase, anaphase, and telophase. Homologous tetrads are divided into two daughter cells at the meiosis 1. The resulting bivalent chromosomes in one daughter cell are divided into two daughter cells, containing single sister chromatids in each. Four daughter cells are formed, containing a single sister chromatid of each chromosome from the parent cell. The main difference between meiosis 1 and meiosis 2 is that during meiosis 1, chromosomal cross-over occurs at the prophase 1, leading to the genetic recombination whereas no chromosomal cross-over is identified during meiosis 2.

Meiosis 1 is the initial period of the cell cycle and is followed by meiosis 2. During meiosis 1, homologous chromosomes are separated into two daughter cells, reducing the chromosome number by half, relative to the parent cells’ chromosome number. Meiosis 1 is composed of four phases: prophase 1, metaphase 1, anaphase 1 and telophase 1. During prophase 1, homologous chromosomes are paired by an event known as synapsis. During synapsis, genetic variation is allowed by two ways. First is the independent orientation of the pairs of the homologous chromosomes in the cell equator. This is called the law of independent assortment, allowing the segregation of maternal and paternal chromosomes in a random nature. Secondly, the chromosomal cross-over at chiasmata of non-sister chromatids during prophase 1 allows the genetic recombination of chromosomes to occur, resulting in new combinations of alleles in the inherited chromosomes. 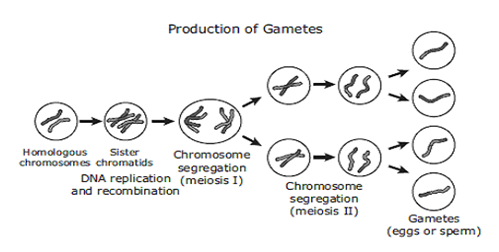 After the completion of telophase 1, new nuclear envelopes are formed surrounding the chromosomes in the opposite poles. Telophase 1 is followed by interkinesis, which is a resting phase by separating the two daughter cell’s cytoplasm.

The second division of meiosis is meiosis 2 which is involved in the equal segregation and separation of bivalent chromosomes. Meiosis 2 is only physically similar to the mitosis (vegetative cell division), not genetically since it produces haploid cells, which are used as gametes later, starting from diploid cells. Meiosis 2 proceeds through four sequential phases: prophase 2, metaphase 2, anaphase 2 and telophase 2.

During prophase 2, nuclear envelop and nucleolus disappear, thickening the chromatids to form chromosomes. A new pair of centrosomes appears in the opposite poles of the second cell equator, which is in a rotated position by 90 degrees relative to the meiosis 1 cell equator. The second spindle apparatus is formed from the two, new centrosomes. During metaphase 2, centromeres of the individual chromosomes are attached to the two kinetochore microtubules from either side. The chromosomes are aligned on the second cell equator.

During anaphase 2, centromeric cohesins are cleaved, segregating the two sister chromatids. During telophase 2, separated sister chromatids, which are known as the sister chromosomes, are moved towards the opposite poles by the contractions of the kinetochore microtubules. Decondensation of chromosomes, as well as the disassembling of the spindle apparatus, mark the end of the telophase 2. The nuclear envelopes and nucleoli are formed, following the division of the cytoplasm, which is known as the cytokinesis.

Difference Between Meiosis 1 and Meiosis 2

Meiosis 1: Meiosis 1 is a heterotypic division, reducing the chromosome number in the daughter cell by half, compared to the parent cell.

Meiosis 2: Meiosis 2 is a homotypic division, equalizing the chromosome number of both parent and daughter cells.

Meiosis 1: Homologous chromosomes are present at the beginning of meiosis 1.

Meiosis 2: Individual, bivalent chromosomes are present at the beginning of meiosis 2.

Meiosis 1: Prophase 1, metaphase 1, anaphase 1 and telophase 1 are the four phases in the meiosis 1.

Meiosis 2: Prophase 2, metaphase 2, anaphase 2 and telophase 2 are the four phases in the meiosis 2.

Meiosis 1: Individual chromosomes are present in the daughter nuclei.

Meiosis 2: Sister chromosomes, which are derived from sister chromatids are present in the daughter nuclei.

Number of Daughter Cells at the End

Meiosis 2: Meiosis 2 is comparatively simple and less time is taken for the division.

Meiosis 1: Interphase is followed by meiosis 1.

Meiosis 2: No interphase takes place prior to the meiosis 2. A resting phase, interkinesis can occur.

Cleavage of the Cohesin Complex

Meiosis 1: Cohesin protein complexes at the arms of the homologous chromosomes are cleaved.

Meiosis 2: Cohesins at the centromeres are cleaved in order to separate the two sister chromatids.

Meiosis is the mechanism of producing gametes during the organisms’ sexual reproduction. Meiosis occurs through two stages, meiosis 1 and meiosis 2. Each stage is composed of four phases, prophase, metaphase, anaphase and the telophase. During meiosis 1, homologous chromosomes pair follow the law of independent assortment. Chromosomal cross-over takes place between non-sister chromatids at chiasmata, leading to produce new combinations of alleles through genetic recombination. Homologous chromosomes of a diploid parent cell are separated into two haploid daughter cells at meiosis 1. Meiosis 2 is similar to the mitotic cell division, equalizing the number of chromosomes in a parent cell produced at meiosis 1 and daughter cell, produced by meiosis 2. The main difference between meiosis 1 and meiosis 2 is that genetic recombination occurs in meiosis 1 and no recombination of DNA can be observed in meiosis 2.