The main difference between moss and lichen is that a moss is a bryophyte, which is a primitive plant with undifferentiated plant body into stem, leaves, and roots whereas lichen is the result of a symbiotic relationship between fungus and algae or cyanobacteria. Furthermore, mosses are autotrophs that can capture sunlight in a process known as photosynthesis while fungus in the lichen uses organic compounds produced by algae or cyanobacteria for energy.

Moss and lichen are primitive types of organisms in the production of animal fodder, dyes, and medicines, in ornamentation, and religious practices. 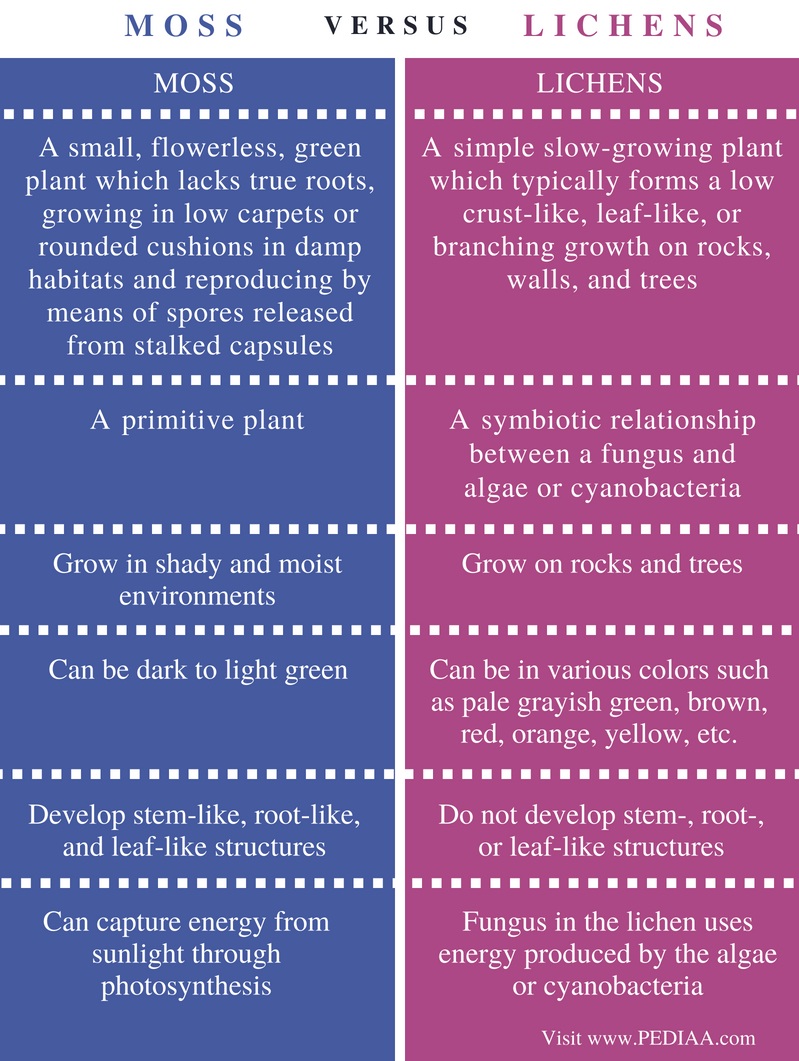 What is a Moss

A moss is a type of bryophyte, which is a simple, non-vascular plant. It undergoes alteration of generations with a prominent gametophyte stage. Sporophyte grows on the gametophyte, producing spores in a capsule. The capsule is held by a stalk. Protonema is the filamentous structure produced upon germination of spores and it grows developing a leafy-stemmed structure or the gametophyte. The leaves grow in a spiral arrangement around the stem. The root-like structures of the gametophyte are called rhizoids. They are multicellular and their main function is to attach the plant to the substrate. 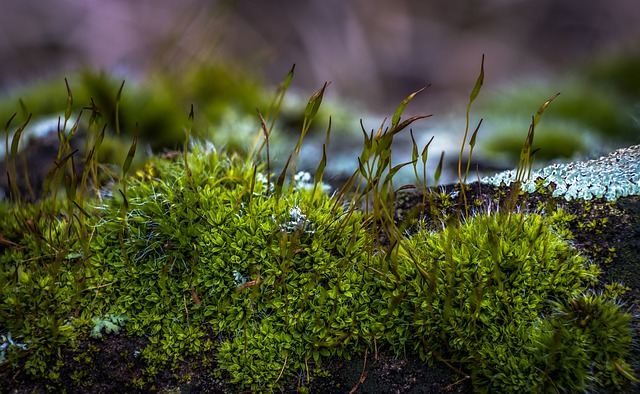 Figure 1: A Moss with Sporophytes

What is a Lichen

A lichen is a composite organism that maintains a symbiotic relationship. Formation of a lichen involves one or multiple fungi and algae or cyanobacteria. Lichens can be identified in many colors, sizes, and forms. Due to the presence of tiny, leafless branches called fruitcose or flat-leaf-like branches called foliose, lichens are often confused with mosses. But, lichens are not plants like mosses. Some other forms of lichens can be the flakes, which lie on the surface called crustose and the powder-like leprose. 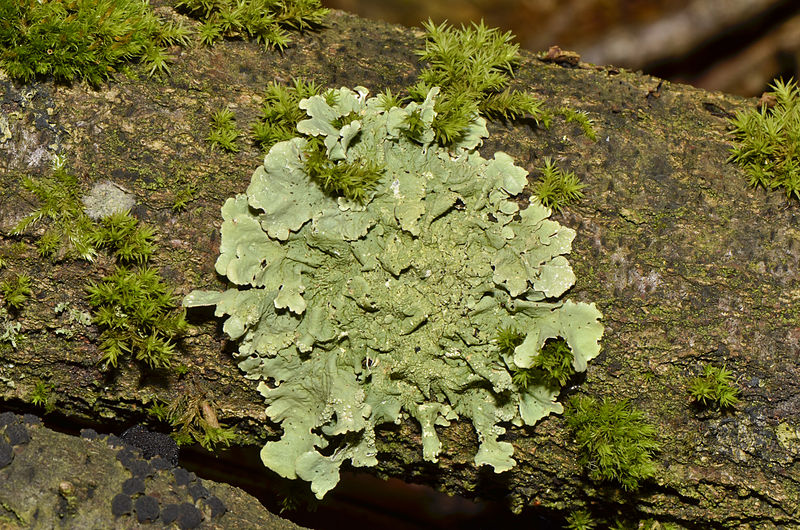 Filaments of the fungi form rhizoids, which attach the lichen on the surface of the substrate.

Similarities Between Moss and Lichen

Difference Between Moss and Lichens

A moss refers to a small, flowerless, green plant which lacks true roots, growing in low carpets or rounded cushions in damp habitats and reproducing by means of spores released from stalked capsules while a lichen refers to a simple slow-growing plant which typically forms a low crust-like, leaf-like, or branching growth on rocks, walls, and trees.

The moss is a primitive plant while the lichen is a symbiotic relationship between a fungus and algae or cyanobacteria.

Mosses grow in shady and moist environments while lichens grow on rocks and trees.

Mosses can be dark to light green while lichens can be in various colors such as pale grayish green, brown, red, orange, yellow, etc.

Moss can capture energy from the sunlight through photosynthesis while the fungus in the lichen uses energy produced by the algae or cyanobacteria.

A moss is a primitive plant, which belongs to the bryophytes. It does not contain differentiated plant structures such as stem, roots or leaves. It is photosynthetic. On the other hand, a lichen is a composite organism made up of filamentous fungi and algae or cyanobacteria. The main difference between moss and lichen is the organization.