The main difference between blazer and coat is that blazers have natural shoulders with casual cuts while coats have suit shoulders, just like shirts. 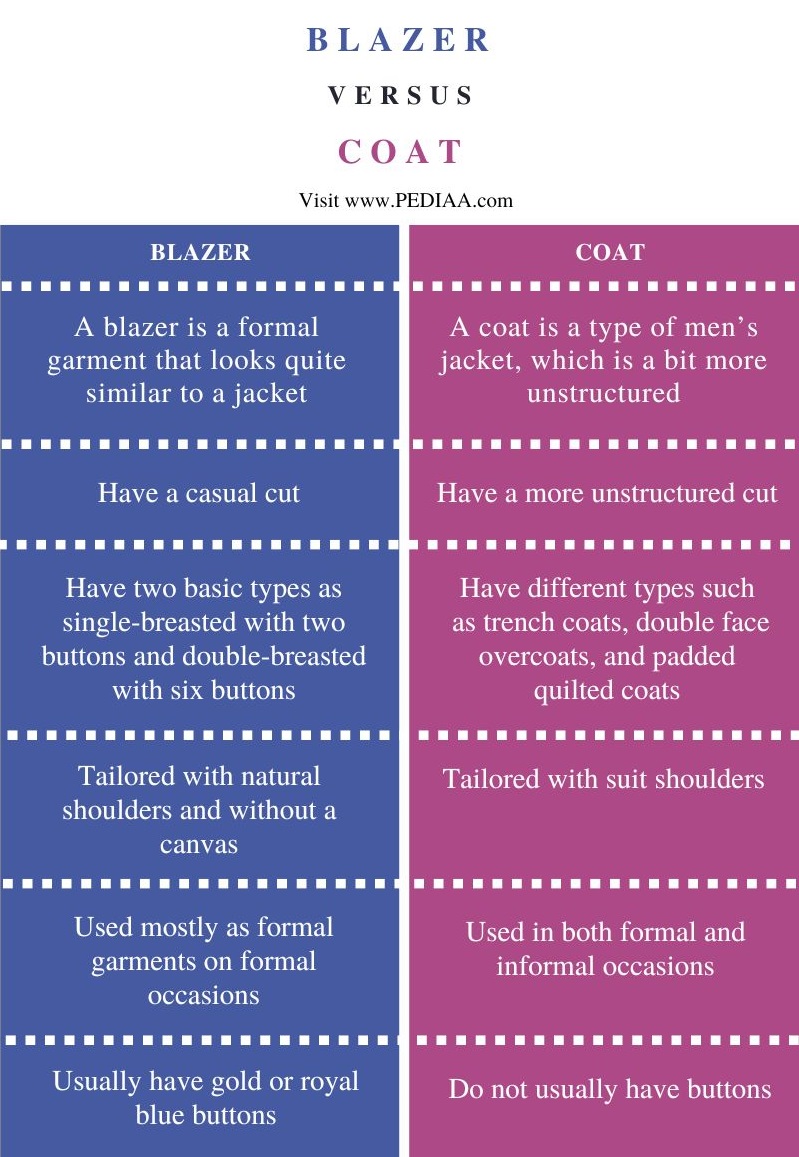 What is a Blazer

A blazer is a formal garment that looks quite similar to a jacket. Nevertheless, it is different from a jacket since it has a more casual cut. Also, blazers have naval-style buttons and are fabricated with solid color fabrics. Moreover, concerning their uses, people wear blazers mostly as formal garments on formal occasions. In some cases, blazers are used as uniforms, especially for airline officers, students at schools as well as players of sports teams.

Blazers typically have two different styles. One is single-breast with two buttons, and the other one is double-breast with six buttons. In addition, they also have patch pockets. With distinct color ranges, many school students in countries like Britain, Ireland, Australia, the United Kingdom, and New Zealand wear blazers. Single-breasted with bright color blazers are worn by some boat clubs.

What is a Coat

A coat refers to a type of men’s jacket, and it is a bit more unstructured. Coats are generally fabricated from textured weaves and fabrics. There are different patterns in coats, such as trench coats, double face overcoats, and padded quilted coats. These different types of coats we use for different purposes. The fabrics we use to tailor coats look more casual. 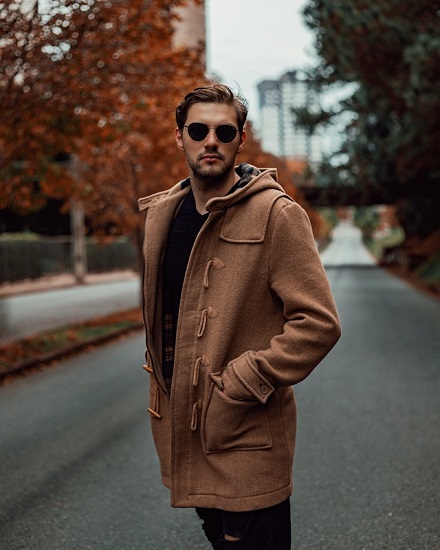 A coat consists of general features like natural shoulders. Moreover, a coat does not have an inner canvas. This absence of canvas makes it more comfortable, and it feels light to the body. With the arrival of new and different designs, coats are easy to carry from one place to another. Although the fabrics of coats look casual, people wear coats for both casual and formal instances. Although the original design of the coat was only for men, with various new designs and trends, in modern fashion, both men and women wear them. Most of the time, the main purpose of wearing a coat is to protect from cold weather. People usually wear coats to keep themselves warm on cold days. In addition, we can tailor coats using any fabric materials like cotton and linen.

Similarities Between Blazer and Coat

Difference Between Blazer and Coat

A blazer is a formal garment that looks quite similar to a jacket, while a coat is a type of men’s jacket, which is a bit more unstructured.

Although blazers have casual cuts, coats have more unstructured cuts.

Blazer has two basic types; they are single-breasted with two buttons and double-breasted with six buttons. Whereas, the coats have different types such as trench coat, double face overcoat, and padded quilted coat.

People wear blazers mostly as formal garments on formal occasions, whereas coats mainly provide protection from cold weather. Moreover, there are occasions where people use blazers as uniforms; for example, school students, airline officers, etc. On the other hand, people use coats on both formal and informal occasions.

Blazers and coats are two outer garments both men and women wear for many occasions. The main difference between blazer and coat is that blazers have natural shoulders with casual cuts while coats have suit shoulders, just like shirts.

1. “Guy-man-fashion-violet-blazer” (CC0) via Pixabay
2. “Man in Brown Coat Standing on the Street” (CC0) via Pexles