Carotene and xanthophyll are the two classes of carotenoids, which are tetraterpene plant pigments, serving as accessory pigments in photosynthesis. They are responsible for giving red-orange to yellow color, especially to fruits and vegetables. 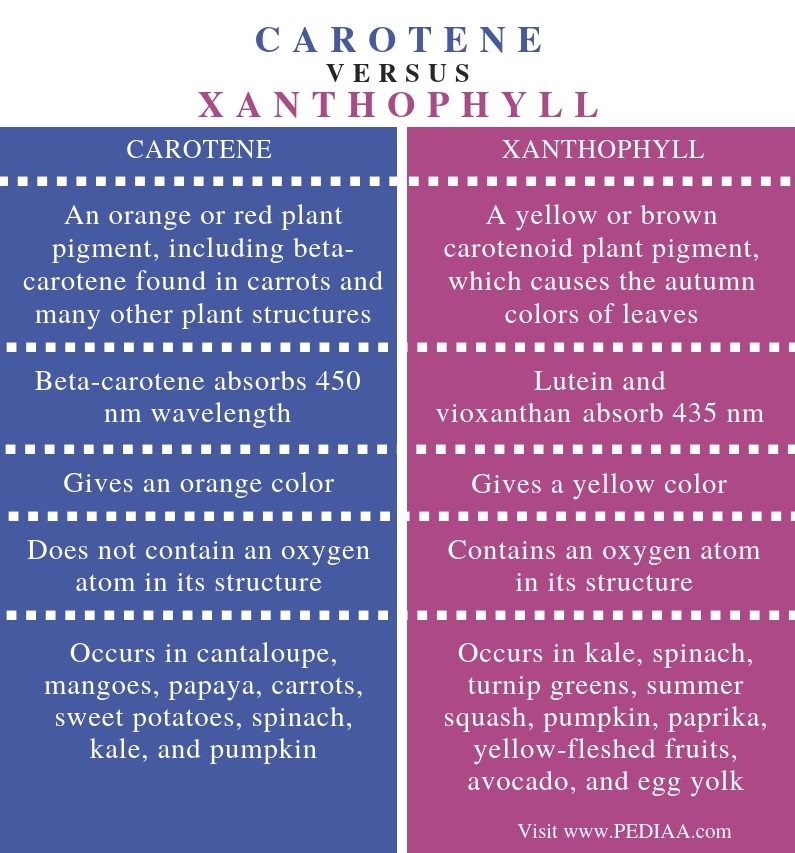 Carotene is one of the two types of carotenoids present in plants responsible for the orange color of the plant. Generally, carotenoids are organic pigment only produced by photosynthetic organisms including plants, algae, and bacteria. The main function of carotenoids is to serve as accessory pigments in photosynthesis. Although animals cannot synthesize carotenoids inside their body, these compounds play a key role as antioxidants and anti-inflammatory molecules. 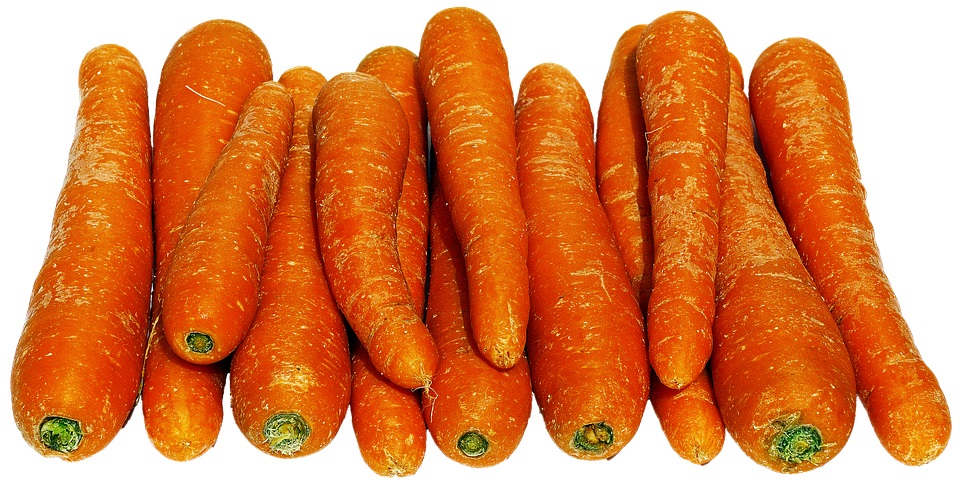 Furthermore, the main structural feature of carotenes used to distinguish them from xanthophyll is the absence of any oxygen atoms in the molecule. Also, there are four main types of carotenes as β-carotene, α-carotene, and lycopene. Mainly, β-carotene and, to a certain extent, α-carotene are responsible for the synthesis of vitamin A inside the animal body. Looking at the sources, β-carotene occurs in cantaloupe, mangoes, papaya, carrots, sweet potatoes, spinach, kale, and pumpkin while α-carotene occurs in pumpkin, carrots, tomatoes, collards, tangerines, winter squash, and peas. Whereas, lycopene occurs in watermelons, tomatoes, guavas, and grapefruit. 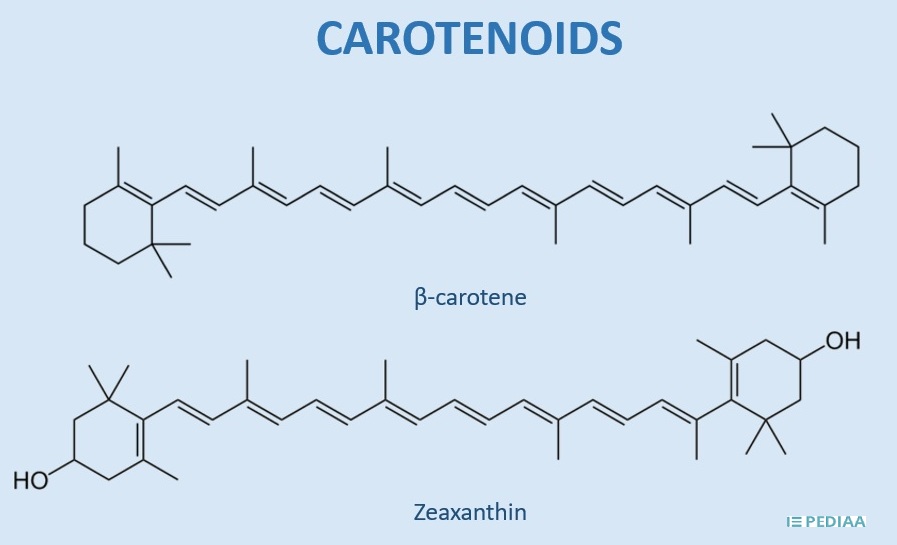 Also, two types of xanthophylls known as lutein and zeaxanthin occur in the macula lutea or the yellow spot in the retina of the human eye. They are responsible for the central vision of the eye. Moreover, they protect the eye from the blue light. Therefore, kale, spinach, turnip greens, summer squash, pumpkin, paprika, yellow-fleshed fruits, avocado, and egg yolk are good sources of lutein and zeaxanthin. In general, these two xanthophylls are effective in age-related macular degeneration (AMD), which leads to blindness. Furthermore, lutein is known to prevent the atherosclerosis formation due to its antioxidant effect on cholesterol, which in turn prevents the building up of cholesterol in arteries.

Similarities Between Carotene and Xanthophyll

Difference Between Carotene and Xanthophyll

Carotene refers to an orange or red plant pigment, including beta-carotene found in carrots and many other plant structures while xanthophyll refers to a yellow or brown carotenoid plant pigment which causes the autumn colors of leaves. Thus, this is the main difference between carotene and xanthophyll.

Βeta-carotene, which is a carotene, absorbs 450 nm wavelength, while lutein and vioxanthan, which are xanthophylls, absorb 435 nm. Hence, this is another difference between carotene and xanthophyll.

Also, the color produced by each is another  difference between carotene and xanthophyll. While carotene gives an orange color, xanthophyll gives a yellow color.

Carotene is one of the two types of carotenoids that mainly occur in plant parts including fruits and vegetables. It is responsible for giving an orange color to the plant. Additionally, it does not contain any oxygen atoms in its structure. In contrast, xanthophyll is the other type of carotenoid responsible for giving a yellow color to the plant. Significantly, it contains a single oxygen atom in its structure. Both carotene and xanthophyll serve as accessory pigments which capture and pass sunlight to chlorophyll a. However, the main difference between carotene and xanthophyll is the color they give to the plant.