In brief, elimination and excretion are two processes of removing unwanted materials from the body of animals. Generally, excretion is a part of elimination. 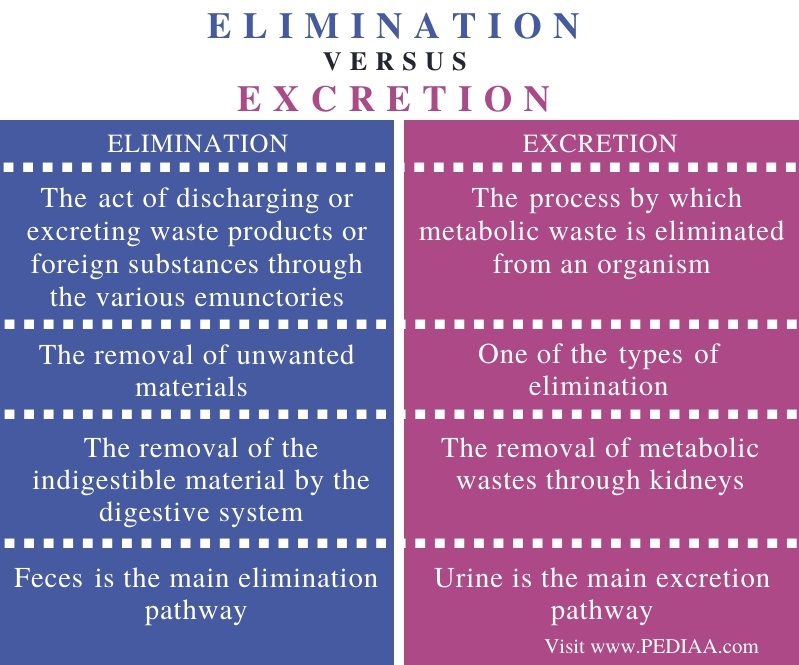 Elimination is the removal of unwanted materials out of the body. However, it mainly refers to the removal of the undigested materials through the anus. Therefore, it is the final step of digestion. Initially, undigested food enters the colon where most of the water is absorbed into the body through the intestinal wall. Therefore, this makes the undigested materials and waste products to become semi-solid. Then, these semi-solid wastes move through the colon by action of the peristaltic movements of muscles and get stored in the rectum. Finally, when the urge is step up to eliminate, wastes move into the anus by the action of the same muscular movements. 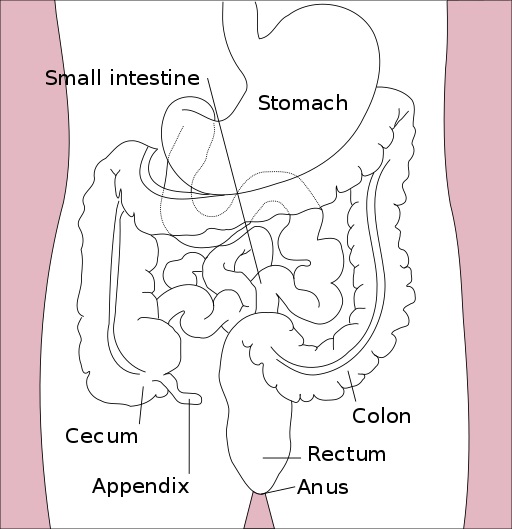 Besides the above, elimination also refers to the removal of drugs out of the body. Basically, a number of processes take part in the removal of drugs, either in the unaltered form or as a modified metabolite, from the body. Of these, kidneys are the main elimination pathway of these drugs in a process called excretion. Apart from that, the skin, liver, lungs and glandular structures, including salivary glands and lacrimal glands, are the other pathways of elimination of drugs. Therefore, the routes of elimination of drugs are urine, tears, perspiration, saliva, respiration, milk, bile, and feces.

Excretion is the main pathway of the elimination of metabolic wastes out of the body. Here, the main organs that take part in the excretion process include kidneys, lungs, and skin. Also, urine is the main medium of excretion.

Explaining this further; a number of biochemical reactions occur in the body, giving rise to various waste products, including carbon dioxide, ammonia, guanine, creatine, urea, and uric acid. However, the accumulation of wastes inside the body is harmful. Therefore, in animals, the liver and kidneys clear many of the wastes products into urine and feces. 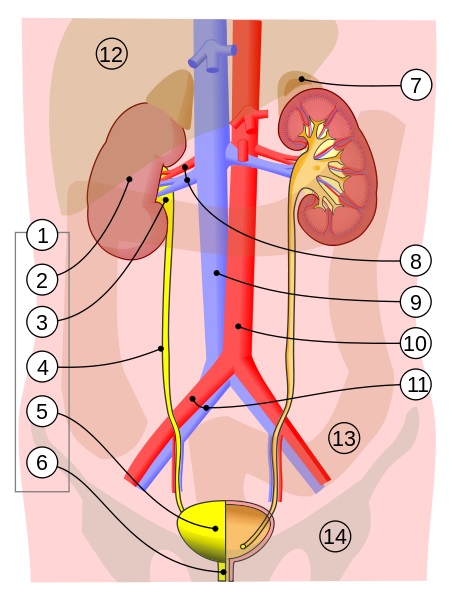 Furthermore, in different animals, excretory products vary. For example, in aquatic animals, ammonia is the main component of excretory products. But, in terrestrial animals, the ammonia is first converted into nitrogenous materials such as urea. In birds, uric acid is the nitrogenous waste product. Moreover, in green plants, carbon dioxide and water are the main metabolic waste products produced during respiration. However, in green plants, photosynthesis reuses carbon dioxide. Also, the excess water eliminates by transpiration and guttation. Meanwhile, oxygen is the waste product of photosynthesis and is eliminated mainly through stomata.

Similarities Between Elimination and Excretion

Difference Between Elimination and Excretion

Elimination refers to the act of discharging or excreting waste products or foreign substances through various emunctories. But, excretion refers to the process by which metabolic waste is eliminated from an organism.

Elimination is the removal of unwanted materials from the body, while excretion is one of the types of elimination.