The main difference between fleas and mites is that fleas belong to the order Siphonaptera under the class Insecta whereas mites belong to the subclass Acari under the class Arachnida. Furthermore, fleas are small, jumping insects that are ectoparasites of mammals and birds, while mites are tiny arthropods, similar to spiders and scorpions. Also, mites are either free-living, being decomposers and predators, or parasites.

In brief, fleas and mites are two types of small, bloodsucking creatures on humans and other animals. Also, they may serve as vectors for the transmission of several diseases.

Fleas are the small, wingless, bloodsucking insects that belong to the order Siphonaptera. Around 3000 species of fleas live on the planet. Mainly, they feed upon mammals and birds. Furthermore, the three common types of fleas are rat fleas, human fleas, and cat fleas. Also, fleas undergo complete metamorphosis in four stages, in their life cycle; the egg, larva, pupa, and adult. Typically, the adult has a narrow body, which is 1-4 mm long and is flattened sideways, enabling them to move through their host’s fur or feathers. Moreover, the main characteristic feature of fleas is their ability to jump for which their long hind legs are adapted. Also, their color can vary from white to dark. In the larval stage, it is 4-0 mm long and white in color. Although it is very mobile, it does not have legs. However, the pupal stage is very sticky to soon become covered by sand. 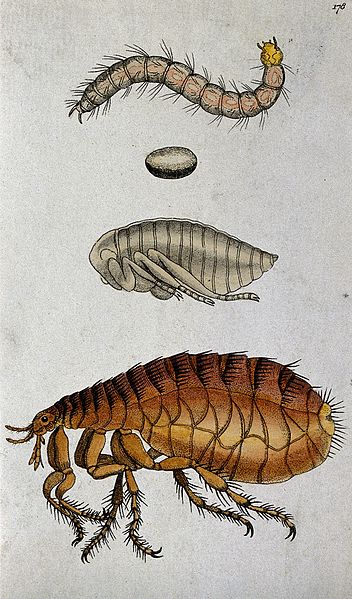 Furthermore, flea bites can cause a loss of blood, irritation, and serious discomfort. In addition to that, rat fleas serve as a vector for the transmission of diseases such as bubonic plague and flea-borne typhus. Also, cat fleas sometimes transmit tapeworms. Besides these, sand fleas or jiggers are other important types of fleas since they burrow into the human skin and cause infections. Moreover, one of the significant features of mites is that their body, containing two sections of the body; cephalothorax and abdomen. Also, they are less than 1 mm in length. Basically, mites can be free-living; many live in soil as decomposers while others live in water and on plants. However, some mites are parasites such as scabies mites in humans. Usually, these parasitic mites may cause allergies while serving as vectors for disease transmission.

Similarities Between Fleas and Mites

Difference Between Fleas and Mites

Fleas refer to the small, wingless, jumping insects that feed on the blood of mammals and birds while transmitting diseases through their bites including plague and myxomatosis. In contrast, mites refer to the minute arachnids that have four pairs of legs, relating to ticks; many live in the soil and some are parasitic on animals and plants.

The main types of fleas include human flea, cat flea, and rat flea, while the three superorders of mites include Opilioacariformes,  Parasitiformes, and Acariformes.

Fleas are small, jumping insects, while mites are tiny arthropods that are similar to spiders and scorpions.

Fleas are ectoparasites in mammals and birds, while mites are either free-living, being decomposers and predators, or parasites.

Fleas are reddish-brown or dark in color, while mites have the shades of brown and some of them can be red, orange, black or green in color.

The body surface of fleas is covered by sclerites, many hairs and short spines directed backwards, assisting its movements on the host, while the dorsal surface of the mite’s body is clad in hardened tergites and the ventral surface by hardened sclerites.

Some fleas have simple eyespots with a single biconvex lens, while some mites have one to five median or lateral eyes.

A proboscis or a stylet is the mouthpart, which occurs in fleas, while chelicerae are the mouthparts in mites.

Fleas have three pairs of long, gangly legs, highly adapted for jumping, while mites have four pairs of legs, each with six sections and adapted for swimming or other purposes.

Flea bites can be slightly itchy and cause a slightly raised, swollen, irritating nodule to form on the epidermis at the site of each bite, while mite bites cause of several types of itchy skin rashes, such as gamasoidosis, rodent mite dermatitis, grain itch, grocer’s itch, and scabies.

Fleas serve as a vector of Yersinia pestis, the bacterium that causes bubonic plague, while mites transmit infectious diseases such as rickettsialpox and scrub typhus.

Fleas are small insects with long legs adapted to jump. Also, their body has three sections; head, thorax, and abdomen. Furthermore, they undergo complete metamorphosis. Besides, fleas are ectoparasites that feed on the blood of mammals and birds. And, they transmit the bubonic plague. On the other hand, mites are a tiny form of arachnids with four legs in their body with two sections; cephalothorax and abdomen. Also, mites can be either free-living or parasitic on plants and animals. Furthermore, they transmit diseases such as rickettsialpox and scrub typhus. Therefore, in summing up, the main difference between fleas and mites is their body structure and effect on their host.