Spiders are a type of arachnids. Around 50,000 spider species can be found all over the world (except in Antarctica). The body of spiders is divided into two segments: cephalothorax and abdomen. Spiders may have up to eight, simple eyes. The eight pairs of jointed appendages or legs are connected to the cephalothorax. Cephalothorax consists of mouth fangs, brain, stomach, and glands, which produce poisons. The multiple eyes of a jumping spider are shown in figure 1. 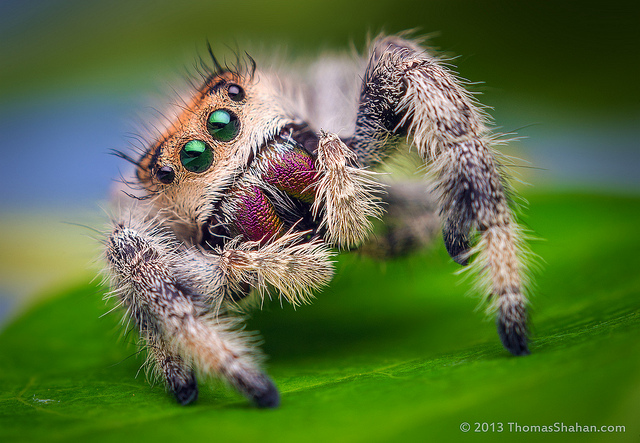 The tiny, leg-ish structures that surround the mouth fangs are called pedipalps. They hold the prey. Spiders do not have wings. The abdomen of the spiders consists of a type of glands called spinneret from which silk is released to the outside. Most spiders make their webs. Spiders secrete oils to stick their body to the web. The hairs on the legs of the spiders are sensitive to vibrations and smells. Each leg consists of six joints. Therefore, spiders have 48 knees. A spider web is shown in figure 2. 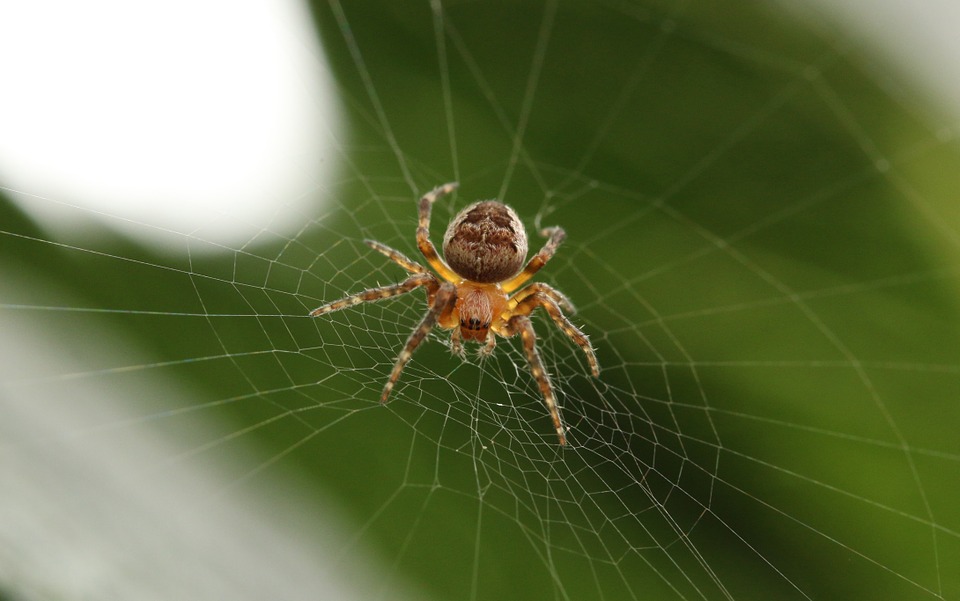 Spiders undergo incomplete metamorphosis. The three stages of the life cycle of a spider are egg, larva/nymph, and adult. Spiders feed only on liquid food. Therefore, they have a tinny gut. Most spiders are predators who inject venom into the prey to kill it. However, there are herbivorous spiders as well.

Insects are a small type of invertebrate animals who are well adapted to their environment. They are relatively small in size. Around six to ten million insect species can be found in the world. Most insects live in terrestrial environments. The body of insects consists of three segments: head, thorax, and abdomen. The head consists of a pair of compound eyes and a pair of antennae. Typically, two pairs of wings are connected to the thorax. Three pairs of legs are connected to the thorax. The body is covered with an exoskeleton, which is made up of chitin. An insect is shown in figure 3.

Insects undergo complete metamorphosis. The four stages of the life cycle are egg, larva/nymph, pupa, and adult. The three types of feeding mechanisms of insects are chewing, sucking, and sponging. Chewing insects have mouthparts such as mandibles, maxilla, and labium. Sucking insects are called true bugs. Sponging insects secrete saliva on the solid food, and the solution is drawn up by the mouth.

Similarities Between Spiders and Insects

Difference Between Spiders and Insects

Insects: Insects are small arthropods who possess six legs and one or two pairs of wings.

Spiders: Spiders belong to the class Arachnida under the phylum Arthropoda.

Insects: Insects belong to the class Insecta under the phylum Arthropoda.

Insects: Insects are mostly terrestrial. Some insects can be aquatic and parasitic.

Division of the Body

Spiders: The body of spiders is divided into cephalothorax and abdomen.

Insects: The body of insects is divided into head, thorax, and abdomen.

Spiders: Spiders do not have wings.

Insects: Many insects have wings.

Spiders: Spiders sense through their cuticles.

Insects: Insects have one pair of antenna.

Spiders: Spiders have one to six pairs of simple eyes.

Insects: Respiration of insects occurs through the trachea.

Insects: Insects feed on both plant and animal materials.

Spiders and insects are two types of arthropods, containing jointed appendages. The body of spiders is divided into two segments: cephalothorax and abdomen. However, the body of insects is divided into three segments: head, thorax, and abdomen. Spiders have eight legs while insects have six legs. Insects also have wings. Most of the spiders are predators. Insects may feed on both plant and animal materials. Hence, the main difference between spiders and insects is the anatomical structure of the body and diet.