The main difference between glycine and glycerine is that glycine is an amino acid with a single hydrogen atom as the side chain whereas glycerine is a simple triol.

Glycine and glycerine are two substances with simple chemical structures. Glycine is the simplest stable amino acid while glycerine is a colorless, odorless, and viscous liquid. 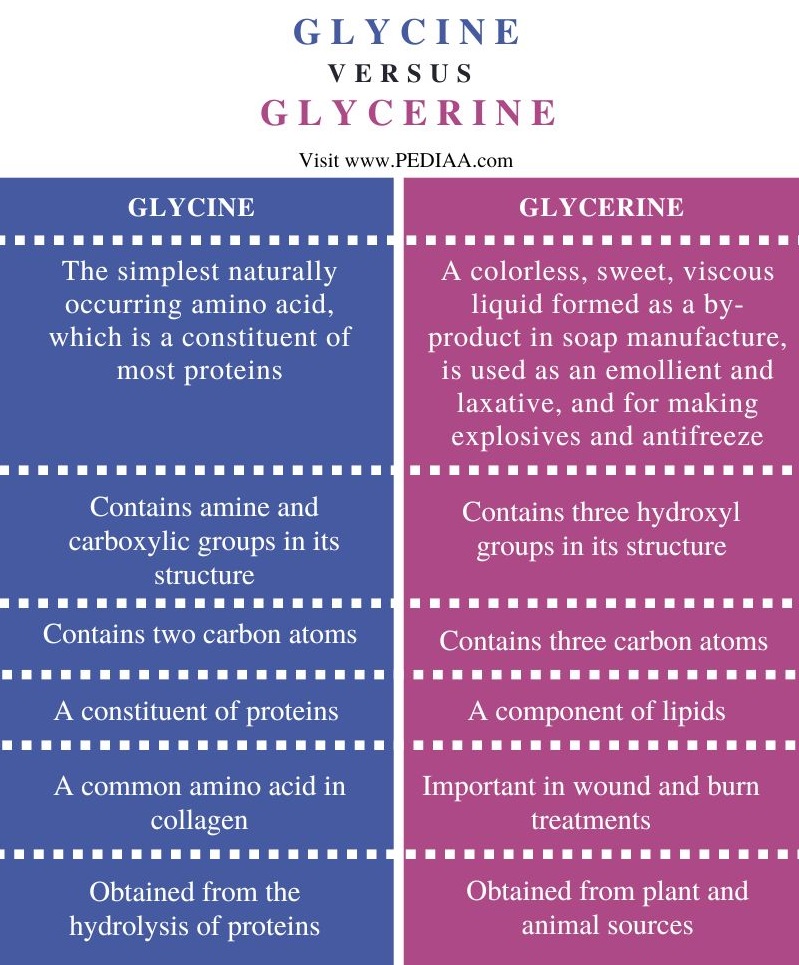 Glycine is an amino acid with a single hydrogen atom as the side chain. It is also the simplest stable amino acid. The chemical formula of glycine is NH2‐CH2‐COOH. Glycine is a proteogenic amino acid, which incorporates into the protein during protein biosynthesis. In the secondary protein structure, glycine plays a key role in the formation of alpha helices due to the compact nature of the amino acid. Glycine is abundant in collagen triple helices. 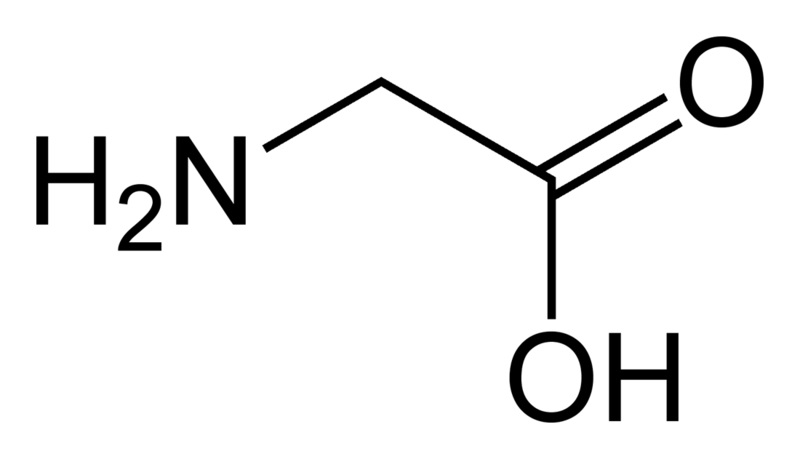 Furthermore, glycine is the only achiral proteogenic amino acid. It can be in both hydrophilic and hydrophobic environments due to the minimal sidechain. Generally, the main source of glycine in the body is hydrolyzed proteins. However, it is not essential to be in the diet because it can be biosynthesized in the body from the amino acid, serine. In addition, glycine is an inhibitory neurotransmitter, which releases within the spinal cord. It prevents uninhibited muscle contractions, preventing spastic paralysis.

Glycerine or glycerol is a simple triol whose backbone is in lipids. It is a colorless, odorless, viscous liquid that is sweet-tasting and non-toxic. Glycerine is also obtained from plant and animal sources. In general, glycerine occurs in triglycerides and glycerol esters. Glycerine serves as a sweetener in the food industry. Glycerin also has antimicrobial and antiviral properties. Therefore, it is important as a preservative in the food industry. In low-fat foods, glycerine is added as a filler. In liqueurs, glycerine is a thickening agent. Glycerine and water are also used for the preservation of plant leaves.

Glycerine is important in the wound and burns treatments due to its antimicrobial properties. In addition, it has bactericidal properties. Usually, glycerine cause reduced inflammation after 2 hours of treatment. Because of its three hydroxyl groups, glycerol is miscible with water and is hygroscopic in nature.

Similarities Between Glycine and Glycerine

Difference Between Glycine and Glycerine

Glycine refers to the simplest naturally occurring amino acid, which is a constituent of most proteins, while glycerine refers to a colorless, sweet, viscous liquid formed as a by-product in soap manufacture, is used as an emollient and laxative, and for making explosives and antifreeze.

Glycine is a constituent of proteins while glycerine is a component of lipids.

Glycine is a common amino acid in collagen while glycerine is important in the wound and burn treatments.