In other words, both Hercules and Heracles are names for a famous hero found in Greek and Roman mythology. Hercules is the most well-known of these two names. He is often portrayed as a muscular figure, wearing a lionskin and carrying a club. There are many legends and stories about the adventures of Hercules.

Hercules is one of the most popular heroes in Greek and Roman mythology. He is known for his strength and for his many heroic adventures. The character of Hercules has many facets, and over the years, different writers and artists have portrayed him in different lights, with contradictory characteristics. Moreover, legends describe him as the son of Zeus (Zeus rules over all the gods and all mortals on earth) and Alcmene, who is the granddaughter of the hero Perseus.

Hercules faced many trials and tribulations from childhood. When he was born, Hera (the wife of Zeus) sent two snakes to kill him in his crib. But baby Hercules was incredibly strong and fearless and strangled the two snakes. One legend also says that Alcmene abandoned baby Hercules in the woods to protect him from the wrath of Hera, and the goddess Minerva who discovered him in the woods, took her to Hera, claiming that he was an orphan who needed nourishment. Hera suckled Hercules at her own breast, and this made him stronger and gave him godly powers. When the baby bit her breast, Hera pushed him away, spilling milk across the night way, and thus creating the Milky Way. 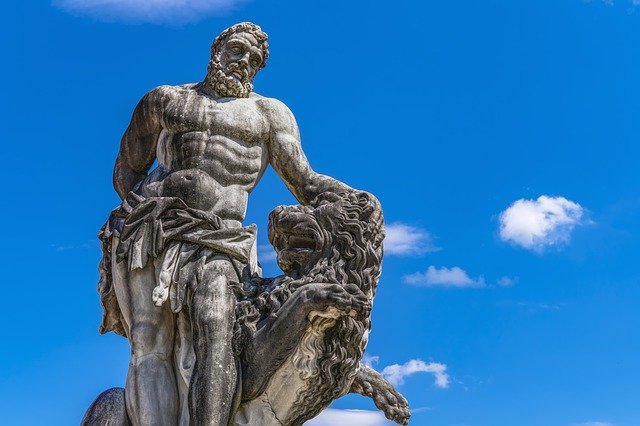 The most popular and valiant adventures of Hercules are known as the twelve labours. According to some legends, Hera cast a spell on Hercules, which made him go temporarily insane and kill his wife and two children. Once he came to his senses, he performed the twelve labors as punishment and repentance for his grave deeds. Hercules performed these twelve heroic labors for the Mycenaen king Eurystheus.

Throughout his life, Hercules also performed other heroic deeds like battling for control of Mount Olympus, rescuing the princess of Troy, and freeing Prometheus. When he died, it is said that he was carried to Olympus on her chariot, and legend says that he spent the rest of eternity with the Olympian gods.

Heracles is the Greek name of Hercules. Therefore, both refer to the same mythological hero.

Difference Between Hercules and Heracles

There is no real difference between Hercules and Heracles. Both refer to the famous hero in Greek and Roman mythology. Heracles is a Greek name, while Hercules is a Roman name.

In conclusion, the only difference between Hercules and Heracles is the origins of these names. Heracles is a Greek name while Hercules is a Roman name. Moreover, Hercules or Heracles is one of the most popular heroes in Greek and Roman mythology.