The main difference between holly and mistletoe is that holly is either evergreen or deciduous tree, shrub or climber from tropics to temperate zones worldwide whereas mistletoe is an obligate hemiparasitic plant native to Europe. Furthermore, female plants of holly produce a red, berry-like fruit while mistletoe produces small, white berries.

Holly and mistletoe are two types of plants used for a lot of Christmas and holiday decorations.

Holly is an evergreen or deciduous tree, shrub or climber from tropics to temperate zones worldwide. It is a flowering plant belonging to the family Aquifoliaceae. The only genus of this family is Ilex and it contains around 480 species. Generally, all of these species grow from sea level to more than 2,000 meters while some of them are high mountain species. They grow slowly and some of them can grow up to 25 m in height. 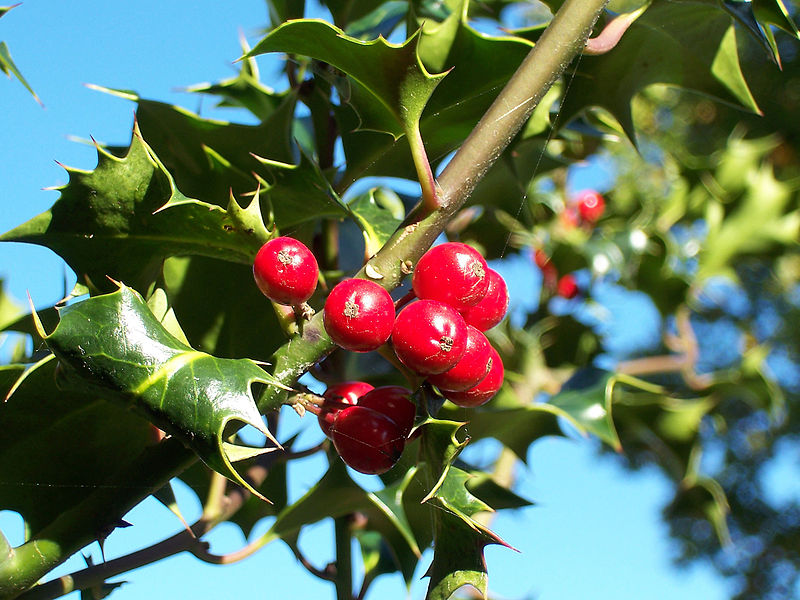 Moreover, holly contains smooth, glabrous, or pubescent branchlets with dark green color leaves, which are simple, alternate glossy, frequently with a spiny leaf margin. Also, the inconspicuous flower of holly is greenish white, with four petals. Usually, holly is a unisexual plant in which male and female flowers occur in different plants. Although the small, red color fruit of holly is considered as a berry, technically it is a drupe. A single bone can contain up to ten fruits. In winter, these fruits ripen, producing a vivid color contrast between the bright red of the fruits and the glossy green evergreen leaves. American holly (Ilex opaca), English holly (Ilex aquifolium), winterberry (Ilex verticillata), and Meserve hybrid hollies (Ilex x meserveae) are some varieties of holly.

Mistletoe is an obligate, hemiparasitic plant that belongs to the order Santalales. It grows parasitic on the crowns of oaks, apple trees, and other trees. Also, it attaches to the host through the production of haustoria, which help to absorb both water and nutrients through it. However, the term mistletoe originally refers to the species Viscum album (European mistletoe), the only species native to the British Isles and much of Europe. Additionally, Phoradendron leucarpum is a species of mistletoe in the Viscaceae family which is native to the United States and Mexico. Moreover, Viscum cruciatum grows in Southwest Spain and Southern Portugal, as well as Morocco (North Africa) and southern Africa. 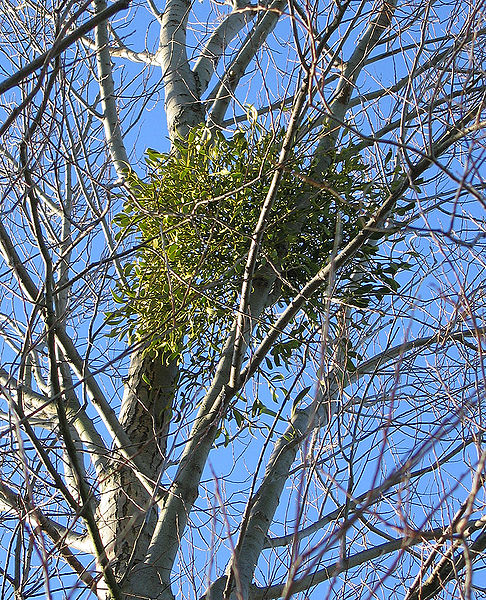 Furthermore, European mistletoe develops smooth-edged, oval, evergreen leaves borne in pairs along the green, fleshy stem. Also, its fruit is white in color and waxy. Two to six fruits occur in a cluster. Birds love to feed on these fruits and the propagation occurs through the seeds stuck on their feet.

Similarities Between Holly and Mistletoe

Difference Between Holly and Mistletoe

Holly refers to a widely distributed evergreen shrub, typically having prickly dark green leaves, small white flowers, and red berries while mistletoe refers to a leathery-leaved parasitic plant which grows on apple, oak, and other broadleaf trees and bears white glutinous berries in winter. Thus, this explains the main difference between holly and mistletoe.

It is said that the leaves of holly represent the crown of thorns worn by Christ at His Passion and the red berries are drops blood from the crown piercing his skin. There is an old custom brought from Germany by the early settlers to steal a kiss under the mistletoe.

Holly grows as a shrub or small tree, and has its own roots in the ground; in contrast, mistletoe grows as a partial parasite on trees, penetrating sucker roots into a tree branch. Hence, this is also a difference between holly and mistletoe.

The leaves of holly are thick and glossy, having wavy and very spiny edges, while the leaves of mistletoe are small, flat or slightly twisted, and spoon-shaped, with smooth edges.

Another difference between holly and mistletoe is their branches. Holly has usually brownish branches covered by the spiny leaves while mistletoe has green branches, which can be easily seen between leaves.

Holly is a shrub or tree with dark green color spiny leaves. Moreover, it produces red colored berries. In contrast, mistletoe is a parasitic plant grown in the crowns of oaks, apple trees, and other trees. It contains olive-green color leaves and produces white color berries. Both holly and mistletoe are native to Europe and America. Furthermore, both are used in Christmas and holiday decorations. However, the main difference between holly and mistletoe is their behavior and morphology.