The main difference between IDE and compiler is that the IDE is a software suite that consists of tools required to develop and test software applications while the compiler is a program that translates the source code written in a high-level programming language into a low-level machine code.

An IDE provides an environment to create, build and test a software application. It consists of a code editor, compiler or interpreter, and a debugger with a Graphical User Interface (GUI). Also, it has features such as source code formatting, error diagnostics, and intelligent code completion, reporting. On the other hand, a compiler is a special program that converts the source code to executable machine code. The programmer can run the appropriate language compiler according to the programming language used to write the source code. 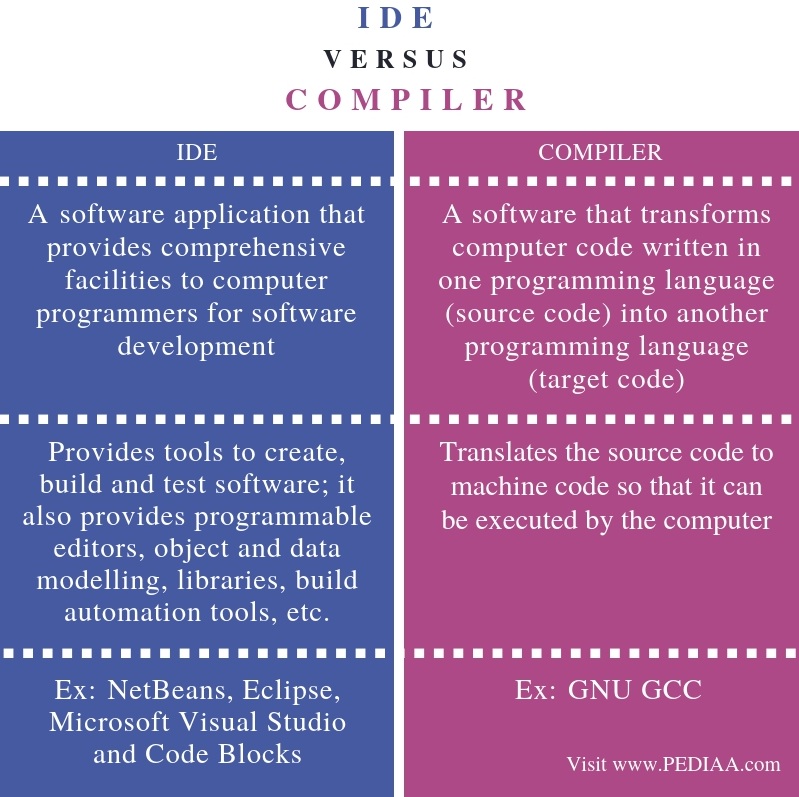 IDE stands for Integrated Development Environment. It is a software application that provides facilities for developing software. It consists of tools such as source code editor, automation tools, and debugger. Most IDEs have compilers and interpreters. Therefore, it is easier to write the code and compile it. Some IDEs support various languages. For example, in Microsoft Visual Studio IDE, the developer can write programs in languages such as C#, C++, Visual Basic, and JavaScript. 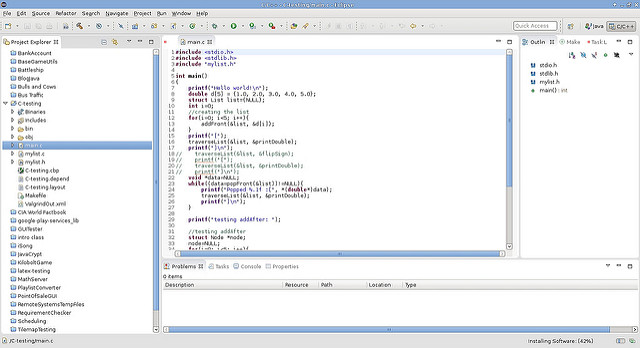 Furthermore, most IDEs have intelligent code completion. When the programmer types the code, the IDE provides the list of matching options or commands. Therefore, the programmer can easily select the required command from that. Also, the GUI makes it easier to organize the code. Overall, an IDE provides all the necessary tools in a single environment to make the development process easier.

What is a Compiler

Computer programs are written using high-level programming languages. These programs or source codes are easily understood by the programmer, but not by the computer. Therefore, the source code is converted into machine-understandable machine code.  A compiler is used for this conversion. Thus, a compiler is a translator that converts the source code from high-level programming language to a lower level machine language in order to create an executable program. 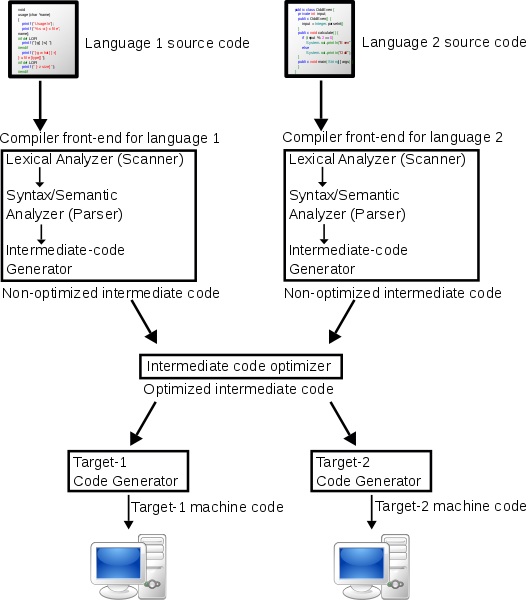 A compiler performs a number of operations such as preprocessing, lexical analysis, parsing, semantic analysis, converting the input programs into an intermediate representation, code optimization and code generation. Moreover, a compiler converts the whole source code into machine code at once. Therefore, the compiler based programming languages such as C and C++ executes faster than other languages.

Relationship Between IDE and Compiler

Difference Between IDE and Compiler

IDE provides tools to create, build and test software. It also provides programmable editors, object and data modelling, libraries, build automation tools and many more. On the other hand, a compiler translates the source code to machine code so that it can be executed by the computer. This is another difference between IDE and compiler.

NetBeans, Eclipse, Microsoft Visual Studio and Code Blocks are some examples for IDEs. GNU GCC is an example for a compiler.

The basic difference between IDE and compiler is that the IDE is a software suite that consists of tools required to develop and test software applications while a compiler is a program that translates the source code written in high-level programming language into low-level machine code. In brief, an IDE helps to improve the productivity of the software development process whereas a compiler works as the translator to convert a computer program.