The main difference between imidazole and triazole is that imidazole is a heterocyclic organic compound containing two nitrogen atoms separated by a carbon atom in a five-membered ring, called 1,3-diazole whereas triazole is either of two isomeric heterocyclic compounds having a five-membered ring with three nitrogen atoms and two double bonds in the ring.

In general, imidazole and triazole are two analogous organic compounds with a heterocyclic ring structure. Both have carbon and nitrogen bonds in the ring structure. In the pharmaceutical industry, both compounds are important as antifungal drugs. 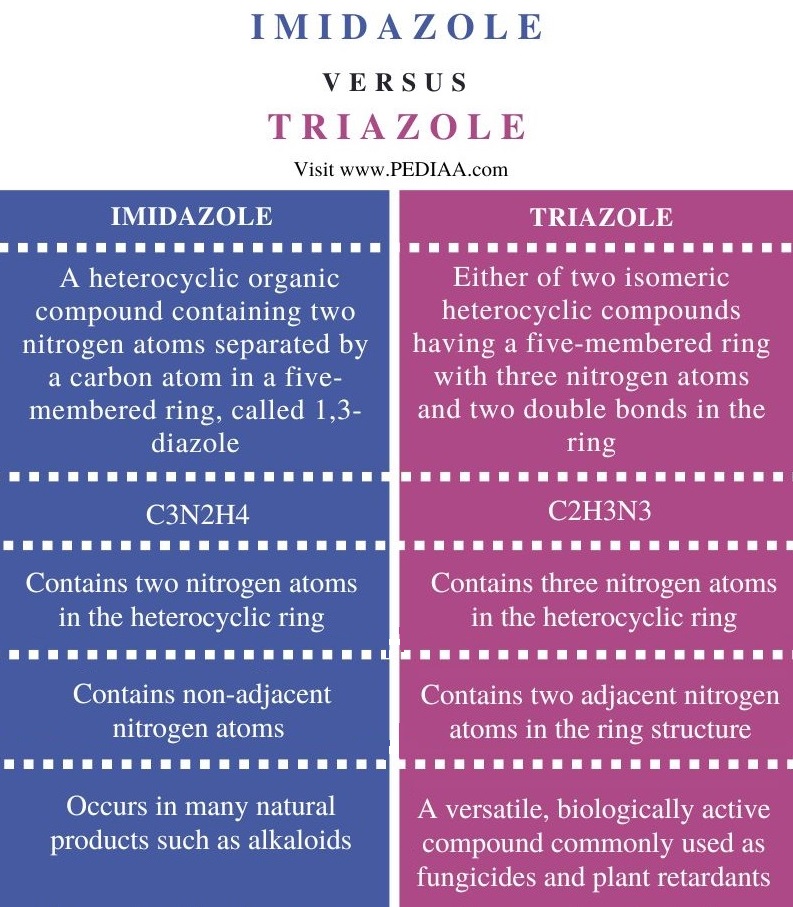 Imidazole is an organic compound with the formula C3N2H4. It is a white or colorless solid, soluble in water, producing a mildly alkaline solution. In chemistry, imidazole is an aromatic heterocycle, classified as a diazole, and has non-adjacent nitrogen atoms in meta-substitution. 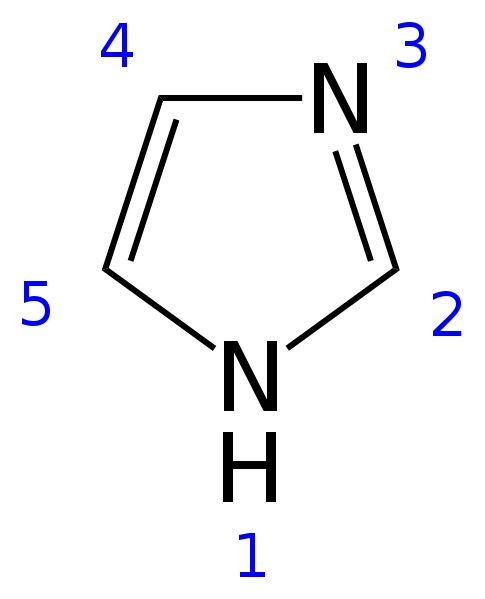 Furthermore, many natural products such as alkaloids, contain an imidazole ring. Usually, imidazoles share the 1,3-C3N2 ring but feature varied substituents. More importantly, this ring system is present in important biological building blocks, such as histidine and the related hormone histamine. Many drugs contain an imidazole ring, such as certain antifungal drugs, the nitroimidazole series of antibiotics, and the sedative midazolam.

What is a Triazole

Triazole is a heterocyclic compound with the molecular formula C2H3N3, featuring a five-membered ring of two carbon atoms and three nitrogen atoms. The main feature of triazoles is their substantial isomerism, depending on the positioning of the nitrogen atoms within the ring. 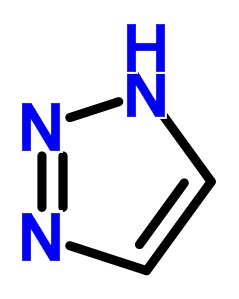 Moreover, many triazoles are versatile, biologically active compounds. They are commonly used as fungicides and plant retardants. Triazoles’ ability to react as azides is important in bioorthogonal chemistry because of the large number of nitrogen atoms in them. Lastly, the many free lone pairs in triazoles make them useful as coordination compounds, although not typically as haptic ligands.

Similarities Between Imidazole and Triazole

Difference Between Imidazole and Triazole

Moreover, the imidazole ring occurs in many natural products such as alkaloids while triazole is a versatile, biologically active compound commonly used as fungicides and plant retardants.