Sonnets are a special type of poem that has been popular in English and Italian literature for centuries. The word “sonnet” itself comes from the Italian word “sonetto.” Moreover, there are two main types of sonnets as Petrarchan sonnets and Shakespearean sonnets. They are also known as Italian sonnets and English sonnets, respectively. 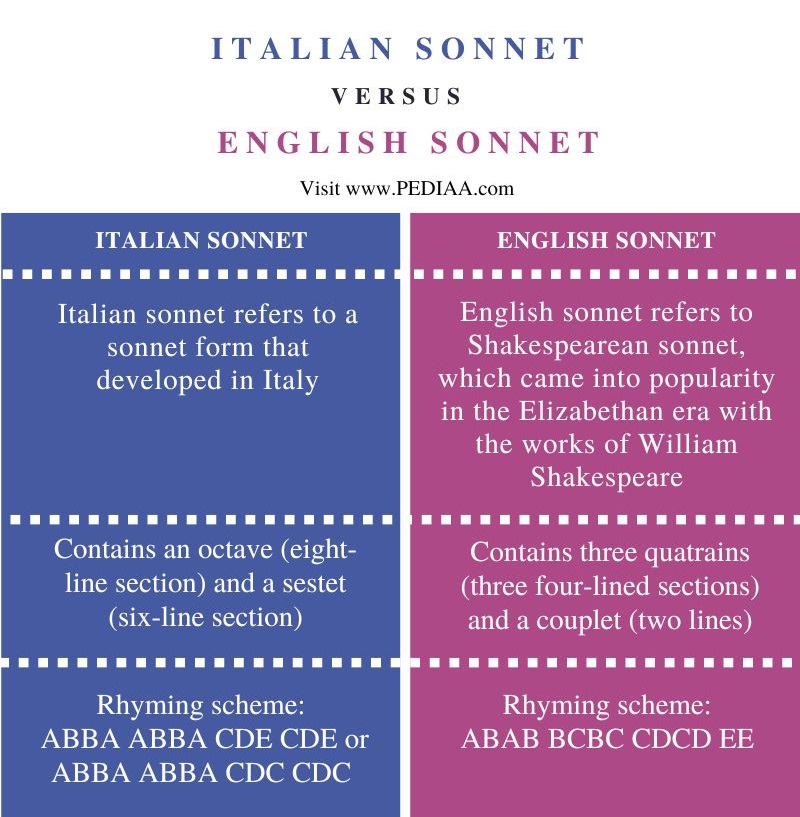 What is an Italian Sonnet

The origins of sonnets can be traced back to the Italian Renaissance, hence the name Italian sonnet. Also, the most known form of Italian sonnets is Petrarchan sonnets, named after the fourteenth-century Italian lyrical poet Francesco Petrarch. However, Petrarch is not the creator of sonnets, but his sonnet form became so popular that many poets, including William Wordsworth, Sir Thomas Wyatt, and Elizabeth Browning, used this sonnet form.

An Italian sonnet contains 14 lines of poetry. Also, they are divided into an octave (eight-line section) and a sestet (six-line section). The octave follows an ABBA ABBA rhythm, i.e., the first, fourth, fifth, and eighth lines rhyme with one another, while the second, third, sixth, and seventh rhyme with one another. Whereas, the sestet can have sestet: CDE CDE and CDC CDC. However, the former is more common in Petrarchan sonnets.

With conquering limbs astride from land to land;

Here at our sea-washed, sunset gates shall stand

A mighty woman with a torch, whose flame

Is the imprisoned lightning, and her name

Mother of Exiles. From her beacon-hand

With silent lips. “Give me your tired, your poor,

The wretched refuse of your teeming shore.

Send these, the homeless, tempest-tost to me,

I lift my lamp beside the golden door!”

You can observe these features in the following Italian sonnet: “The New Colossus” by Emma Lazarus

What is an English Sonnet

An English sonnet, also known as a Shakesperean sonnet or Elizabethan sonnet is a sonnet that came into popularity in the Elizabethan era with the works of William Shakespeare. In fact, he was the most famous sonneteer of the Elizabethan period. 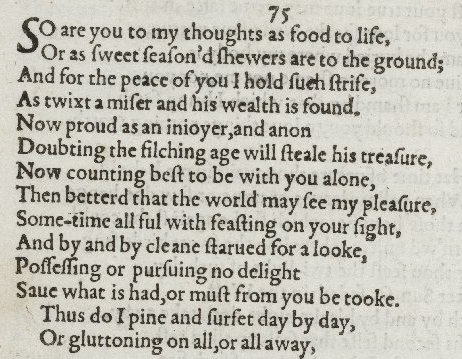 Shall I compare thee to a summer’s day?

Rough winds do shake the darling buds of May,

And summer’s lease hath all too short a date;

Sometime too hot the eye of heaven shines,

And often is his gold complexion dimm’d;

And every fair from fair sometime declines,

But thy eternal summer shall not fade,

Nor lose possession of that fair thou ow’st;

Nor shall death brag thou wander’st in his shade,

When in eternal lines to time thou grow’st:

So long as men can breathe or eyes can see,

So long lives this, and this gives life to thee.