The main difference between limit test and assay is that limit test allows the identification and control of small quantities of impurities present in a substance whereas an assay mainly allows the identification and determination of the key component of a sample. Furthermore, limiting tests are responsible for the quantification of impurities in a sample compared to a standard. In contrast, an assay both qualify and quantify the key component of the sample.

Limit test and assay are two methods involved in the determination of components in a sample. They are important analytical procedures in drug development. 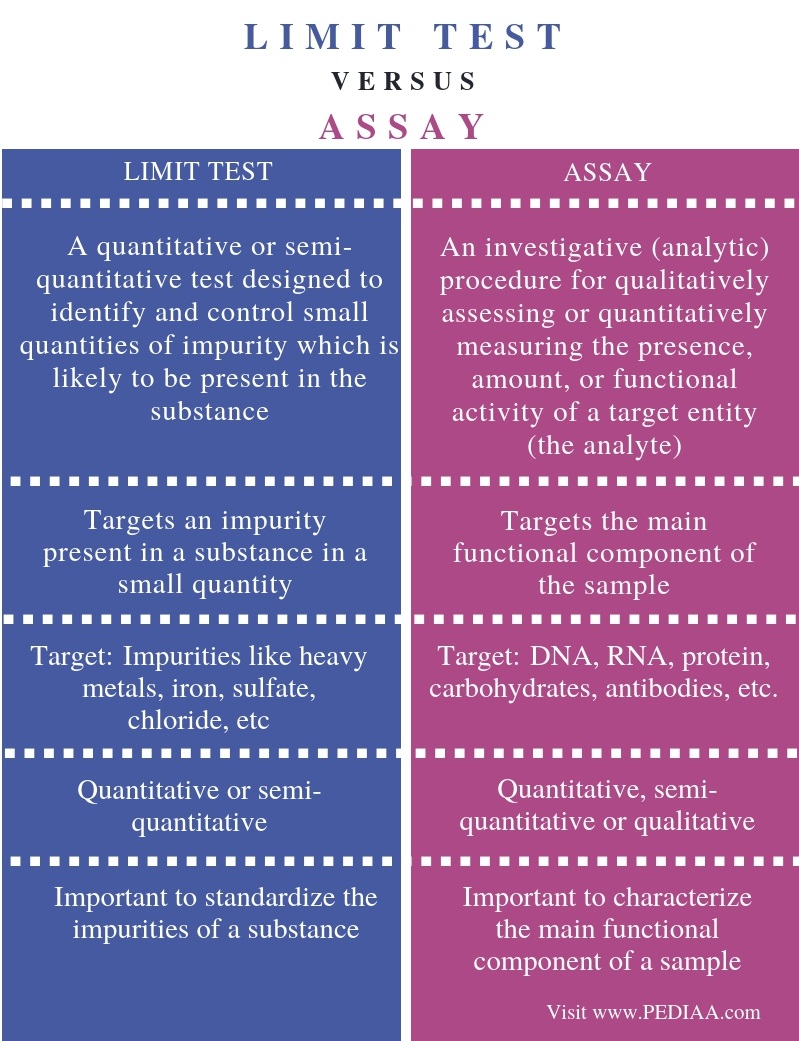 What is a Limit Test

What is an Assay

An assay is an analytic procedure used to characterize the main functional component of a sample. Therefore, it is can be a quantitative and/or qualitative test. Though the original application is to determine the metal purity, assays are widely used in other areas as well, which include laboratory medicine, pharmacology, environmental biology, immunology, molecular biology, and biochemistry. 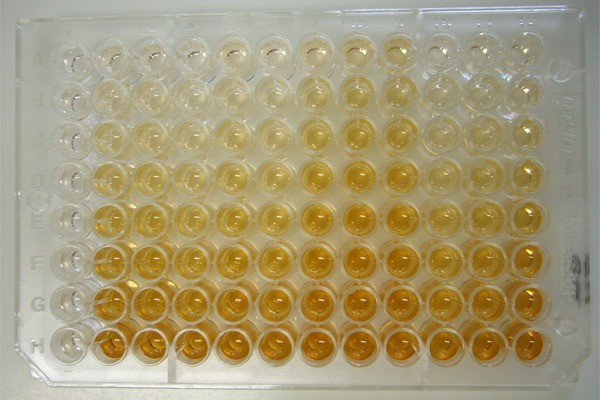 Figure 1: Results of an Immunoassay

The measuring entity of an assay is known as the analyte or the target of the assay. It can either a drug, biochemical substance or even a cell of a living organism. Generally, in an assay, all exogenous reactants or reagents, as well as the experimental conditions, are kept constant while only the target of the assay varies either in quantity or quality. Some examples of assays used to analyze proteins as the target are Lowry protein assay, Bradford assay, BCA assay, etc.

Similarities Between Limit Test and Assay

Difference Between Limit Test and Assay

A limit test refers to a quantitative or semi-quantitative test designed to identify and control small quantities of impurity which is likely to be present in a substance while an assay refers to an investigative (analytic) procedure for qualitatively assessing or quantitatively measuring the presence, amount, or functional activity of a target entity (the analyte). Thus, this is the main difference between limit test and assay.

Target component is also a major difference between limiting test and assay. Generally, limit test targets an impurity present in a substance in a small quantity while an assay targets the main functional component of the sample.

A limit test is a type of quantitative testing procedure used to identify the quantity of an impurity in a substance. In comparison, an assay is both quantitative and qualitative testing procedure responsible for the characterization of the main functional component of a sample. Both limiting tests and assays are important in various analytical procedures including drug development. However, the main difference between limit test and assay is the target compound and the type of test.

1. “ELISA” By BiotechMichael – Own work (Public Domain) via Commons Wikimedia