Fredrick Nietzsche (Friedrich Wilhelm Nietzsche 1844-1900) was a German philosopher and a scholar who was a significant figure in the field of Ethics and Western philosophy. He worked as the Chair of Classical Philology at the University of Basel. According to his works, especially in the book ‘Geneaologie der Moral’ (On the Genealogy of Morality) written in 1887, there are two types of morality as master morality and slave morality; the good and evil in the world are viewed accordingly. This concept influenced the development of Western philosophy greatly. 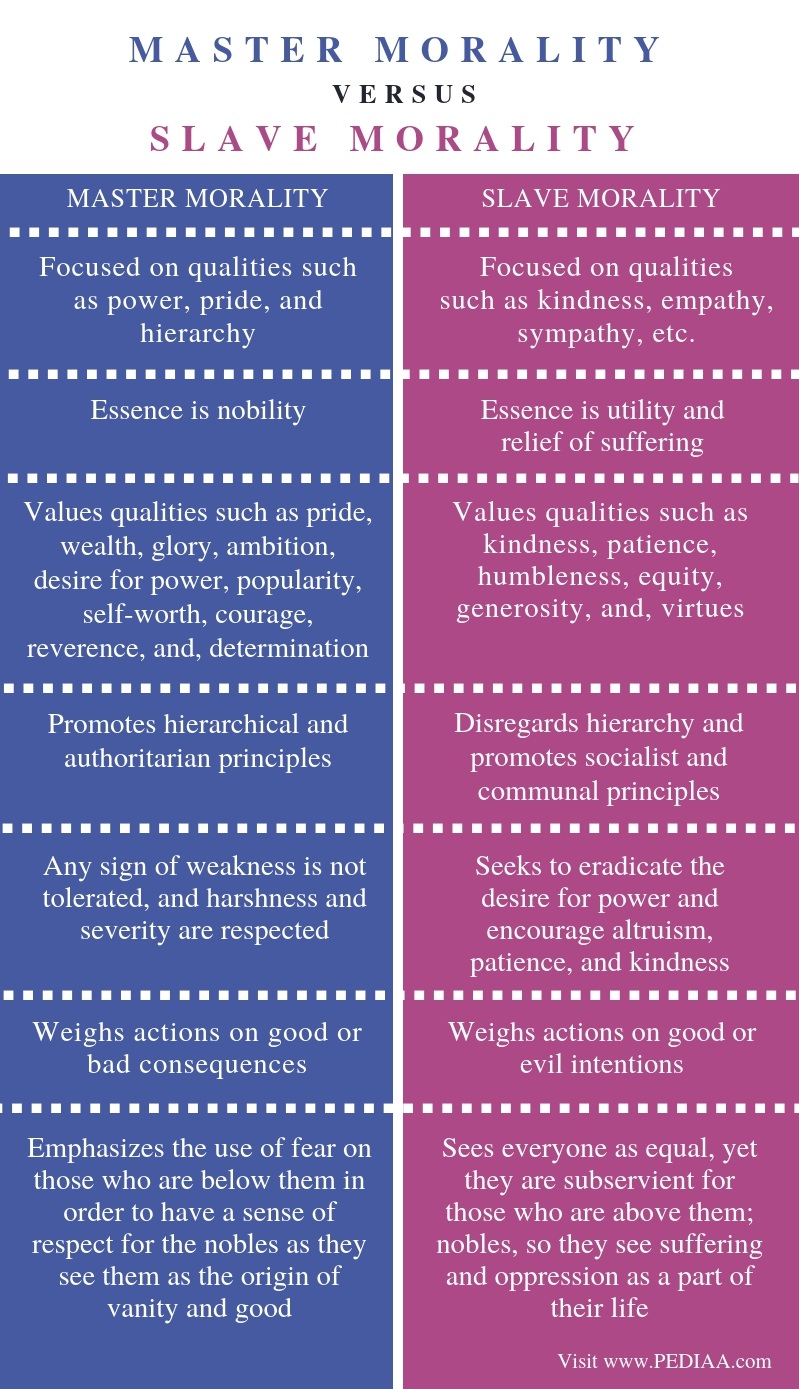 What is Master Morality

Nietzsche describes that master morality goes with noble and strong-willed people. Thus, the master morality concept emphasizes qualities such as pride, power and courage, openness, and, self-worth. According to master morality, the consequences of the actions define the good and bad.

Consequently, people with master morality see themselves as people with high self-worth having a sense of ‘fullness’ from power, wealth, abilities and talents, and from that, they will try to help those who are below them. Consequently, this creates a sense of hierarchy in them and they start pitying those who are below them and only help them out of that attitude. Thus, master morality can be defined morality associated with pride and strong-willed people 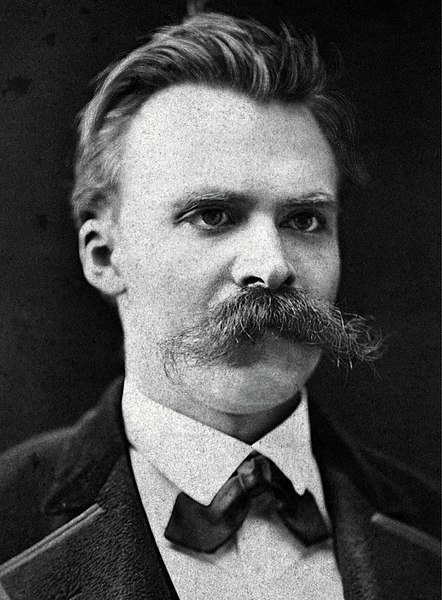 More importantly, the essence of master morality is nobility. Also, other qualities that we often value in master morality are open-mindedness, courage, truthfulness, trust, and an accurate sense of one’s self-worth. Master morality begins in the “noble man”, with a spontaneous idea of the good; then the idea of bad develops as what is not good. Hence, a noble person sees himself as the origin of value and good; therefore he should evoke fear on those who are below him and should have respect for those who are equal to him (such as family and friends). 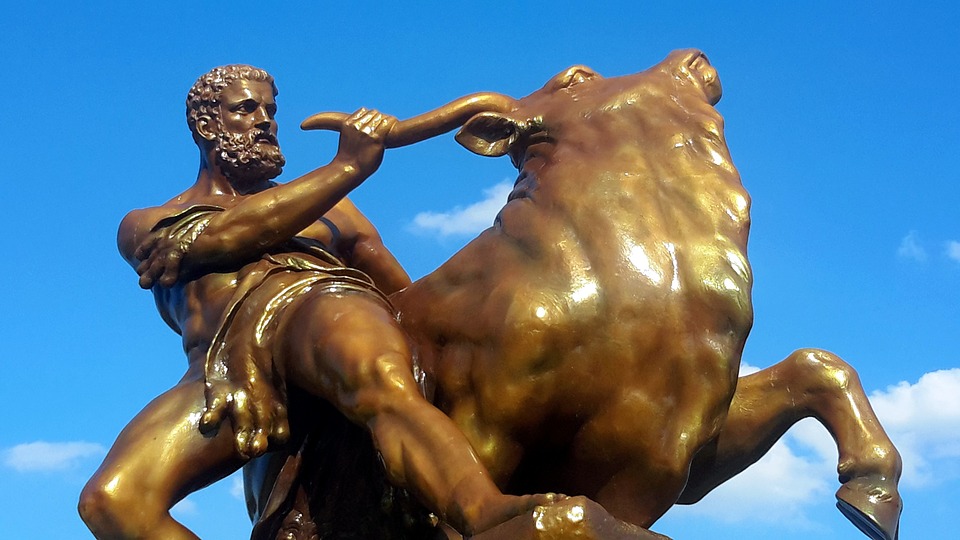 Nietzsche valued master morality over slave morality. Moreover, this morality spans back to the Greek times where Greek heroes view themselves as the epitome of physical and mental strength. They are strong, glorious characters who make their will into reality no matter the consequences. It is well stated by the famous phrase “the strong do what they will, the weak suffer what they must.” The classical literature such as Odyssey and Illiad exemplify Nietzsche’s master morality.

What is Slave Morality 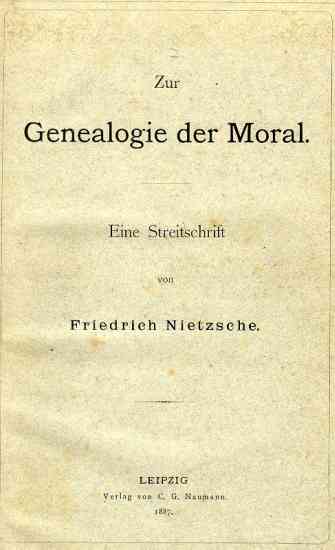 According to Nietzsche, slave morality is not ambitious to exert one’s will by the strength and prefers to be subservient rather. It does not seek to exceed the masters but aims to make them slaves as well. The essence of slave morality is, therefore, utility. Slave morality sees nobility as evil and as the creator of suffering. Therefore, pity, altruism, and a lack of interest in oneself are good. It also encourages humility and patience.

Moreover, it questions the apparent happiness of the noble person, rejects hierarchy, and argues that morality is the same for every person. It also sees the human condition as suffering and oppressed by the desire for power; consequently, slave morality sees people as helpless and suffering. 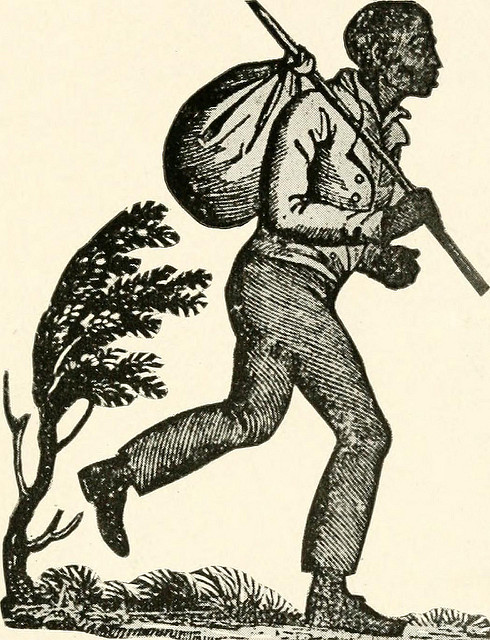 Nietzsche believed that the purest existing form of the slave morality is in Christ’s teachings and explained that the Beatitudes best expressed the morality’s core ideas.

Relationship Between Master and Slave Morality

Difference Between Master and Slave Morality

Sense of Fear and Respect

Furthermore, master morality emphasizes the use of fear on those who are below them in order to have a sense of respect for the nobles as they see them as the origin of vanity and good. On the other hand, slave morality sees everyone as equal, yet they are subservient for those who are above them; nobles, so they see suffering and oppression as a part of their life.

1. “Nietzsche187a” By Friedrich Hartmann – (Public Domain) via Commons Wikimedia
2. “1374830” (CC0) via Max Pixel
3. “Genealogie der Moral cover” By C. G. Naumann, publisher – Deutsche Historische Museum, LeMO, (Public Domain) via Commons Wikimedia
4. “Image from page 78 of “History of the Underground railroad as it was conducted by the Anti-slavery league; including many thrilling encounters between those aiding the slaves to escape and those trying to recapture them” (1915)” By Internet Archive Book Images (No known copyright restrictions) via Flickr