There are various algorithms used to protect the messages in communication. Two of them are MD5 and SHA. Herein, the MD5 is considered as cryptographically broken and cause collisions. On the other hand, SHA refers to a family of cryptographic hash functions developed by the National Institute of Standards and Technology (NIST). Overall, SHA has versions such as SHA 256 and SHA 512, which are more secure than MD5. 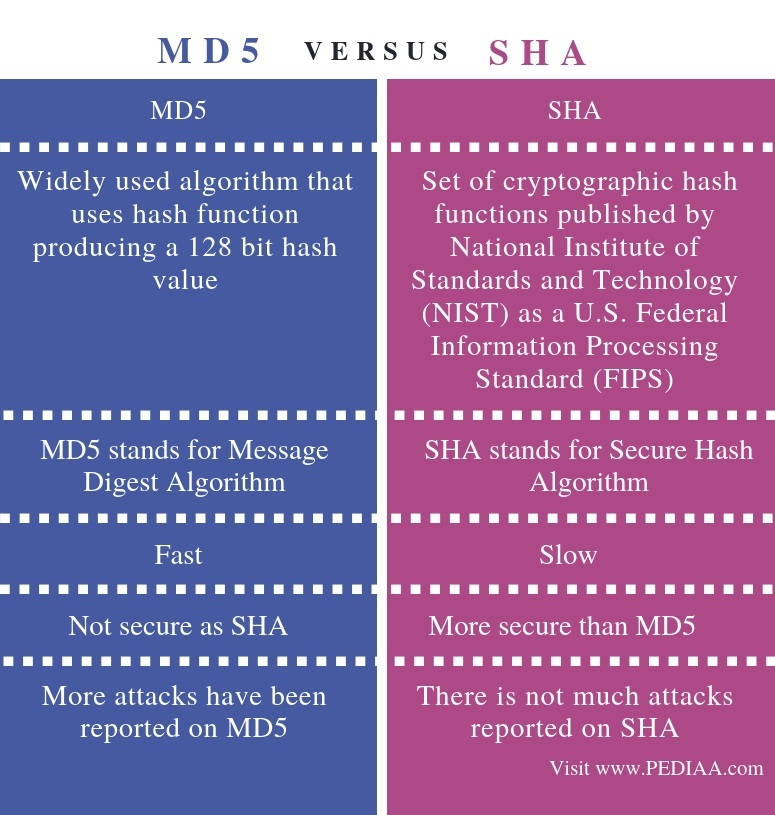 MD5 stands for Message-Digest Algorithm. It is capable of producing a 128-bit hash value. The initial motivation for designing this algorithm was to use is as a cryptographic hash function. However, it caused much vulnerability. But, it is possible to use it as a checksum to verify data integrity. Moreover, it is suitable for non-cryptographic tasks such as finding the partition for a specific key in a partitioned database. Generally, a cryptographic hash function has to be capable of finding two separate messages that hash to the same value. MD5 fails in achieving this requirement. Furthermore, file servers provide previously computed MD5 checksum for the files. Also, it allows the user to compare the checksum of the downloaded file to it. Considering examples of applications that use MD5, Unix based OS contains MD5 sum utilities in their distribution packages.

SHA stands for Secure Hash Algorithm. National Institute of Standard and Technology published various versions of SHA. Some of them are as follows.

SHA-1: It is a 160-bit hash function. It was designed as a part of the Digital Signature Algorithm. However, after 2010, it was not in use.

SHA-3: Internal structure of SHA-2 is different from the rest of the SHA family. Additionally, it supports the same hash lengths as SHA-2.

Difference Between MD5 and SHA

MD5 is a widely used algorithm that uses a hash function producing a 128-bit hash value. In contrast, SHA is a set of cryptographic hash functions published by the National Institute of Standards and Technology (NIST) as a U.S. Federal Information Processing Standard (FIPS).

An important difference between MD5 and SHA is that the SHA is more secure than MD5.

Also, another difference between MD5 and SHA is that MD5 is faster than SHA.