In brief, mushrooms and toadstools are fruiting bodies that produce spores of the fungi. Generally, many fungi grow underground, and mainly in the autumn months, cup-like structures appear on the ground. 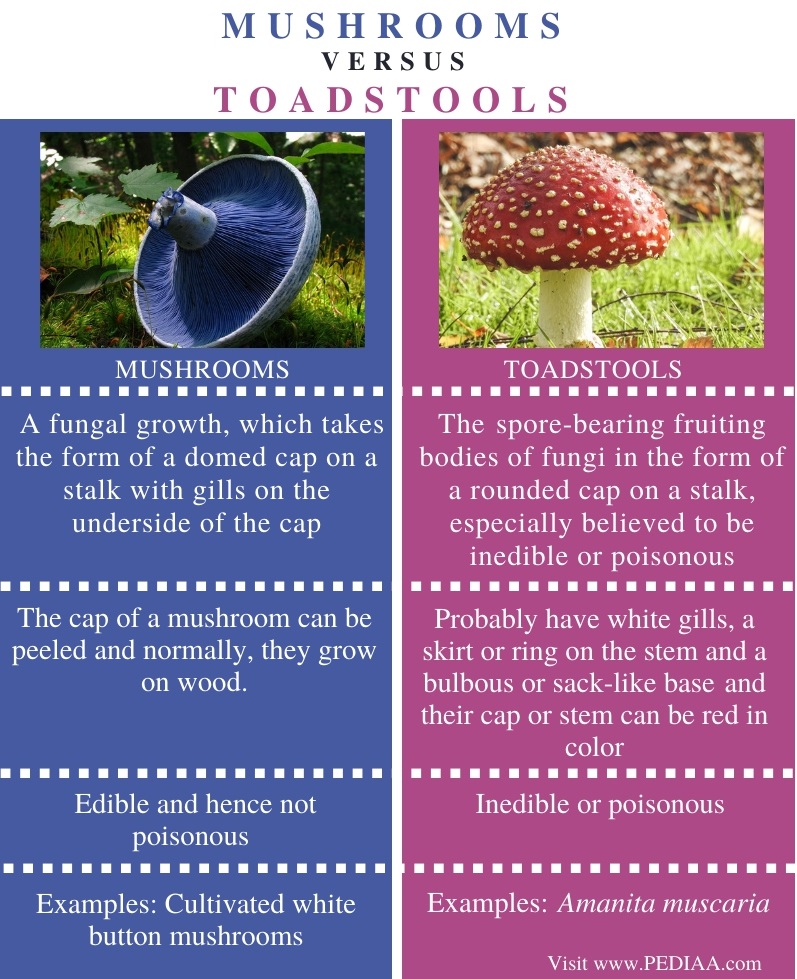 Mushrooms are fleshy, spore-bearing fruiting bodies of a fungus. Generally, they occur on the ground. The two fungi divisions Basidiomycota and Agaricomycetes produce mushrooms with a stem and a cup. The cup contains gills in its underside. Furthermore, mushrooms also refer to the number of gilled fungi without a stem. The second type of mushrooms occurs in the division Ascomycota. Moreover, the gills of mushrooms produce spores, which are microscopic. Spores are reproductive structures capable of spreading the fungus around the ground. 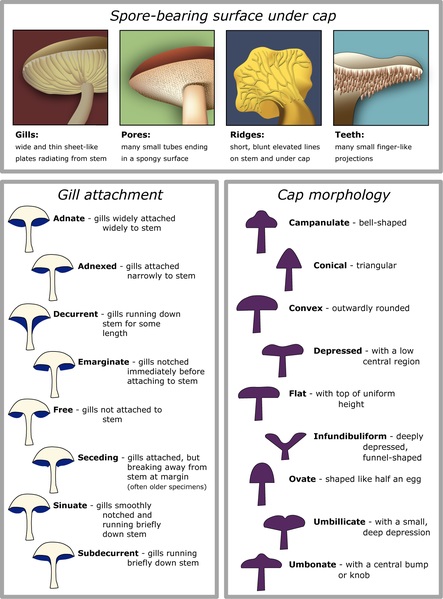 Moreover, different morphologies of mushrooms include  “bolete“, “puffball“, “stinkhorn“, and “morel“, and “agarics“. The standard term ‘mushrooms’ refers to the cultivated white button mushroom, Agaricus bisporus. Thus, typical mushrooms belong to the order Agaricales. Other groups of fungi that produce edible mushrooms are boletes, milk caps, and russulas. In addition to these, some examples of edible mushrooms include the Giant Puffball, Beefsteak Fungus, Porcelain Fungus, Cauliflower Fungus, Dryads Saddle, the Hedgehog Fungus, etc.

Toadstools are a type of mushroom-like fruiting bodies of fungi, producing poisons. Therefore, they are inedible. Generally, these poisons are secondary metabolites that are capable of being toxic, antibiotic, antiviral, mind-altering, or bioluminescent. Although only fewer species are deadly, most poisonous mushrooms can produce severe and unpleasant symptoms. However, toxicity plays a key role in the protection of the fruiting bodies, defending against consumption and premature destruction by animals. Some mushrooms can be poisonous due to their propensity to absorb heavy metals. 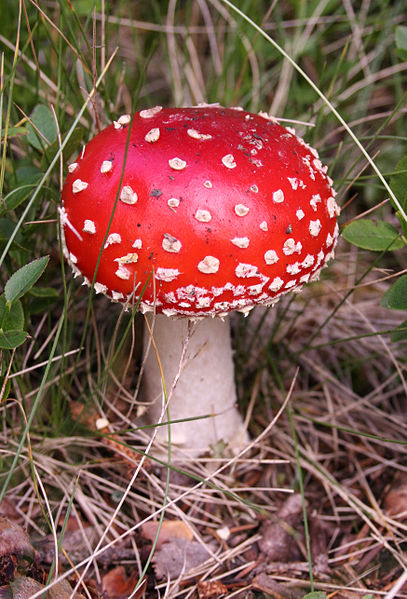 Furthermore, the main poisonous mushrooms are in the Amanita family. All of them contain white gills and spores, growing on the underside of the sack-like or bulbous structures called sups or volva. Some examples of deadly mushrooms include destroying angel and death cap.

Similarities Between Mushrooms and Toadstools

Difference Between Mushrooms and Toadstools

The cap of a mushroom can be peeled and normally, and they grow on wood, while toadstools usually have white gills, a skirt or ring on the stem and a bulbous or sack-like base and their cap or stem can be red in color.

Mushrooms are mainly edible and are not poisonous, while toadstools are inedible or poisonous.

Mushrooms are a type of fungal growth with a form of a domed cap on a stalk. They also contain gills on the underside of the cup, producing spores. Generally, mushrooms are not poisonous. Therefore, they are edible. In comparison, toadstools are a type of mushroom-like growth, which contains poisons. Hence, they are not edible. Thus, the main difference between mushrooms and toadstools is the containment of poisons.