Home » Geography » What is the Difference Between Ocean and Sea

The main difference between ocean and sea is that an ocean is a saltwater body that is larger in size than the sea, another saltwater body. Seas exist between the area where land and ocean meet.

We often use the terms “ocean” and “sea” interchangeably, although there is a clear-cut geographical difference between these two saltwater bodies. Simply put, seas are a part of the larger ocean water bodies and are often partially enclosed by the land. 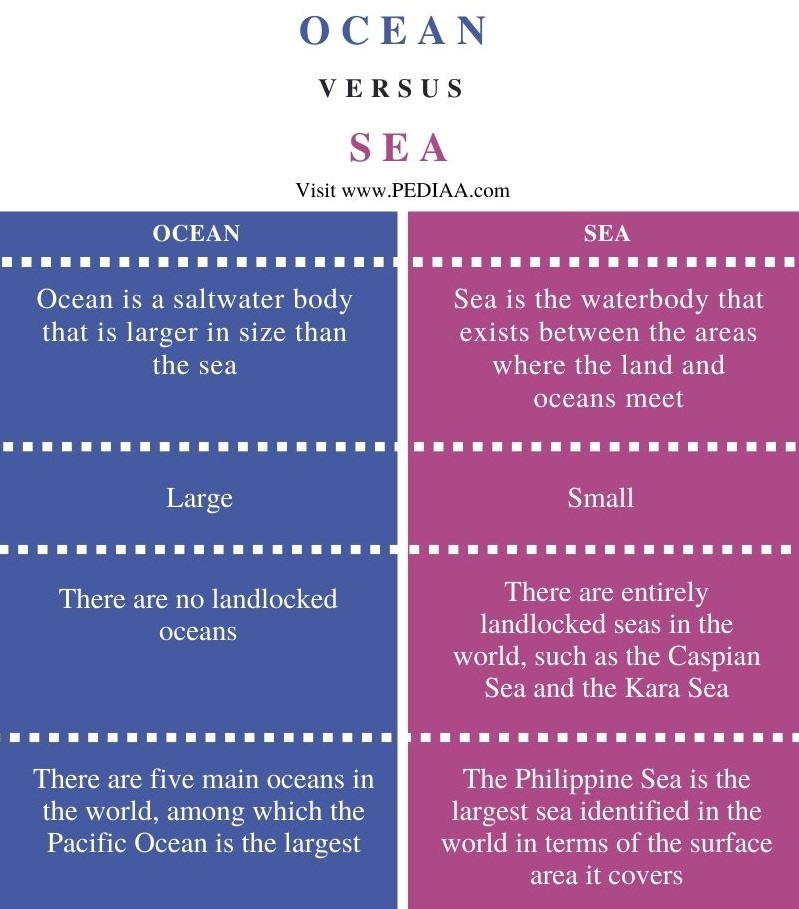 The ocean is the largest saltwater body on Earth. There are five main oceans on Earth: the Pacific Ocean, Indian Ocean, Atlantic Ocean, Antarctic Ocean, and the Arctic Ocean. The Pacific Ocean is identified as the largest ocean on Earth, while the Arctic Ocean is identified as the smallest. Together, these oceans cover almost 70.8% of the Earth’s s surface and include 97% of Earth’s water content.

Oceans are the most important component of Earth’s hydrosphere and play a significant role in the existence of plant and animal life on Earth. Oceans not only function as heat reservoirs but also largely influence Earth’s weather patterns and climate, the water cycle, and the carbon cycle.

Taking different physical and biological conditions into account, oceanographers have divided the ocean into different horizontal and vertical zones. Furthermore, the ocean water column is divided into different other zones focusing on the depth and light availability. For instance, photosynthesis happens in the photic zone that covers water 1% depth from the ocean surface, making the photic zone rich with biodiversity.

Sea is a saltwater body that can be either a part of the greater ocean (e.g., Mediterranean Sea) or a completely landlocked saltwater lake such as the Caspian Sea. We can also describe the sea as the system that interconnects all the Earth’s great oceanic waters: Pacific, Atlantic, Indian,  Arctic, and Southern Oceans. Philippine Sea, Coral Sea, American Mediterranean Sea, Arabian Sea, and the Sargasso Sea are the largest seas on Earth. 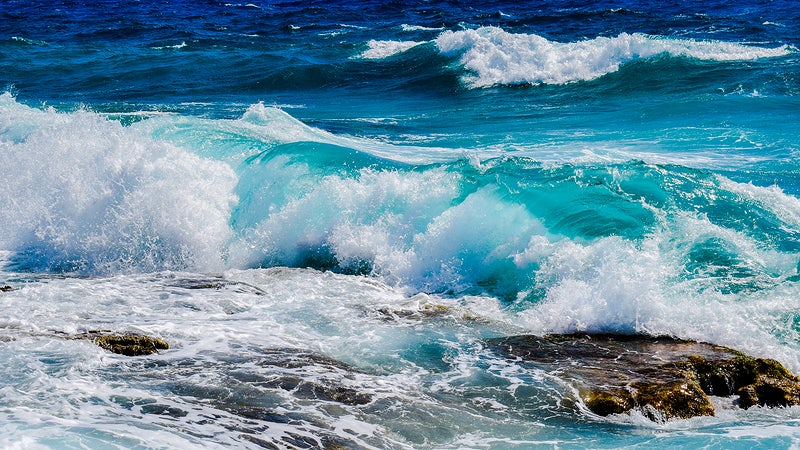 When it comes to the size of these water bodies, seas are smaller in size than oceans. Salinity is common to both ocean and seawater. However, compared to open ocean waters, which have about 35 grams of solids per liter, some landlocked seas, such as the Dead Sea, have a relatively higher salinity level.

Similarities Between Ocean and Sea

Difference Between Ocean and Sea

An ocean is a saltwater body that is larger in size than the sea. Sea is the waterbody that exists between the areas where the land and oceans meet.

Compared to the size of great oceans, seas are usually smaller in size.

There are entirely landlocked seas in the world, such as the Caspian Sea and the Kara Sea. But there are no landlocked oceans.

There are five main oceans in the world, among which the Pacific Ocean is the largest. When it comes to seas, the Philippine Sea is the largest sea identified in the world in terms of the surface area it covers.

The main difference between ocean and sea is their size. The ocean is a larger saltwater body compared to the size of the sea. Furthermore, it is possible for seas to exist either as a part of the open ocean or landlocked and completely cut off from the ocean. However, both oceans and seas are integral for the existence of plant and animal life on Earth