Both pastrami and corned beef were originally ways to preserve meat without refrigeration. They both undergo a process of curing with a similar brine, but they undergo different processes after curing. 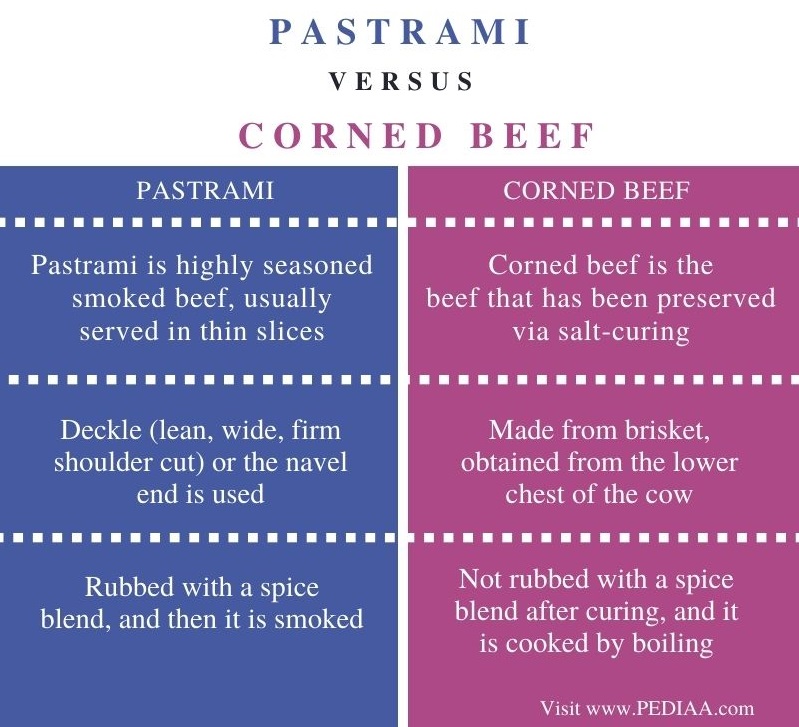 Pastrami is highly seasoned smoked beef, usually served in thin slices. This is a meat product of Romanian origin. Originally, pastrami was a way to preserve meat without refrigeration. Pastrami is a usually made from beef brisket, but sometimes it is made from lamb and turkey as well. Generally, the navel end of the beef (place cut) and the lean, wide, firm shoulder cut (deckle) are the most common cuts we use for pastrami. Pastrami making involves brining the raw meat, rubbing it with salt, sugar, garlic and spices, dry-curing it, smoking and then finally cooking it by boiling or steaming. People mainly serve pastrami in sandwiches. The classic pastrami sandwich contains rye bread, pastrami and spicy brown mustard, and pickles. You may find two types of pastrami as black pastrami and red pastrami. Black pastrami has a darker shade because we rub it with pepper and molasses and fully cook it. Red pastrami, on the other hand, is rubbed with a mix of pepper, coriander and paprika. It also has a shorter cooking time.

What is Corned Beef

Corned beef is the beef that has been preserved via salt-curing. Corned beef is especially popular in Irish and Jewish cuisine. Generally, we use beef brisket to make corned beef. Brisket is the cut of meat from the breast or the lower chest of beef. The beef brisket then undergoes curing in a brine solution, with various seasonings. The next step is slowly simmering the meat until it is tender and flavourful. Brisket is usually a tough cut of meat, but the long cooking process and salt make it tender. 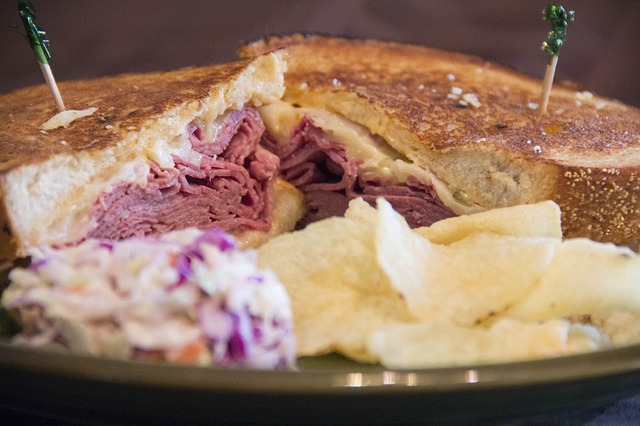 One of the main ingredients we use to make corned beef is a curing salt named Prague powder. This is what gives the beef its distinctive pink colour and prevents the risk of botulism. However, this ingredient includes sodium nitrite, which is toxic to humans.

Similarities Between Pastrami and Corned Beef

Difference Between Pastrami and Corned Beef

Pastrami is highly seasoned smoked beef, usually served in thin slices while corned beef is the beef that has been preserved via salt-curing.

Moreover, the most common cuts we use for pastrami are deckle (lean, wide, firm shoulder cut) or the navel end. However, we make corned beef from brisket, which is the lower chest area of the cow.

In brief, the difference between pastrami and corned beef lies in the cut of beef and the method of meat processing. We make pastrami with shoulder or navel cut and corned beef with brisket, which is the chest area of the cow. Moreover, after curing, pastrami undergoes smoking while corned beef undergoes boiling.