Plasmid and episome are two types of DNA elements which exist independently of the genome. In general, both of them can undergo autonomous replication. 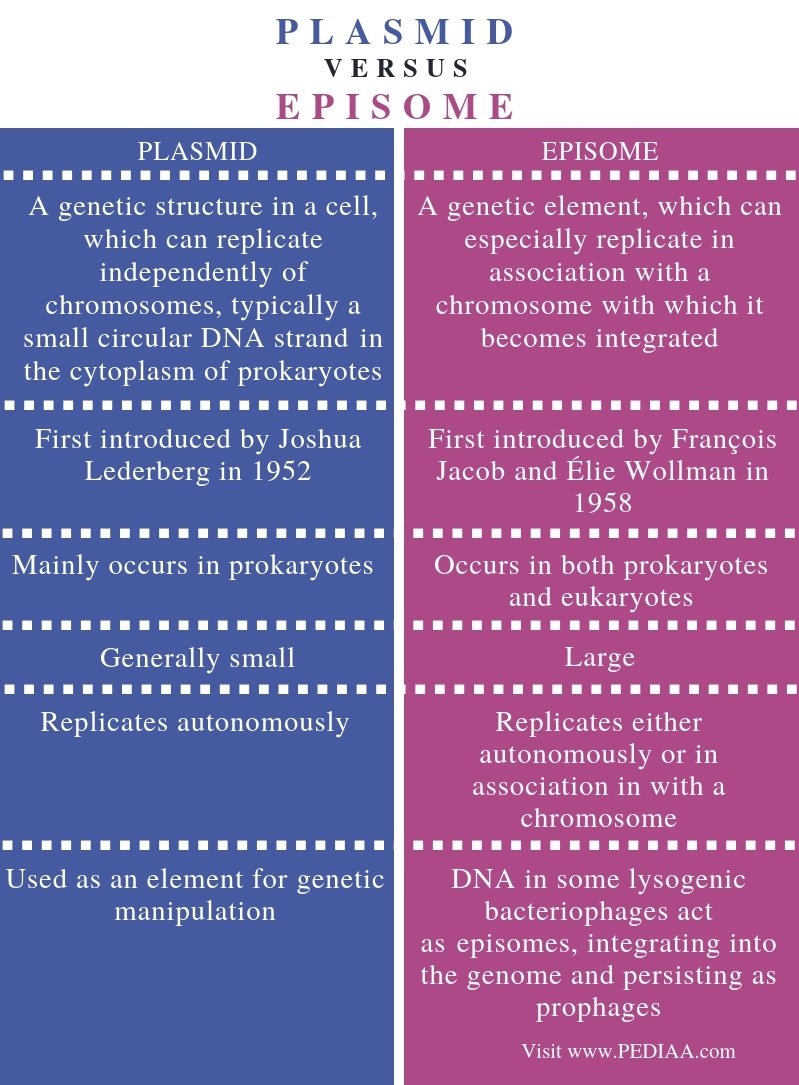 A plasmid is an extrachromosomal genetic element that mainly occurs in prokaryotes. Moreover, it can replicate independently of the genome. Generally, plasmids are small, circular, double-stranded DNA molecules. Furthermore, they do not contain genes required for the survival of bacteria. However, they contain some genes important for the selection of the host. Their size can vary from 1-200 kbp. Moreover, the number of identical plasmids can range 1-1000. That means different types of plasmids can occur inside the same cell. On the other hand, due to the autonomous replication, plasmids are known as replicons. They serve as a single-replicating unit due to the presence of an origin of replication.

What is an Episome

An episome is an integrative plasmid, which is a non-essential, extrachromosomal genetic element same as plasmids in prokaryotes. Generally, plasmids capable of integrating into the genome in prokaryotes are also known as episomes. However, the integration into the genome allows stable maintenance of the episomal DNA over several generations. As an example, DNA in some viruses such as herpesviruses, adenoviruses, and polyomaviruses serve as episomes. 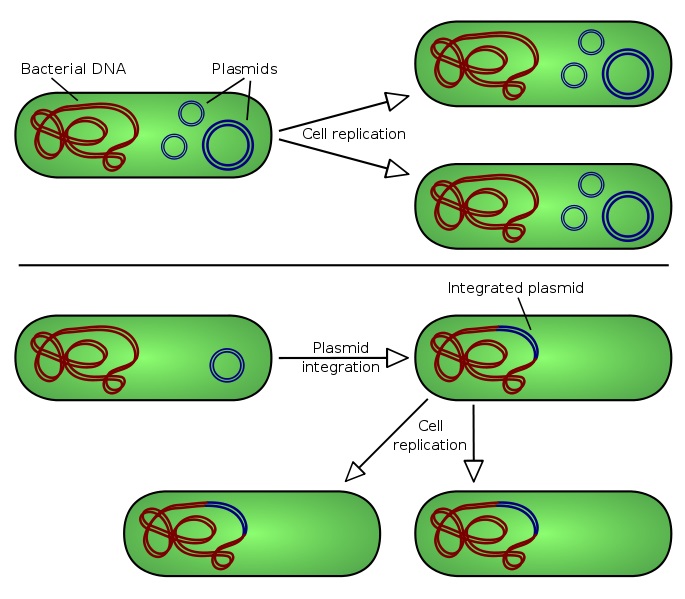 Furthermore, the F factor, which is an incompatibility group of plasmids, is another example of episomes. Generally, it exists in three states. Here, the cells with the autonomous, extrachromosomal state are known as F+ cells. Also, Hfr cells are the cells with F factors integrated into the genome. On the other hand, in the F prime state, F factor exists outside the chromosome, but with a section of chromosomal DNA attached to it. Moreover, episomes can be distinguished from other extrachromosomal elements by its large size, which is around 62 kbp. Also, episomes can replicate autonomously in the cytoplasm. In contrast, in eukaryotes, episomes refer to the non-integrative extrachromosomal genetic element.

Similarities Between Plasmid and Episome

Difference Between Plasmid and Episome

A plasmid refers to a genetic structure in a cell, which can replicate independently of chromosomes, typically a small circular DNA strand in the cytoplasm of prokaryotes while episome refers to a genetic element, which can especially replicate in association with a chromosome with which it becomes integrated. Thus, this is the main difference between plasmid and episome.

While plasmids mainly occur in prokaryotes, episomes occur in both prokaryotes and eukaryotes.

Another difference between plasmid and episome is that plasmids are generally small while episomes are large.

Furthermore, plasmids are used as an element for genetic manipulation while DNA in some lysogenic bacteriophages acts as episomes, integrating into the genome and persisting as prophages.