Reducing sugar and starch are two types of carbohydrates, which are one of the three types of macronutrients in animals. Also, carbohydrates contain carbon, hydrogen, and oxygen; hydrogen to oxygen ratio of 2:1. 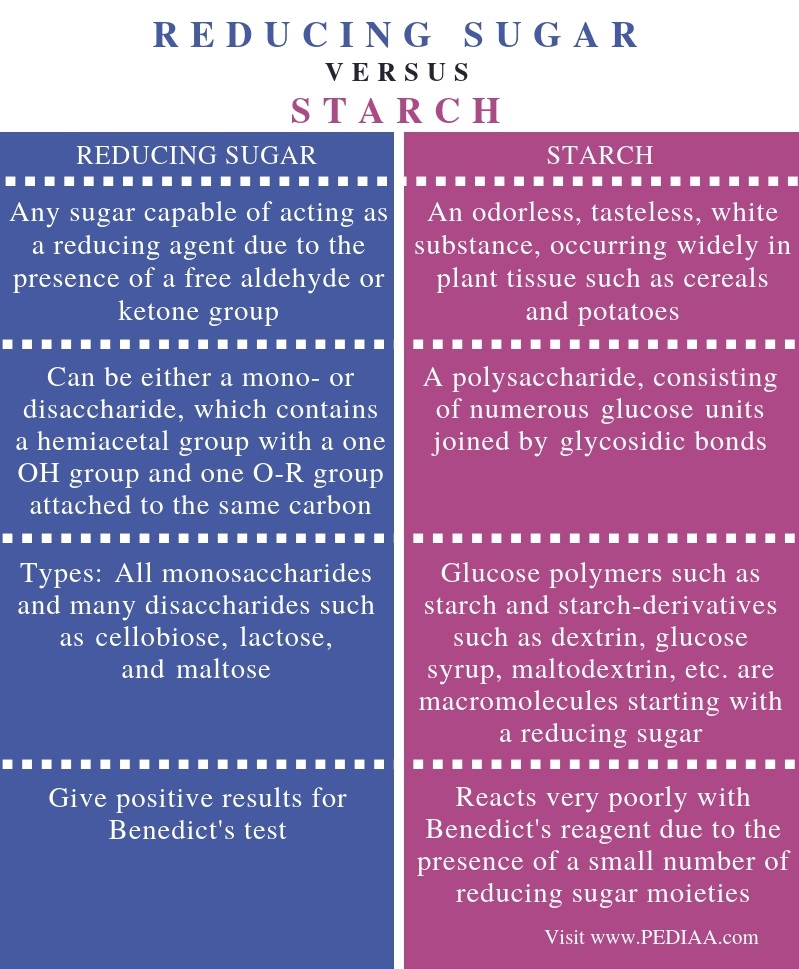 What is a Reducing Sugar

Furthermore, disaccharides have two monosaccharides connected by a glycosidic bond. However, in non-reducing disaccharides such as sucrose, glycosidic bond forms between anomeric carbons, making it convert into the open-chain structure without an aldehyde group. Still, in reducing disaccharides such as lactose and maltose, the open-chain structure has an aldehyde group. For instance, in starch such as starch and starch-derivatives, the polymer starts with reducing sugar, containing a free aldehyde. Significantly, more hydrolysis of starch makes more reducing sugar moieties.

Figure 1: Equilibrium between the Cyclic and Open Form of Maltose

Starch is the main storage form of carbohydrates in plants. Generally, it occurs in large amounts in staple foods like potatoes, wheat, maize (corn), rice, and cassava. Also, starch is a white color, which is tasteless, odorless, and insoluble in cold water and alcohol. For instance, in plants, glucose 1-phosphate is first converted into ADP-glucose, which undergoes polymerization via 1,4-alpha glycosidic bonds. Significantly, the addition of new ADP-glucose molecules occurs to the non-reducing end of the polymer. On the other hand, branching of the polymer occurs via 1,6-alpha glycosidic bonds. 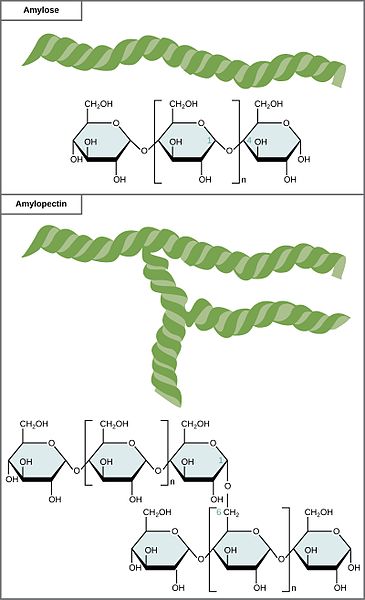 Moreover, based on the structure, there are two types of starch occurring in plants. They are linear amylose and branched amylopectin. In general, plants contain 25% of amylose and 75% of amylopectin. However, in industry, starch is important for the fermentation of ethanol to produce beer, whiskey, as well as biofuel. Also, starch has non-food uses in the industry as well.

Similarities Between Reducing Sugar and Starch

Difference Between Reducing Sugar and Starch

Reducing sugar refers to any sugar capable of acting as a reducing agent due to the presence of a free aldehyde or ketone group while starch refers to an odorless, tasteless, white substance, occurring widely in plant tissue such as cereals and potatoes.

Reducing sugar can be either a mono- or disaccharide, which contains a hemiacetal group with a one OH group and one O-R group attached to the same carbon while starch is a polysaccharide,  consisting of numerous glucose units joined by glycosidic bonds.

All monosaccharides and many disaccharides such as cellobiose, lactose, and maltose are reducing sugars while glucose polymers such as starch and starch-derivatives such as dextrin, glucose syrup, maltodextrin, etc. are macromolecules starting with a reducing sugar.

Result for the Benedict’s Test

Reducing sugars give positive results for Benedict’s test while starch reacts very poorly with Benedict’s reagent due to the presence of a small number of reducing sugar moieties.