For those of you who have not heard it before, this is the story of the Goldilocks and the three bears:

The Story of Goldilocks and the Three Bears

A little girl named Goldilocks goes for a walk in the forest. She comes upon a house and knocks on the door. When nobody answers the door, she walks right in.

She finds three bowls of porridge on the kitchen table. She tastes the first two bowls: one is too hot and the other too cold. She tastes the third – it tastes just right! So, she eats it up.

After eating the porridge, Goldilocks feels tired. So she goes to the living room of the house and finds three chairs there. The first two chairs are too big for her, but the third one is just right for her. But as she settles into the chair, it breaks.

Then she moves on to the bedroom, where she finds three beds. She finds one bed too hard, and the other too soft. The third bed is just right, and so she lies down and falls asleep.

Meanwhile the owners – a family of bears – return home. Seeing what has happened to their porridge, chairs, and seeing Goldilocks sleeping on their bed, they get angry. The little girl wakes up frightened when she sees and hears the bears. She jumps from the bed and runs away as fast as she can. 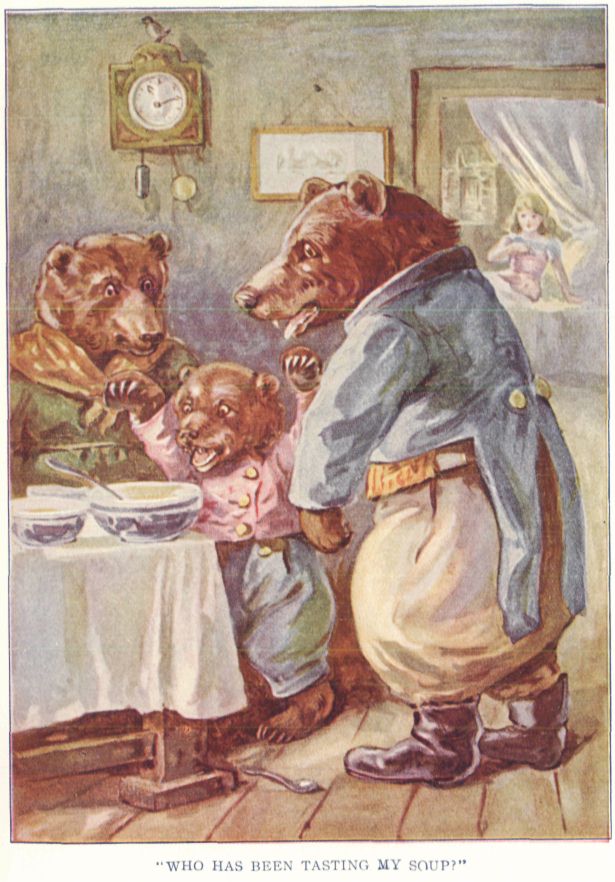 What is the Moral of Goldilocks and the Three Bears

The moral of the story is the need to respect the privacy and property of others and how your actions hurt others. What Goldilocks does by entering another’s house and using their property is wrong. She doesn’t think about how her actions may hurt the owners of the house even for a moment. She should have waited for the owners if she really wanted to enter the house.

When she enters the bears’ house and eats their food and uses their furniture, she is also very selfish. The fact that she tries on everything, the three bowls of porridge, three chairs and the three beds illustrates how self-centric she is.

In conclusion, the story Goldilocks and the three bears illustrate the need to respect others’ privacy and property.