Before going direct into the main topic, What type of chemical reaction produces a polymer, let us understand the basics of polymer first.

A polymer is a substance consisting of molecules that are arranged as very long sequences of one or more species of atoms or group of atoms linked to each other by covalent bonds. Polymers are considered as macromolecules owing to their massive molecular mass.  The groups of atoms or molecules that interconnect to form a polymer are known as monomers. Thus, monomers are the building blocks of polymers.

Polymers are classified in various ways.

Based on the structure, there are four types of polymers: linear polymers, cyclic polymers, branched polymers and network polymers.

The most common classification of polymers is based on their chemical and physical characteristics. According to this classification, polymers are grouped into as thermoplastics, elastomers, and thermosets. Thermoplastics are the polymers made up of linear or branched polymers; they soften upon the submission of heat. They can be moulded into any shape by using various moulding techniques. Elastomers are the polymers that have an elastic nature, due to which they can rapidly recover their original dimension when the applied stress is released. Thermosets are the rigid polymers made up of highly cross-linked network of polymers. These polymers cannot be remoulded once formed and degrade upon the application of heat.

What are Biodegradable Polymers

What Type of Chemical Reaction Produces a Polymer

The basic requirement for polymerization is the ability of monomers to form bonds with other monomer molecules. There are various types of chemical reactions involved in polymer industry to form polymers. All these reaction types can be categorised into two basic categories called step polymerization and chain polymerization. 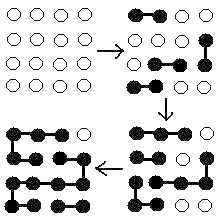 In chain polymerization, the polymerization reaction occurs only with a monomer attached to a reactive end-group and usually requires an initiator to start the reaction. The monomers that are used for chain polymerization usually contain double bonds, triple bonds or aromatic rings. These reactions can be carried out using anionic mechanisms, cationic mechanisms, free radical mechanisms and coordination mechanisms. The type of mechanism is determined based on the chemical property of the monomer and initiator used. The most common mechanism is free-radical polymerization, where monomers contain carbon-carbon double bonds or vinyl monomers such as ethylene, butadiene, styrene, acrylonitrile, vinyl chloride, etc. Initiators of free radical polymerization can generate radicals by various chemical reactions such as thermal decomposition, redox reactions, etc., in order to initiate the polymerization reaction. Some common examples of such initiators include hydroperoxides, bicarbonate peroxide, peroxyesters, azocompounds, inorganic water-soluble persulfates, hydrogen peroxide, etc.

An example of chain-growth polymerization by ring opening to polycaprolactone