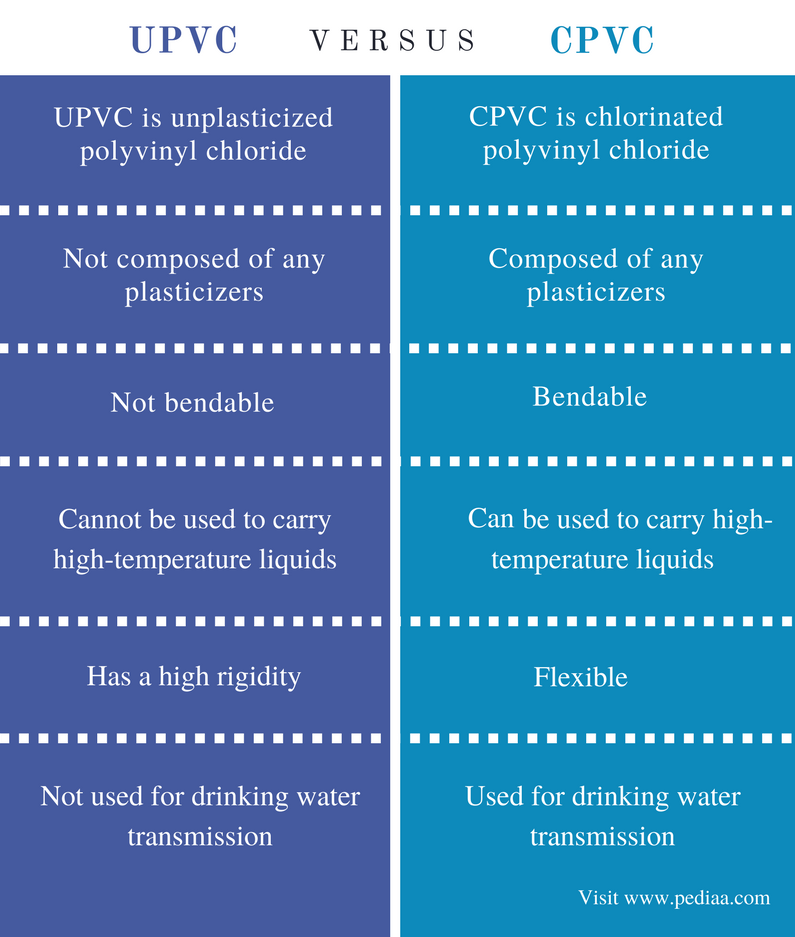 UPVC pipes are less bendable and are hard to work with due to their rigidity. A UPVC pipe is nearly rigid as an iron pipe. However, it is easy to cut with power tools. UPVC pipes are durable and fire-resistant. They are also recyclable.

UPVC can be used as a substitute for wood in construction sites. It is also used instead of cast iron for heavy-duty plumbing. Since it is incredibly resistant to chemical erosion, UPVC is a good choice for the production of plastic pipes. In addition, UPVC pipes can handle a wide range of temperatures. Therefore, a product obtained from UPVC material such as window frames do not change the shape depending on the weather condition. But at higher temperatures, UPVC can be reshaped.

CPVC or chlorinated polyvinyl chloride is a thermoplastic polymer. It is produced by the chlorination of PVC polymer. This chlorination is done to get the properties such as more flexibility and ability to withstand high temperatures.

The production process includes the chlorination of PVC via free radical chlorination. This reaction is initiated by using UV energy, which can decompose chlorine gas into radicals. These radicals then react with PVC and replace a portion of hydrogen atoms with chlorine atoms. Various additives are also introduced to the polymer material in order to make it easy to process.

CPVC can withstand very high temperatures (about 90oC). It is bendable, can be welded, and exhibit fire-retardant properties. This means it can slow or stop the spread of fire. CPVC is resistant to many acids, bases, alcohols, hydrocarbons, etc. But it is not resistant to chlorinated hydrocarbons. CPVC pipes can carry high-temperature liquids.

Difference Between UPVC and CPVC

UPVC: UPVC is not composed of any plasticizers.

CPVC: CPVC is composed of plasticizers.

UPVC: UPVC is not bendable.

CPVC: CPVC pipes can be used to carry high-temperature liquids.

UPVC: UPVC has a high rigidity.

UPVC: UPVC is not used for drinking water transmission.

CPVC: CPVC is suitable and is used for drinking water transmission.

PVC is a widely used plastic material. This polymer is often used for the production of pipelines. UPVC and CPVC are two types of PVC. UPVC is unplasticized PVC. This means plasticizers are not added to it. CPVC is Chlorinated PVC. Here, PVC is chlorinated with chlorine gas via free radical chlorination. The main difference between UPVC and CPVC is that UPVC is made without adding plasticizers whereas CPVC is made by adding plasticizers and undergoing the process of chlorination.