Algae and fungi both are eukaryotic organisms, which are classified under kingdom Protista and kingdom Fungi. Kingdom Protista contains protozoans and molds in addition to algae. Algae play a vital role in ecosystems as primary producers and producers of oxygen gasses. Fungi grow as chains of cells called fungal hyphae. Both algae and fungi form thallus. The main difference between algae and fungi is that algae are autotrophs, containing chlorophylls for photosynthesis whereas fungi are heterotrophs, obtaining organic material from the sources in the external environment.

Algae are the plant-like mostly unicellular organisms, classified under kingdom Protista. They are diverse and grow everywhere on earth. They are very important in ecosystems as primary producers of aquatic food chains while releasing oxygen gas to the atmosphere. Around 70% of oxygen is produced by algae. Algae are autotrophs, containing a single chloroplast per cell in order to carry out photosynthesis. But, some algae types are heterotrophs and are capable of growing in the dark as well. Algae that use both these nutrition types are called mixotrophic algae. Microscopic algae (microalgae), as well as large sea-weeds (macroalgae), can be identified. Cyanobacteria or blue-green algae are a type of microalgae which does not belong to eukaryotic algae. In eukaryotic algae, sexual reproduction occurs through the union of gametes. Eukaryotic algae are sexually dimorphic; hence, male and female gametes are produced by different individuals. Asexual reproduction of algae includes the production of motile spores and division by mitosis. Giant kelp is a type of macroalgae that contains a multicellular thallus-like structure. The kelp is shown in figure 1. 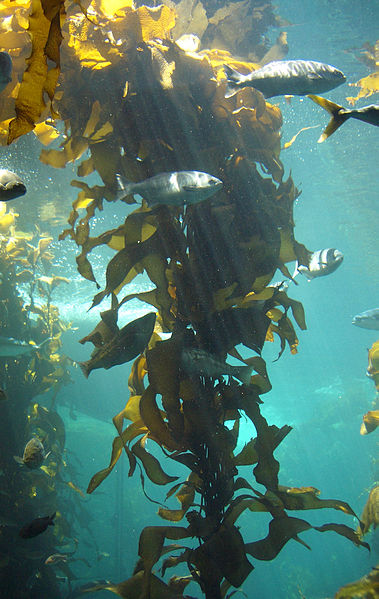 Three major types of algae are found: Chlorophyta, Rhodophyta, and Phaeophyta. Chlorophyta is green algae, which is the most diverse group of algae. Chlorophyll, beta-carotene, and xanthophylls are the pigments found in green algae. Rhodophyta is red algae, containing phycoerythrin as the photosynthesizing pigment. Phaeophyta is brown algae, containing chlorophyll c and fucoxanthin as the photosynthesizing pigments. 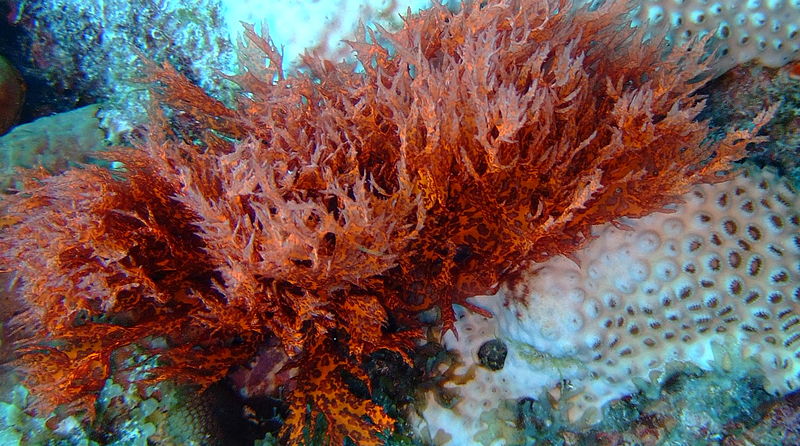 Fungi are either unicellular or multicellular eukaryotic organisms, which are classified under the kingdom fungi. They are mainly immobile and grow as fungal hyphae, which are cylindrical, thread-like chains of cells. Each cell is separated from the others in the chain by septa. The most characteristic feature in fungi is the chitin cell wall. Fungi live on dead matter like plants, decomposing them. Digestive enzymes are secreted on the external matter by fungi, absorbing sugar like simple nutrients though fungal hyphae. Hence, fungi are heterotrophs. Some fungi live as symbionts with plants and animals. Some other fungi become parasitic to the host organism as well. Fungi spread via reproductive spores, which are dispersed by wind or water. Macroscopic filamentous fungi produce fruit bodies, which can be consumable by other animals.

Fungi are classified under seven phyla. They are Microsporidia, Ascomycota, Glomeromycota, Basidiomycota, Chytridiomycota, Neocallimastigomycota, and Blastocladiomycota. Microsporidia are unicellular parasites in protists and animals. Ascomycota produces spores inside the ascus. Glomeromycota are parasites in plants, which invade roots of plants by fungal hyphae. Basidiomycota produce meiospores in basidia. Chytridiomycota, Neocallimastigomycota, and Blastocladiomycota produce zoospores which are mobile. Fruit bodies of Lycoperdon pyriforme, which is a puffball fungi growing on the dead wood are shown in figure 3. 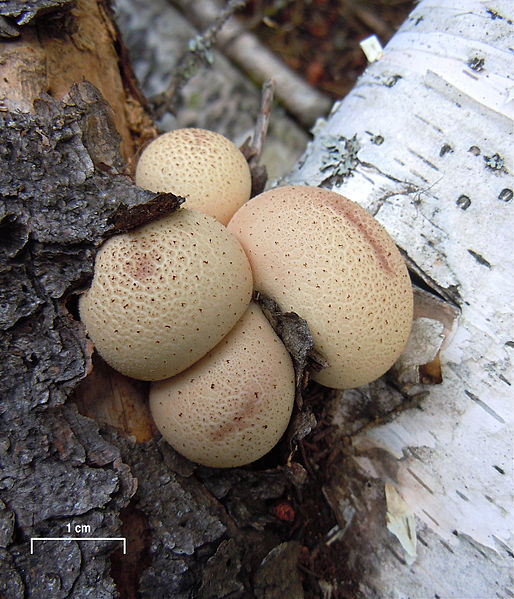 Difference Between Algae and Fungi

Algae: Algae are mostly aquatic. They are found in both fresh and marine water.

Fungi: Fungi are terrestrial. They are mostly found on dead matter with proper warmth and moisture.

Algae: Cyanobacteria are prokaryotic algae. Other algae are eukaryotes.

Fungi: All fungi are eukaryotes.

Chlorophyll and Other Photosynthetic Pigments

Fungi: Fungi do not possess any photosynthetic pigment.

Algae: Algae are autotrophs since they possess chlorophyll and other photosynthetic pigments.

Algae: Algae are incapable of living in the dark.

Fungi: Fungi are capable of living in the dark.

Algae: The cell wall of algae is mainly composed of cellulose.

Fungi: The cell wall of fungi is mainly composed of chitin.

Algae: Algae store their food in the form of starch.

Fungi: Fungi store food in the form of glycogen and oil globules.

Algae and fungi are two groups of organisms, which belong to kingdom Protista and kingdom Fungi respectively. Algae are autotrophs, containing photosynthetic pigments. Fungi are heterotrophs and are capable of digesting external, non-living, organic material and absorbing simple nutrients by the fungal hypae. Algae are found in different colors like green, red and brown due to the presence of different photosynthetic pigments. The main difference between algae and fungi is their nutrition mode.