What is a Lyric

Lyric is a poem expressing the writer’s emotions, usually briefly and in stanzas or recognized forms. Originally lyric was a special form of poetry in Greece, which was designed to be accompanied by the music of the lyre. In later years, it became a popular poetic form over Europe and ceased to be accompanied by music.

The main characteristic of a lyric is its subjectivity. Lyric is supposed to convey strong emotions, thoughts, and feelings of the narrator. Here, the poet directly addresses the readers, unlike other forms of poetry. It does not narrate a story or portrays characters and actions; it is a recount of the poets’ perceptions and emotions towards a certain topic. Love – romantic love, love towards nature, etc. is a common theme in lyric poems. Popular poetic forms such as elegies, odes and sonnets can be considered as lyrics or lyrical poems.

Another characteristic of lyrics is its brevity. A lyric is considerably shorter than dramatic or narrative poems. Often it follows a regular a regular metrical and rhythmical pattern.

Given below is a sonnet written by William Shakespeare. Try to observe the above-discussed characteristics in this verse.

Shall I compare thee to a summer’s day?
Thou art more lovely and more temperate:
Rough winds do shake the darling buds of May,
And summer’s lease hath all too short a date:
Sometime too hot the eye of heaven shines,
And often is his gold complexion dimmed,
And every fair from fair sometime declines,
By chance, or nature’s changing course untrimmed:
But thy eternal summer shall not fade,
Nor lose possession of that fair thou ow’st,
Nor shall death brag thou wander’st in his shade,
When in eternal lines to time thou grow’st,
So long as men can breathe, or eyes can see,
So long lives this, and this gives life to thee.

What is a Ballad

A ballad is a narrative poem that was traditionally set to music. Ballad is derived from the medieval French chanson balladée meaning dancing songs. Ballads were a popular form of verse from late medieval period till the nineteenth century. They were a favorite of the Romantic poets. Traditional ballads have no authorship; they were passed orally from one generation to another.

The main characteristic of a ballad is its narrative nature; a ballad was a part of traditional storytelling. Stories about love, tragedy, heroes, and hardships are popular topics in a ballad. Since ballads narrate a story, dialogues are incorporated into the verse. They are also written in common people’s language and dialect.

Since ballads were originally meant to be set to music, there is a musical quality in a ballad. The typical ballad meter is an alternation between lines in iambic tetrameter and iambic trimeter. They were generally written in quatrains with a regular rhyme scheme of ABCB. Ballads often have a refrain. However, there are different variations on rhyme and meter of ballads.

Given below is an excerpt from the ballad, The Three Ravens. Try to note some of the above-mentioned characteristics in this ballad.

“There were three ravens sat on a tree,

The one of them said to his make,

‘Where shall we our breakfast take?’

‘Down in yonder greenè field

There lies a knight slain under his shield;

‘His hounds they lie down at his feet.

So well do they their master keep;

‘His hawks they flie so eagerly,

There’s no fowl dare come him nigh.”

Difference Between Ballad and Lyric

Ballad is a narrative poem that was traditionally set to music.

Lyric is a short poem expressing the writer’s emotions, usually briefly and in stanzas or recognized forms.

Lyric does not contain characters, dialogues, and actions.

Ballads are somewhat longer since they narrate a story. 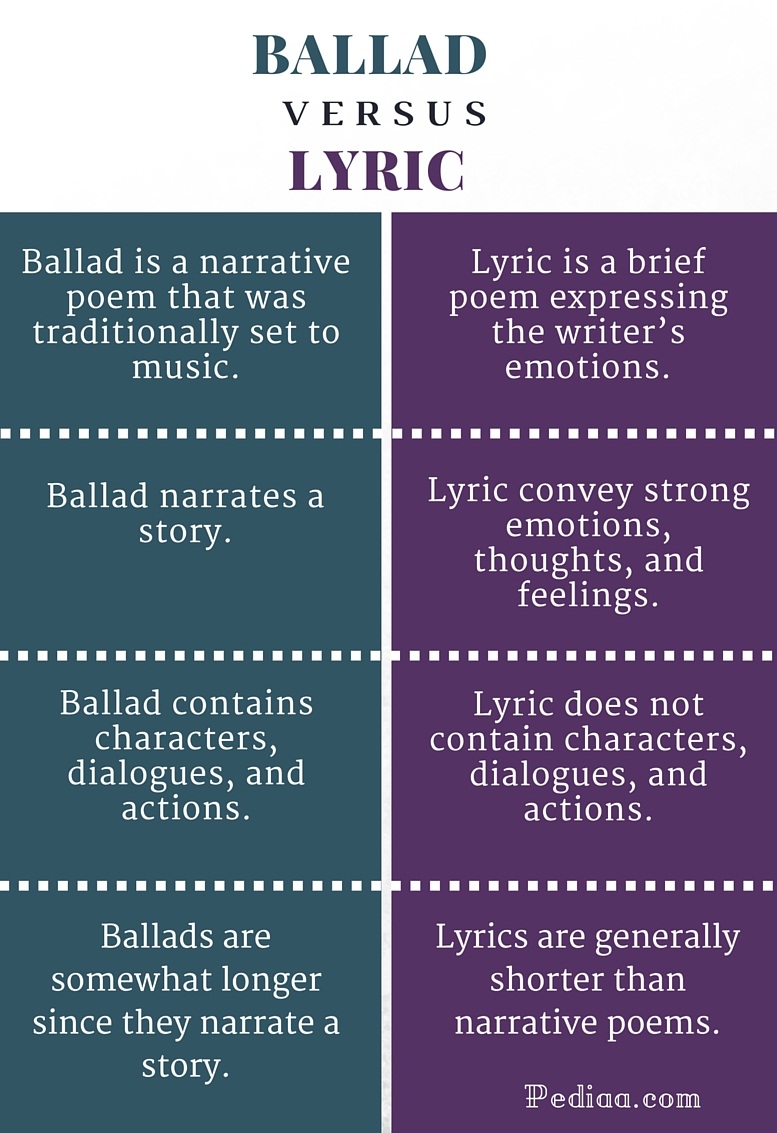