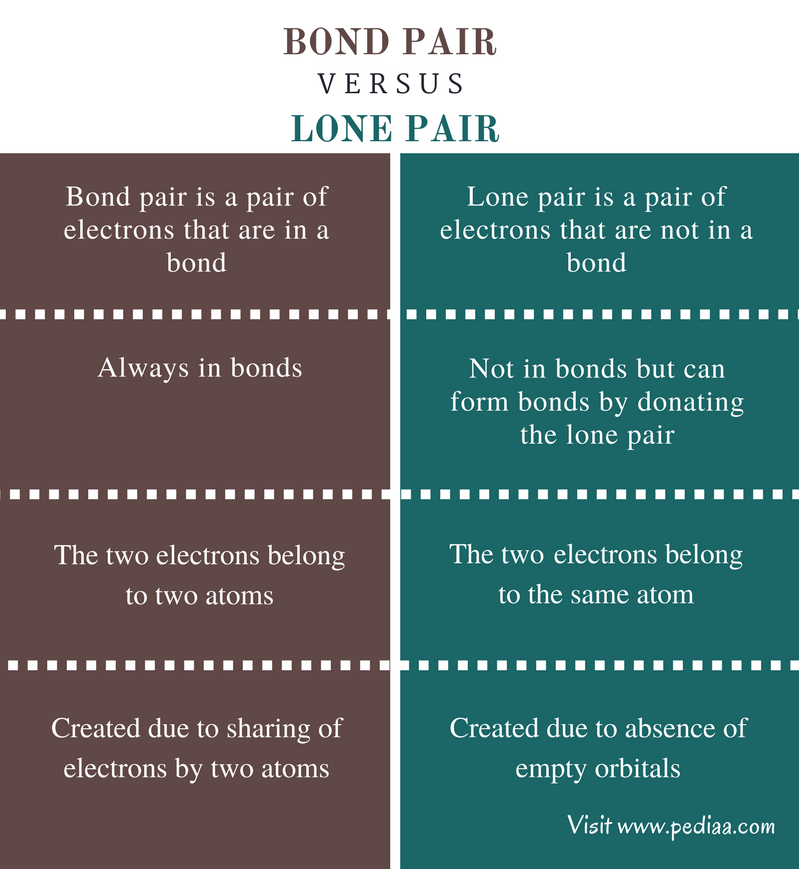 What is a Bond Pair

In coordination compounds, the ligands donate their lone electron pairs to a central metal atom. Although they were lone pairs they form coordination bonds that are similar to covalent bond after the donation; hence they are considered as a bond pair. This is because the two electrons are being shared between two atoms.

In covalent compounds, two atoms share their unpaired electrons to make them paired. This pair of electrons is called the bond pair. When there are double or triple bonds, there are bond pairs per each bond. For example, if there is a double bond, there are two bond pairs. Since a covalent bond is formed through the hybridization of orbitals of two atoms, a bond pair resides in hybridized orbitals. These hybridized orbitals can form either sigma bonds or pi bonds. Therefore bond pairs can be observed in either sigma bonds or pi bonds.

Figure 1: The coordination bond between NH3 and BF3

What is a Lone Pair

Sometimes these lone pairs can be donated to another atom which has empty orbitals. Then it forms a coordination bond. Thereafter, it is not considered as a lone pair since it becomes a bond pair. Some elements have only one lone pair. Some other elements have more than one lone pair. For example, Nitrogen (N) can form a maximum of three covalent bonds. But the number of valence electrons it has is 5. Therefore, three electrons are shared with other atoms to form bonds whereas other two electrons remain as a lone pair. But halogens have 7 electrons in their outermost orbital. Therefore, they have 3 lone pairs along with one unpaired electron. Therefore, halogens can have one covalent bond by sharing this one unpaired electron.

As shown in the above image, ammonia has one lone pair, water molecule has 2 lone pairs and HCl has 3 lone pairs.

But when considering phosphorous (P), it also has 5 electrons in the outermost orbital: 2 electrons in 3s orbital and other 3 electrons in three p orbitals. But, phosphorus can form maximum of 5 bonds. That is because it has empty 3d orbitals.

Figure 4: The orbital diagram for phosphorous and the possible hybridization

Phosphorous can have five bonds by including the 5 electrons in sp3d1 hybridized orbitals. Then, there are no lone pairs on phosphorous.

Bond Pair: Bond pair is a pair of electrons that are in a bond.

Lone Pair: Lone pair is a pair of electrons that are not in a bond.

Lone Pair: Lone pairs are not in bonds but can form bonds by donating the lone pair (coordination bonds).

Lone Pair: The two electrons belongs to the same atom in lone pairs.

Bond Pair: A bond pair is created due to sharing of electrons by two atoms.

Lone Pair: A lone pair is created due to absence of empty orbitals.