Home » Language » Difference Between Cause and Effect

Main Difference – Cause vs Effect

Cause is the reason behind an action or natural phenomena whereas effect is the result of a cause or the outcome of some chain of events that have happened.

There is a cause and is an effect in everything we do. Cause and Effect is a constant series of actions which logically follows from one action to the other.  When there is a cause, there is always effect/effects. In this article, we are going to look at the difference between cause and effect.

What Does Cause Mean

Cause is anything that makes another thing happen. Cause is the reason behind our action. Everything that happens in the world has a cause. For example; imagine that a person hits another person in anger. In this instance, anger is the cause of his action. If we think about the causes of water pollution, we arrive at answers like industrial waste, marine dumping, sewage and waste water, etc. Similarly, cause is the reason, the source behind the things we do and things that naturally happen.

‘Cause’ is used as a noun as well as a verb.

‘Cause’ as a Noun

“Scientists could not determine the cause of this new disease.”

“He promised me that he would not dismiss me without a good cause or reason.”

“His timid nature had caused him problems and led to bullying at school.”

“This disease can cause blindness.”

What Does Effect Mean

Effect is the result or outcome of a cause. It is what happens as a result of actions. If we again look at the earlier example of a person hitting another person in anger, the cause was anger, the effect would be one person getting injured. If we look at a larger phenomenon like environmental pollution, the effects would be spread of disease, the death of animals, and damage to the ecosystem.

Effect is also used as a noun as well as a verb.

Effect as a Noun

“He did research on the lethal effects of hard drugs.”

“The medicine’s effect was immediate.”

Effect as a Verb

“We finally effected the transition to computerized accounting last year.”

Difference Between Cause and Effect

Cause: Cause is the reason behind an action or natural phenomena.

Effect: Effect is the result of a cause.

Cause: The cause naturally precedes an effect.

Effect: The effect will always proceed a cause.

Cause: The cause can be a person, object, situation, or event that can result in something.

Effect: The effect is the result of the actions of the person or the outcome of some chain of events that have happened.

Cause: We use the words like ‘Why’ and’How’ to find the cause of an action.

Effect: We often use the questioning word ‘What’ to identify the effect of an action.

Cause: Cause is used as a noun as well as a verb.

Effect: Effect is more commonly used as a noun, though a verb form also exists. 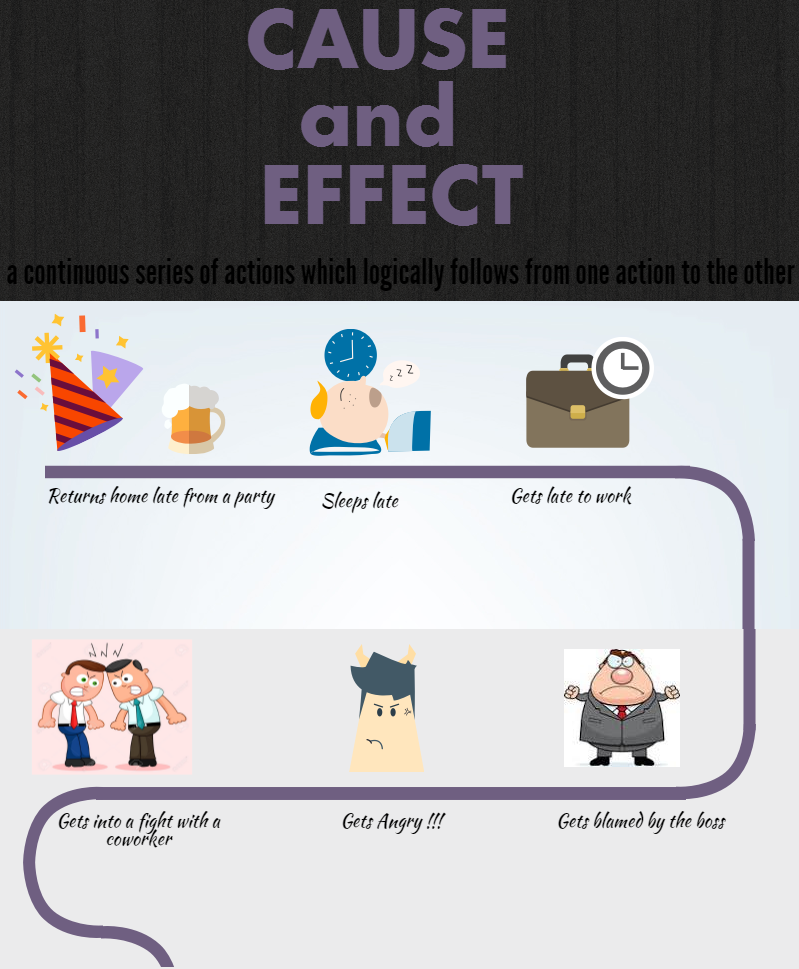