Cnidaria is a phylum, which contains invertebrate animals with specialized stinging structures in the tentacles that surround the mouth. Jellyfish, coral, Hydra, sea anemone, and sea pens are the examples of cnidarians. The body type of cnidarians can be two types: a polyp or a medusa. Polypoid cnidarians contain tentacles around their mouth, which faces up. The base of the body is attached to a surface. The sea anemone, Hydra, and coral are polypoid cnidarians. Medusoids are free-swimming animals, whose mouth faced down. Therefore, their tentacles also face down. The jellyfish is a medusoid cnidarian. All cnidarians are radially symmetric. The cnidarians are also called coelenterates since their body cavity is a hollow gut. They contain an incomplete digestive system and the mouth also serves as the anus. The cnidarians are diploblastic animals; hence, their body wall is made up of two cell layers: epidermis and the gastroderm. In between those two cell layers, a gel-like substance is present, which is called mesoglea.

A sea anemone is shown in figure 1. 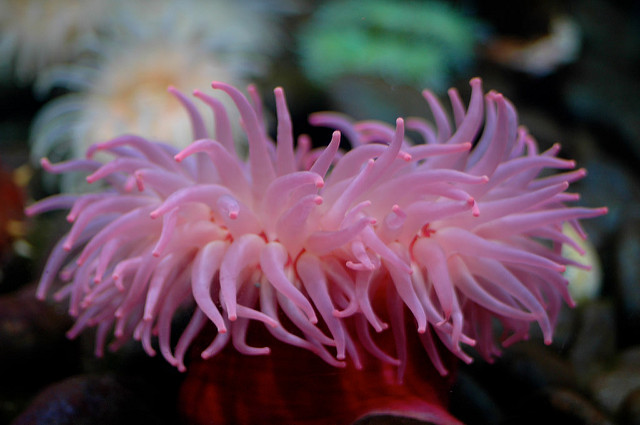 Cnidarians consist of stinging cells in their tentacles, which are used for feeding as well as for defense. The stinging cells are also called cnidocytes. The stinging structure is made up of a hollow thread-like structure, which contains barbs inside it. The thread can unfurl to the outside, wrap around the pray, and inject toxins. Cnidarians live in freshwater and marine water. The asexual reproduction of cnidarians occurs by budding. The sexual reproduction occurs by spawning in which the sperms and eggs are released to the water columns to produce free larvae.

Ctenophora is a phylum of coelenterates, which consists of comb jellies. Ctenophores are exclusively marine animals that can be mostly identified in warmer seas. Typically, they float around the surface of the water. However, some ctenophores live in 3000 meters deep sea. Ctenophores have a pear-shaped body with a 5-20 mm diameter. They exhibit a glass transparency. Their mouth occurs in the oral pole of the body while the sensory organ called statocyte is found in the aboral pole. Statocyte identifies the gravity. Two long tentacles are attached to the narrower end. The body surface of the ctenophores contains eight meridional bands in equal distances. These bands are called swimming plates. Each plate consists of transversely arranged comb-like structures in rows. The com-like structures consist of narrow plates, fraying from the outer ends. The constant movement of the frayed plates propels the animal through the water.

Ctenophores are considered to contain a complete digestive tract since their excretion occurs through minute apparatus called excretory pores. 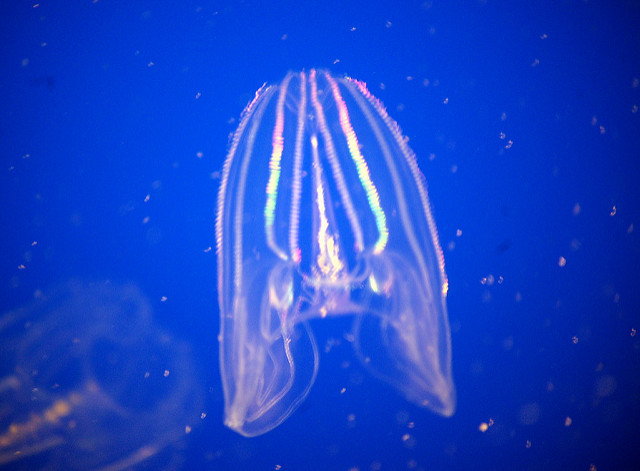 Ctenophores are hermaphrodites. The mature eggs and sperms are released to the external environment through the mouth for the fertilization. The two classes of ctenophores are Tentaculata and Nuda. A comb jelly is shown in figure 2.

Similarities Between Cnidaria and Ctenophora

Difference Between Cnidaria and Ctenophora

Cnidaria: Cnidaria refers to a phylum, which contains invertebrate animals with specialized stinging structures in the tentacles that surround the mouth.

Ctenophora: Ctenophora refers to a phylum of coelenterates, which consists of comb jellies.

Cnidaria: Cnidarians live in both freshwater and marine habitats.

Ctenophora: The Ctenophora does not show alteration of generations.

Cnidaria: Cnidarians are sessile or free-swimming.

Cnidaria: Cnidarians can be either unisexual or hermaphrodites.

Cnidaria: The five classes of cnidarians are Anthozoa, Hydrozoa, Cubozoa, Scyphozoa, and Staurozoa.

Ctenophora: The two classes of ctenophores are Tentaculata and Nuda.

Ctenophora: Comb jellies are the examples of ctenophores.