1. What is Depersonalization? – Definition, Signs and Symptoms, Etiology, Diagnosis

2. What is Derealization? – Definition, Signs and Symptoms, Etiology, Diagnosis

3. What is the difference between Depersonalization and Derealization? 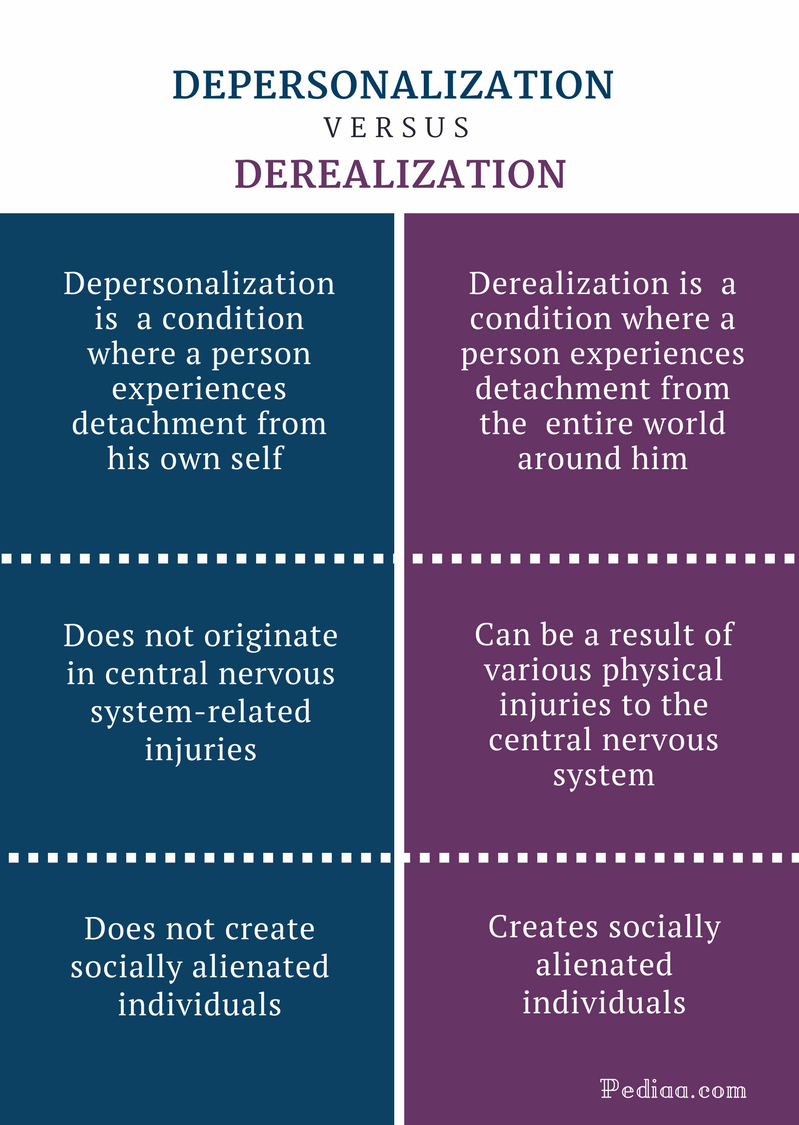 Being a type of dissociative disorder, which result in disruptions in one’s memory, consciousness, identity or perception, depersonalization is defined as a condition where a person experiences ‘detachment’ from his own self as if he is not the person consisting of a set of feelings, thoughts, emotions and physical activity. The affected individual will have feelings about a set of properties that are normal to any human being, but does not belong to him anymore. For example, a depersonalized person will often have complaints like ‘I know that it is my arm which is moving, but this is not really my arm, but someone elses’.

Even though the exact etiology of this condition is not very clear, traumatic situations and negative life events (war, abuse, and accidents) are known to be playing major roles in the predisposition. Also, substance-induced depersonalization is known to occur as a result of alcohol, antihistamines, antipsychotics, anti-anxiety medications, Benzodiazepines, caffeine, Carbamazepine, etc.

Most affected people will experience feelings of distorted perceptions of the body where he will feel as if he is a robot or living in a dream. Some people may even complain of symptoms suggestive of depression, anxiety, or panic attacks. Some cases of depersonalization can be mild and last for a very short period of time whereas some can be chronic and give rise to recurrences which will often result in disturbances in the day to day activities.

Additionally, depersonalization is usually associated with other psychiatric conditions such as anxiety disorder, schizophrenia and borderline personality disorder.

The diagnosis of depersonalization will often be made with the help of complete history from the patient along with a thorough physical examination where imaging and laboratory tests might be helpful to rule out medical conditions which may give rise to similar signs and symptoms.

Most cases of depersonalization will get resolved spontaneously over time whereas severe or recurrent cases might need medical interventions including psychotherapy (cognitive behavioral therapy, interpersonal therapy) and medication such as anti-depressants, antipsychotics, and anxiolytics.

In addition, clinical hypnosis might help some patients to achieve relaxation, concentration, and focused attention, helping them identify their thoughts, feelings, and emotions which might have become suppressed in the level of consciousness. 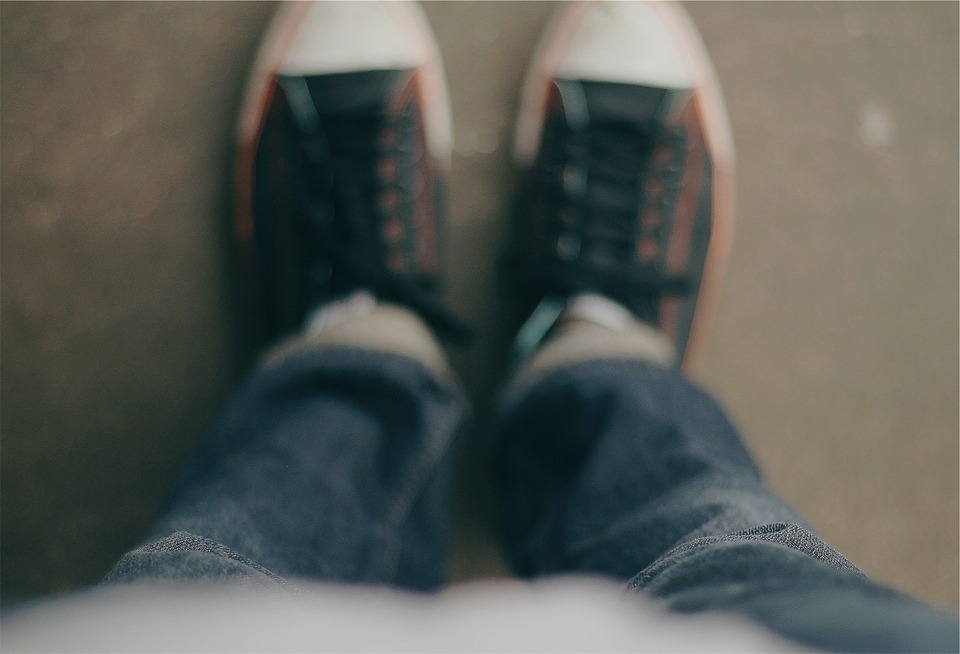 Derealization is defined as a sensation of detachment experienced by certain individuals as if the environment around them does not exist at all. This will often result in a continuous struggle between a person’s mind and body which may sometimes lead to a chronically disturbed mind and body connection (detachment from the reality).

As far as the etiology of this condition is concerned, short-term derealization usually occurs as a consequence of substance abuse, drug withdrawal or as a symptom of bipolar disorder, schizophrenia or dissociative identity disorder.

Often accompanied by abnormal visual and auditory sensations, the affected person will complain of visual distortions such as widened or narrowed visual field, blurriness or two-dimensional views where the world around will seem to be like a living dream or a movie projected on a screen.

An attack of derealization will usually last for about 15-20 minutes but can recur without any prior notice and persist even for hours to weeks.

The modality of treatment for derealization is similar to that of depersonalization which mainly includes antipsychotics, anxiolytics, and antidepressants based on the other associated mental conditions. 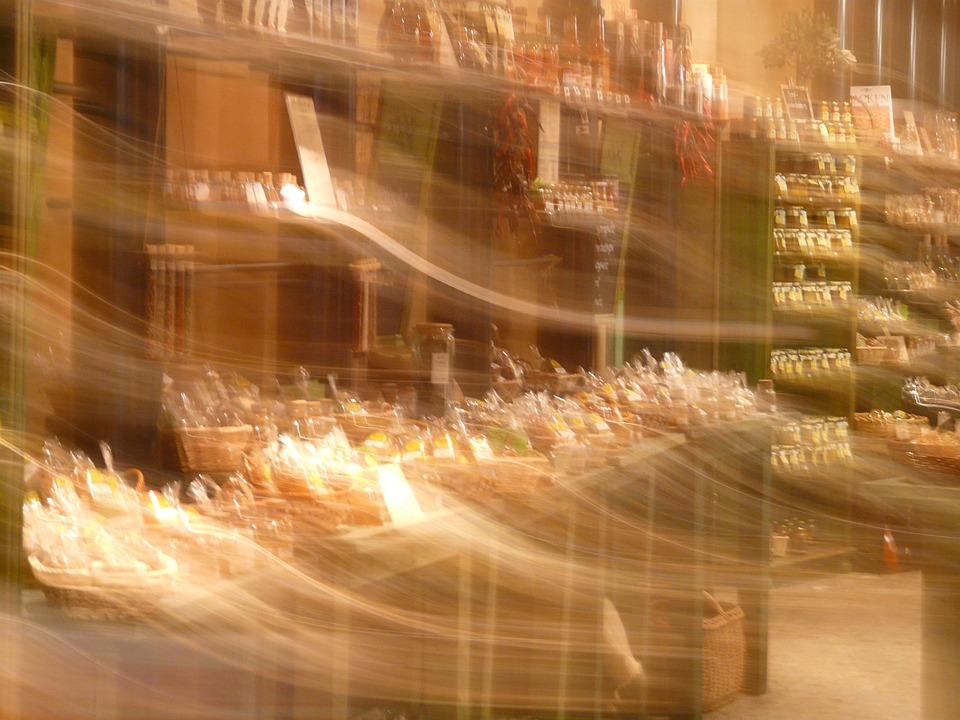 Difference Between Depersonalization and Derealization

The difference between depersonalization and derealization is caused by aspects such as the type of detachment they cause, their social application and how the disorder is connected to physical injuries.

Depersonalization is a state of hyper-awareness of one’s own body where the affected individual behaves as if he is a spectator watching himself, being outside the body.

Derealization is a state where a person feels as if he is detached from the entire world around him.

Furthermore, depersonalization, being a psychological condition, often accompanies anxiety disorders and is associated with various physical symptoms such as excessive cold sweating, but as a rule, it does not originate in central nervous system-related injuries.

On the other hand, derealization can be a result of various physical injuries to the central nervous system including trauma to the head.

Those suffering from derealization will often be noted as a socially alienated individual. They can hardly maintain any social relationship because of the perception that the outside world is thought to be detached from their body.