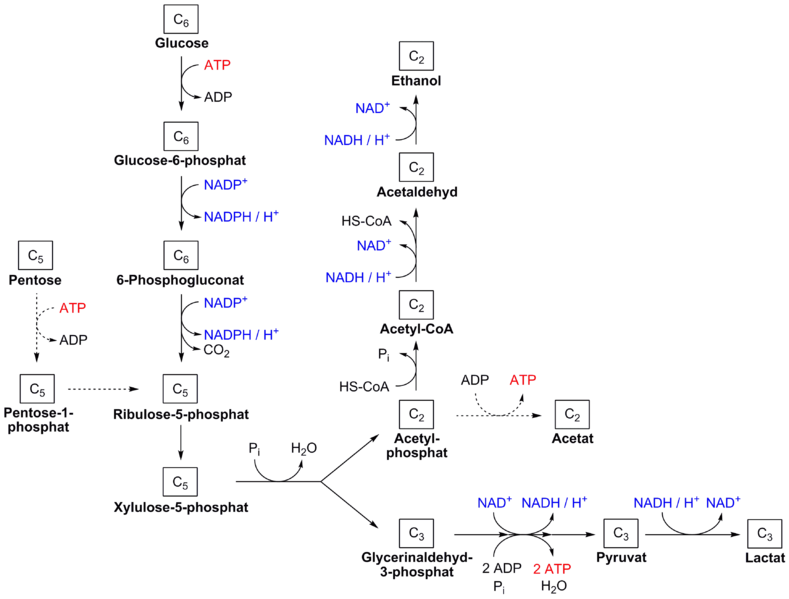 Respiration is the set of chemical reactions involved in the production of energy by completely oxidizing food. It releases carbon dioxide and water as by-products. Respiration is the most abundant and most efficient process among the processes of energy production. It occurs in higher plants and animals who are using complex cellular processes with high energy consumptions. During respiration, 36 ATPs are produced. The whole process occurs in the cytoplasm and mitochondria.

Respiration occurs through three steps: glycolysis, citric acid cycle and electron transport chain. Glycolysis occurs in the cytoplasm of the cell in the same way it occurs during fermentation. The two pyruvate molecules produced in the glycolysis is transferred into the mitochondrial matrix. They release two carbon dioxide molecules, one from each and become acetyl-CoA during oxidative decarboxylation. This acetyl-CoA enters into the citric acid cycle, which is also known as Krebs cycle. During the citric acid cycle, a single glucose molecule is completely oxidized into six carbon dioxide molecules, generating 2 GTPs, 6 NADH and 2 FADH2. These NADH and FADH2 are combined with oxygen, generating ATP during oxidative phosphorylation, which occurs in the inner mitochondrial membrane. During the oxidative phosphorylation, electrons in NADH and FADH2 are transferred through a series of electron carriers called electron transport chain. The net yield of ATPs is thirty six in respiration. The overall chemical reaction is shown below.

Difference Between Fermentation and Respiration

Fermentation: Fermentation is the chemical breakdown of an organic substrate like glucose by microorganisms like bacteria and yeast, typically giving off effervescence and heat.

Respiration: Respiration is the set of chemical reactions involved in the production of energy by completely oxidizing food. It releases carbon dioxide and water as by-products.

Fermentation: Oxygen is not required for fermentation.

Respiration: Oxygen is required for respiration.

Fermentation: No water is produced during fermentation.

Respiration: Water is produced as a by-product during respiration.

Fermentation: Fermentation generates only two ATPs by the breaking down of a single glucose molecule.

Respiration: Respiration generates 36 ATPs by the breaking down of a single glucose molecule.

Fermentation: The substrate, glucose is not completely broken down during fermentation.

Respiration: The substrate, glucose is completely broken down during respiration.

Fermentation: No ATP is produced during the regeneration of NAD+ in fermentation.

Respiration: Three ATPs are generated during the regeneration of NAD+ in respiration.

Respiration: In respiration, ATPs are generated from NADH and FADH2 through oxidative phosphorylation.

Fermentation: Fermentation is usually found in microorganisms like yeast.

Fermentation: Fermentation has a less contribution in the production of energy for the cellular processes on earth.

Respiration: Respiration has the highest contribution in the production of energy for the cellular processes on earth.

Fermentation and respiration are two processes involved in the catabolism of organic substrates which are used as food during the production of energy required by the cellular processes. During fermentation and respiration, the potential energy stored in organic molecules are converted into kinetic chemical energy in the form of ATP. Both processes begin with glycolysis, resulting in two pyruvate molecules. Glycolysis occurs in the cytoplasm of all cells on earth. Oxygen is not involved in the glycolysis. But in the presence of oxygen, pyruvate in the cytoplasm enters into the mitochondrial matrix in order to undergo citric acid cycle, which completely oxidizes pyruvate. This complete oxidization only occurs in respiration. NADH and FADH2 are also produced by the citric acid cycle. They are reduced by oxidative phosphorylation in the inner membrane of the mitochondria. In contrast, fermentation occurs in the absence of oxygen, incompletely oxidizing pyruvate either into ethanol or lactate. During ethanol fermentation, pyruvate is converted into acetaldehyde, which is then converted into ethanol. The NADH produced in the glycolysis of fermentation, donates its electrons to acetaldehyde while regeneration. Therefore, the main difference between fermentation and respiration is the ability to produce ATP during the regeneration process of NAD+.