The main difference between fish oil and omega 3 is that the fish oil is an oil produced from the fats or tissues of a fish whereas omega 3 is a fatty acid that is in polyunsaturated form. Furthermore, fish oil contains two forms of omega 3: EPA and DHA, while the three forms of omega 3 are alpha-linolenic acid (ALA), eicosapentaenoic acid (EPA), and docosahexaenoic acid (DHA).

Fish oil and omega 3 are two types of food components with a lot of benefits to the body, including the health of the heart. 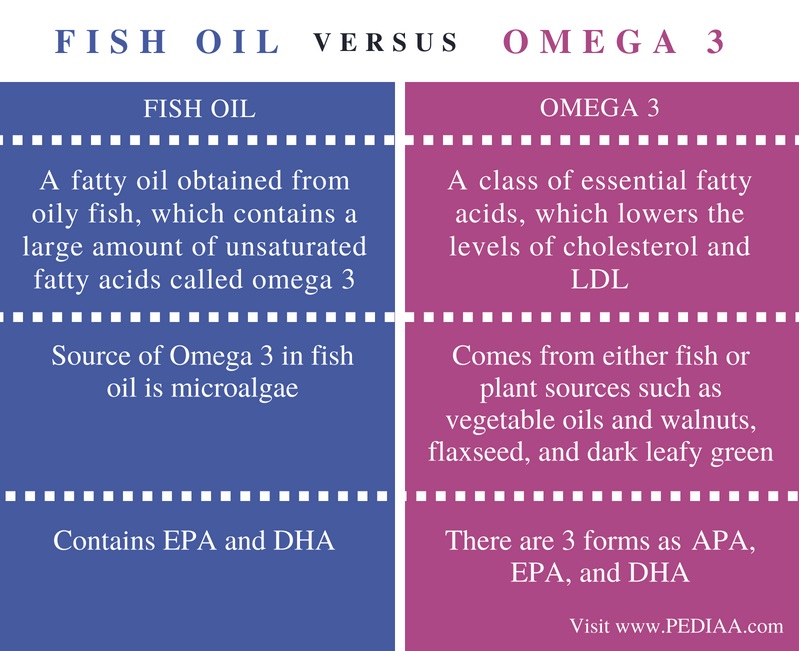 What is Fish Oil

Fish oil is a health supplement that mainly contains omega 3 fatty acids. The two main types of fatty acids in fish oil are EPA and DHA. Fish oil is extracted from the flesh of fatty fish such as tuna, herring, anchovies, mackerel, and salmon. Actually, fish do not produce omega 3 inside their body. However, they get it by consuming phytoplankton that consumes microalgae. Thereby, the original source of omega 3 is microalgae. 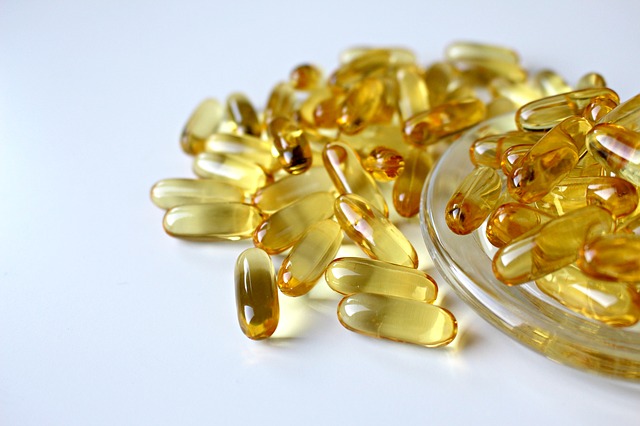 An important subtype of fish oil is cod liver oil extracted from the liver of the codfishes such as Atlantic cod and Pacific cod. Cod liver oil is a good source of EPA, DHA, and vitamin A and D. The most important feature of cod liver oil is its anti-inflammatory effect.

Omega 3 is a polyunsaturated fatty acid that reduces the amounts of triglycerides in the body, lowering the risk of death, heart attack and stroke. It also helps in regulating the heart rhythms, lowering the risk of arrhythmia and atherosclerosis. It has an anti-inflammatory effect as well. However, omega 3 cannot be produced by the human body; hence, it has to be taken into the body through the diet or as supplements

The three main forms of omega 3 are alpha-linolenic acid (ALA), eicosapentaenoic acid (EPA), and docosahexaenoic acid (DHA). ALA comes from plant sources such as vegetable oils (canola, soybean oil, etc) and walnuts. Both EPA and DHA mainly come from fish and they are more powerful than ALA. The current recommendation of omega 3 by WHO is 0.3-0.5 g of EPA and DHA and 0.8-1.1 g ALA per day. 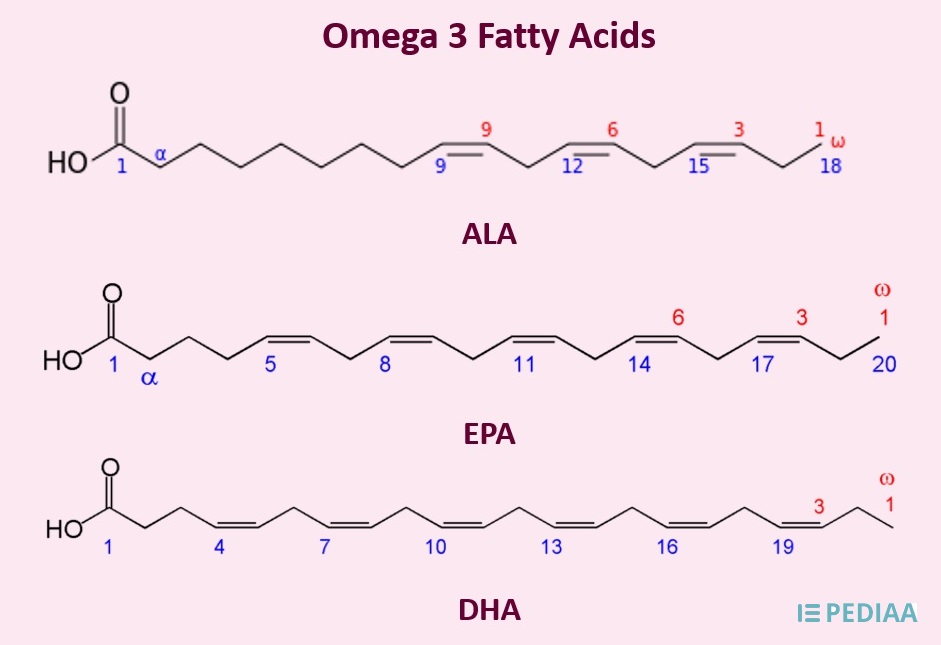 The other two types of omega fatty acids are omega 6, which is polyunsaturated, and omega 9, which is monosaturated. Omega 6 comes from vegetable oils, nuts, and seeds while omega 9 comes from olive oil, canola oil, safflower oil, avocado, and nuts such as peanuts and almonds.

Similarities Between Fish Oil and Omega 3

Difference Between Fish Oil and Omega 3

Fish oil refers to a fatty oil obtained from oily fish, which contains a large amount of unsaturated fatty acids called omega 3 while omega 3 refers to a class of essential fatty acids, which lowers the levels of cholesterol and LDL.

The source of Omega 3 in fish oil is the microalgae while omega 3 comes from either fish or plant sources such as vegetable oils and walnuts, flaxseed, and dark leafy greens.

Furthermore, the fish oil contains EPA and DHA while the three forms of omega 3 are APA, EPA, and DHA.

Fish oil is a source of omega 3. It is produced from the flesh of fatty fish. On the other hand, omega 3 is a polyunsaturated fatty acid, which comes in three forms ALA, EPA, and DHA. ALA is based on plant sources while EPA and DHA are based on fish. The main difference between fish oil and omega 3 is their correspondance.