Halogens and Xenon are chemical elements that are included in group 7 and group 8 of the periodic table, respectively. Halogens are very reactive elements. But xenon is a less reactive element. Halogens are the chemical elements in the group 7 of the periodic table and include F, Cl, Br, I and At. They have varying physical and chemical properties. Xenon is a noble gas that is in the group 8 of the periodic table. It is generally unreactive, but it can undergo several chemical reactions under extreme conditions. The main difference between halogens and xenon is that halogens have a single unpaired electron in their outermost orbital whereas xenon has no unpaired electrons in its orbitals. 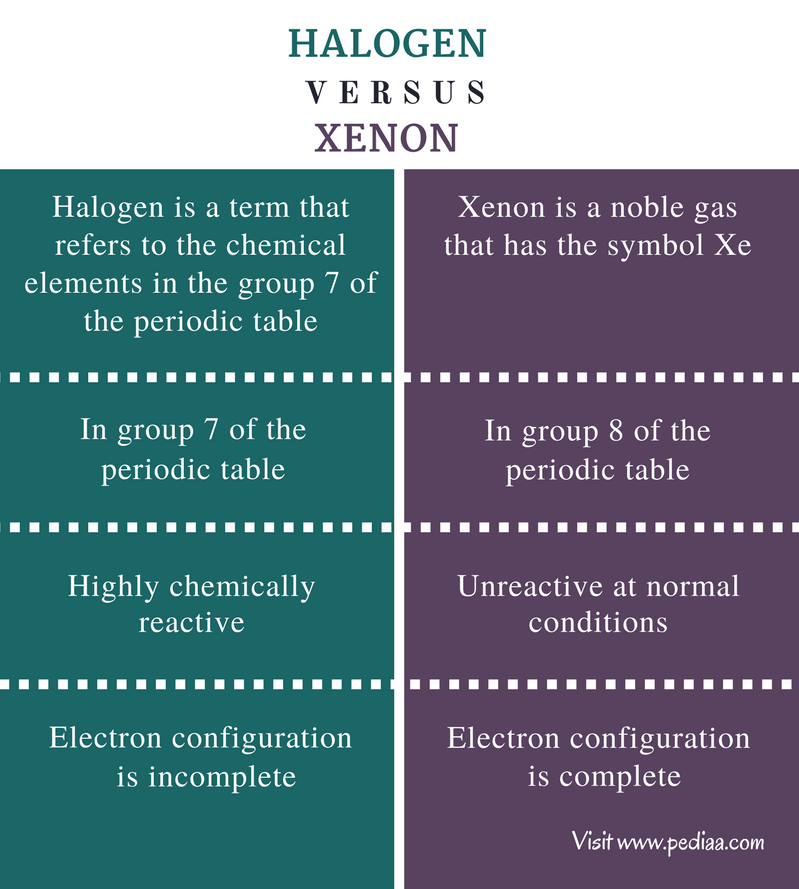 Halogen is a term used to represent the chemical elements in the group 7 of the periodic table of elements. This group includes fluorine (F), chlorine (Cl), bromine (Br), iodine (I) and Astatine (At). These 5 elements together are called halogens. They were given the name halogen because they all form sodium salts of similar properties such as sodium fluoride (NaF) and sodium chloride (NaCl).

In the group of halogens, all three states of matter can be observed at standard temperature and pressure. Fluorine and chlorine exist as gases; bromine exists as a liquid. Iodine exists in the solid form while Astatine is a radioactive element.

There are patterns of varying the physical and chemical properties down the group of halogens in the periodic table. For example, the chemical reactivity will decrease down the group due to the increase of the atomic size. However, halogens are highly reactive because they all have electron configurations ending with ns2np5. Since they lack one electron in order to fill their outermost orbital, they react with atoms or ions to obtain this electron. Therefore, halogens can be found in ionic compounds as well as in covalent compounds. The electronegativity of halogens decreases down the group.

In nature, halogens are found as diatomic molecules. Fluorine is the most reactive element among halogen elements due to its small size and lack of one electron to complete the octet rule. All halogens are good oxidizing agents. This is because they can easily be reduced to –1 oxidation state by gaining an electron.

Xenon is a noble gas that has the symbol Xe. The atomic number of xenon is 54. It is included in the p block of the periodic table and is in the group 8. Xenon atom is a very large atom compared to other noble gases. It exists as a monoatomic gas in the standard temperature and pressure conditions. The electron configuration of xenon is given as [Kr]4d105s25p6. Therefore, the outermost orbital of xenon is completely filled with electrons. It is very much stable and is less reactive.

One important characteristic of xenon is that it can form compounds under extreme conditions where most other noble gases cannot. For example, xenon can form halides by combining with halogens such as fluorine. Some of the fluorides that xenon can form are XeF2, XeF4 and XeF6. They are covalent compounds. 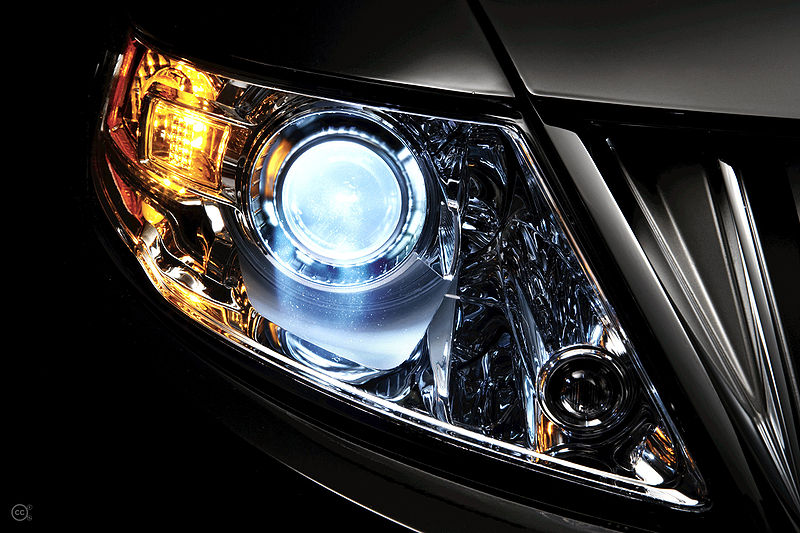 The appearance of xenon can be explained as a colorless and odorless gas. One of the major applications of xenon includes using as a light source. This is because xenon can produce a beautiful blue light that is glowing when excited by electrical discharge. This concept is used in xenon lamps.

Similarities Between Halogen and Xenon

Difference Between Halogen and Xenon

Halogen: Halogen refers to the chemical elements in the group 7 of the periodic table of elements.

Xenon: Xenon is a noble gas that has the symbol Xe.

Group in the Periodic Table

Halogen: Halogens are in the group 7 of the periodic table.

Xenon: Xenon is in the group 8 of the periodic table.

Halogen: The electron configuration of halogens is incomplete.

Xenon: The electron configuration of xenon is complete.

Halogens are very useful as oxidizing agents. They are very strong oxidizing agents due to their incomplete electron configurations. Xenon is an inert gas at standard temperature and pressure conditions. However, xenon can form compounds under special conditions. The main difference between halogens and xenon is that halogens have a single unpaired electron in their outermost orbital whereas xenon has no unpaired electrons in its orbitals.