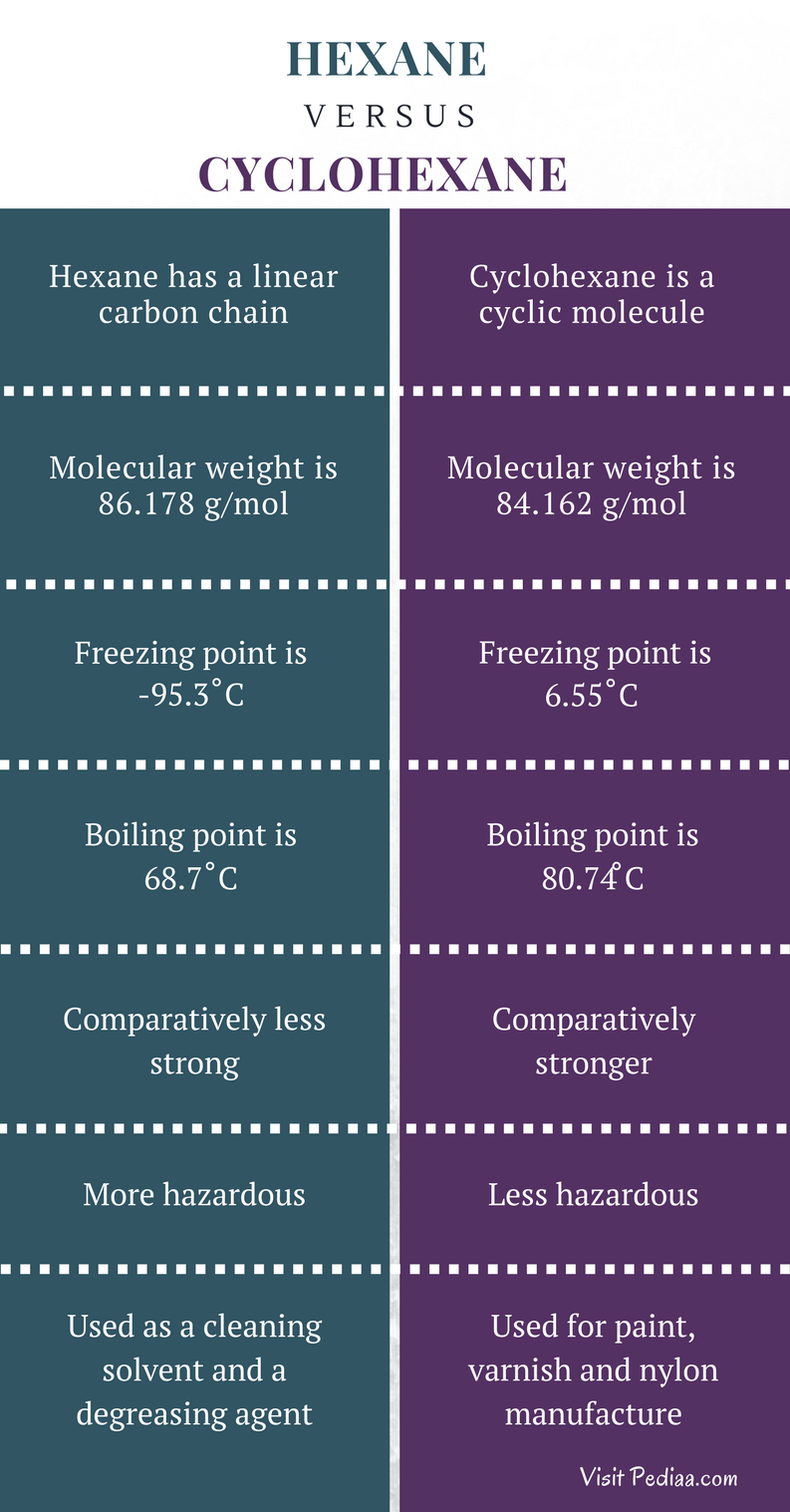 The molecular formula of hexane, which consists of 6 carbon atoms and 14 hydrogen atoms, is C6H14. All the bonds that connect carbons are single bonds. Hence, hexane is an alkane and is unbranched. The molecular weight of hexane is 86.178 g/mol.

Hexane, which is called n-hexane as well, is a colorless liquid that is often used as an organic solvent. It has a similar odor to petroleum. Hexane boils at 68.7 ̊C and freezes at -95.3 ̊C. Furthermore, it is highly flammable and has a relatively high vapor pressure, due to which it is highly volatile.

Hexane is a non-polar solvent and does not mix up with water. However, it is soluble in other organic solvents such as alcohol, ether, chloroform and acetone. This is abundantly used in extracting plant oils. As plant oils are non-polar, they readily dissolve in hexane. Moreover, it is used as a cleaning solvent and a degreasing agent in various industries.

Hexane is a part of crude oil paraffin fraction and natural gas, which is separated at 65-70 ̊C during crude oil refining. It is emitted by combusting polyvinyl chloride. Human exposure is mainly due to dermal contact or inhalation. Acute exposure may cause eye irritation, central nervous system depression and symptoms are nausea, headache, giddiness, and dizziness. Chronic exposure may result in polyneuropathy with numbness, muscular weakness, blurred vision, fatigue and headache in extreme conditions. Hexane is not reported to be carcinogenic.

What is Cyclic Cyclohexane

Cyclohexane, similarly to hexane, is a non-polar solvent and does not dissolve water. It is used as a solvent to dissolve substances such as fats, oils, waxes, lacquers, resins and cellulose ethers. Cyclohexane is often used in perfume manufacturing, for the production of adipic acid in nylon 66 manufacturing, paint and varnish industry etc. 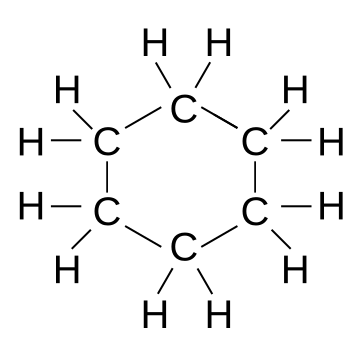 Cyclohexane is a non-corrosive and flammable liquid. It is a mild eye irritant, but inhalation of large quantities can cause central nervous system impairment. This may give rise to symptoms such as headaches, anesthesia, and convulsions. Cyclohexane is mainly released to the environment as a byproduct of various industries. It is a helping factor for the formation of photochemical smog.

Difference Between Hexane and Cyclohexane

Hexane: Hexane is used as a cleaning solvent and a degreasing agent.

Cyclohexane: Cyclohexane is used for paint, varnish and nylon manufacture.

The main difference between hexane and cyclohexane lies in their structural arrangement. Hexane is linear while cyclohexane is cyclic. Furthermore, hexane has a bit higher molecular weight than cyclohexane. This is due to the fact that cyclohexane has 2 hydrogens less compared to hexane.

The volume cyclohexane occupies is lower than hexane due to its cyclic structure. Hence, there’s a higher number of cyclohexane molecules in a given molecule when compared with hexane. The Van Der Waals forces between molecules are inversely proportional to the distance between molecules. Since cyclohexane molecules are closely packed, the molecular interactions are much stronger than that of hexane. Therefore, the energy required to break the bonds and evaporate it is much higher. Hence, cyclohexane has a higher boiling point. There is a vast gap between their freezing points as well. Cyclohexane is easily condensed due to its stronger molecular interactions.

Hexane and cyclohexane have a lot of similarities. They appear same to the eye and has a similar odor. Both are flammable. However, they have the different properties discussed above due to their structural difference.