Mole and molecule are two distinct terms used in chemistry. The term mole is used to represent an amount that cannot be measured with units like grams or milligrams. Therefore, a mole measures the number of atoms, ions or molecules. A molecule is a chemical species that is formed due to the combination of several atoms through chemical bonding. A molecule does not carry any electrical charge. The atoms that build up a molecule can be of the same element or different elements. The ratio between these atoms is different from one molecule to another. The number of molecules present in a system can be measured in moles. The main difference between mole and molecule is that mole is a unit of measurement of quantity whereas molecule is a chemical species that is made out of atoms. 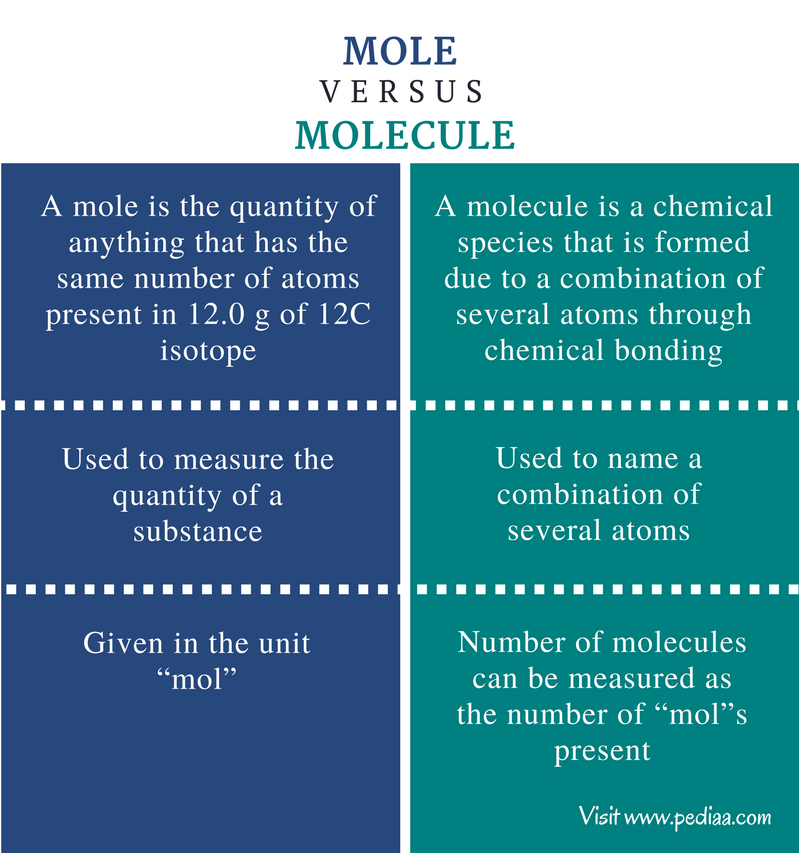 What is a Mole 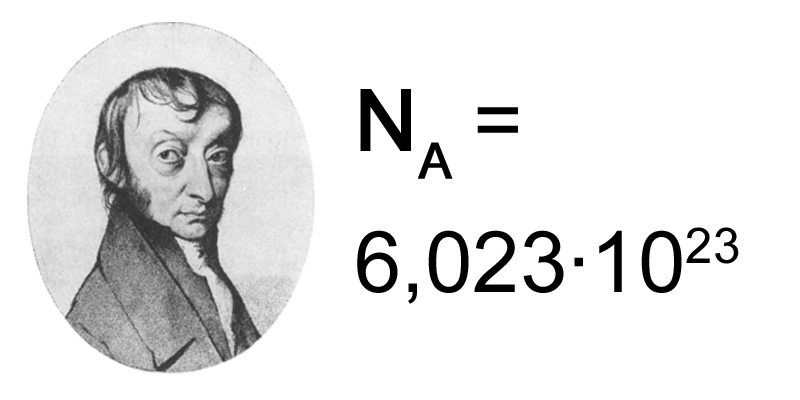 The number of moles can be given by the unit “mol”. The term mole can be used with any chemical species such as atoms, molecules, ions, etc. Therefore, one mole of sulfur means 1 mol of sulfur atoms. One mole of carbon dioxide means, 1 mol of CO2 molecules.

When it comes to the atomic level, units like grams or milligrams are not that much useful since we need to measure very minute amounts. In 1805, John Dalton came up with the first standard atomic weight table which was composed of the atomic weight of each element with respect to hydrogen. The atomic weight of hydrogen was taken as 1. Therefore, these were relative atomic masses. Later, with the development of atomic theory, the concept of mole was introduced by Wilhelm Ostwald, a German scientist. Since then, mole became a basic SI unit that is symbolized by “mol.”

Mole is a commonly used term in chemical reactions. The amount of product that can be obtained by a certain amount of reactants can be predicted by determining the mole ratios between reactants and products of a chemical reaction. The atomic weight is given as the mass of one mole of that element. If not, it is very difficult to handle the weight of atoms since it is a very minute value.

What is a Molecule

A molecule is a chemical species that is formed due to a combination of several atoms through chemical bonding. These bonds can be covalent bonds, ionic bonds or coordination bonds. These combinations of atoms may include the atoms of the same element or different elements. Moreover, the ratio between these atoms in a molecule is unique to that molecule. If the combination is changed, it results in a new molecule. For example, O2 is a molecule, O3 is also a molecule. But they are different molecules.

Single atoms are not molecules. Compounds are molecules that are made out of several different elements. Therefore, all molecules are not compounds because some molecules are composed of atoms of only one element such as H2 and O2.

Figure 2: Molecules can be found as either simple molecules or complex molecules.

The above image shows a complex molecule composed of a high number of atoms attached to each other through covalent bonds.

Difference Between Mole and Molecule

Mole: A mole is the quantity of anything that has the same number of atoms present in 12.0 g of 12C isotope.

Molecule: A molecule is a chemical species that is formed due to a combination of several atoms through chemical bonding.

Mole: Mole is used to measure the quantity of a substance.

Molecule:  Molecule is used to name a combination of several atoms.

Mole: The mole is given in the unit “mol”.

Although the two terms moles and molecules are distinct terms, the concept of moles can be used to measure the amount of molecules present in a sample. The main difference between mole and molecule is that mole is a unit of measurement of quantity whereas molecule is a chemical species that is made out of atoms.