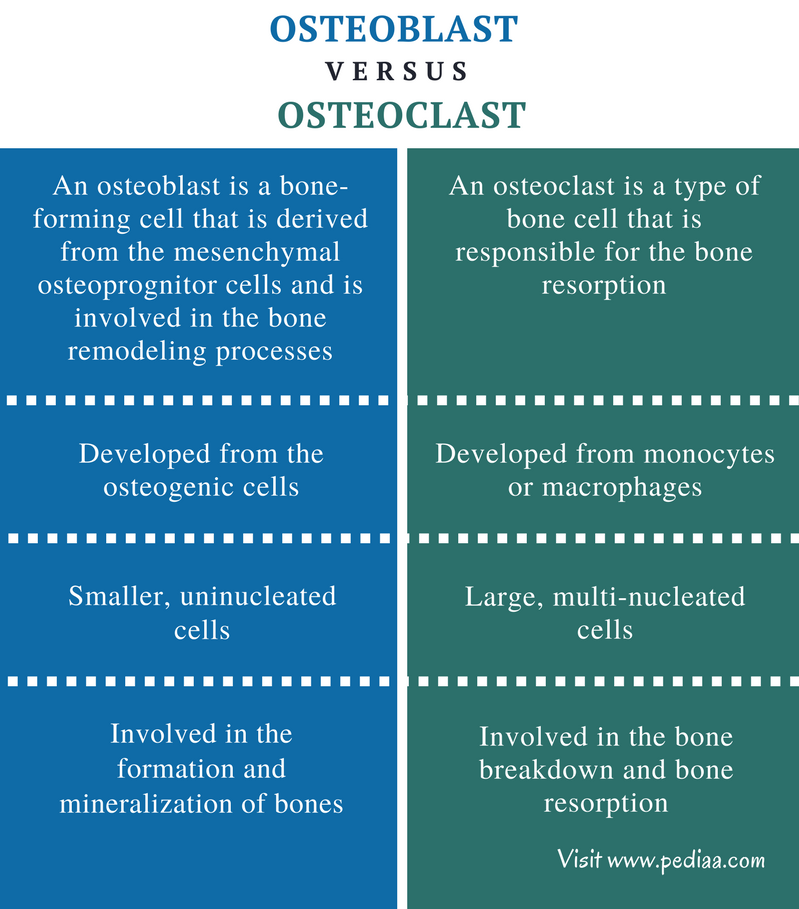 What is an Osteoblast

An osteoblast is a type of bone-forming cell, which is involved in the formation and mineralization of bones. Osteoblasts help in both initial bone formation and later bone remodeling processes. These cells are found as a closely packed, sheath of cells on the surface of the bone. Osteoblasts are developed from osteogenic cells in the periosteum. The periosteum is the tissue that covers the outer surface of the bone. Osteoclasts can also be found in the endosteum of the marrow cavity. Many products of osteoblasts such as growth factors, collagen, hormones such as osteocalcin, and enzymes such as collagenase and alkaline phosphatase are involved in the bone formation. The unmineralized part of the bone is called osteoid. 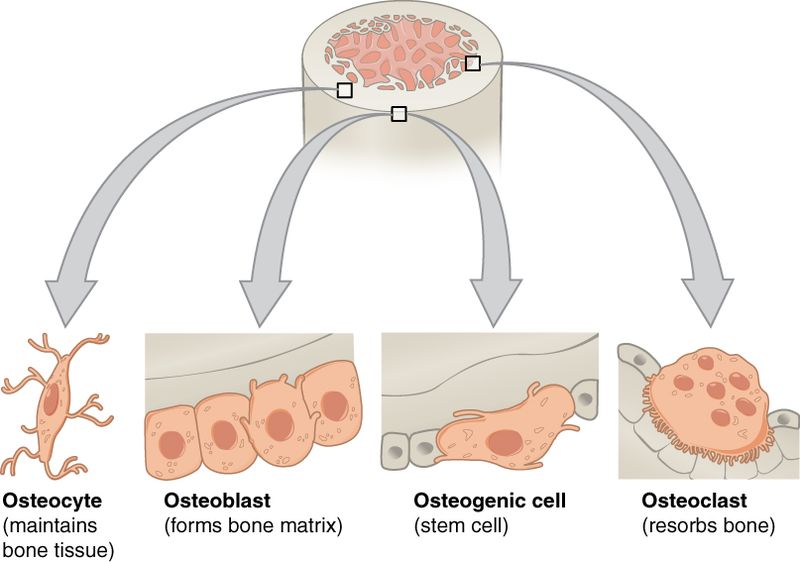 Once the osteoblast is surrounded with its growing matrix, the cells are trapped in a space called lacuna. These trapped osteoblasts become mature bone cells called osteocytes. Osteocytes can communicate with the bone surface and receive nutrients through long, meandering channels called canaliculi. The four types of bone cells and their functions are shown in figure 1.

What is an Osteoclast

An osteoclast refers to a type of bone cell responsible for the bone resorption. Since bone is a dynamic tissue, the continuous formation and breakdown occur in it. Bone breakdown can occur in response to the calcium requirement of calcium. That means bones serve as a calcium reservoir in the body. The continuous destruction of bones is mediated by osteoclasts. Osteoclasts are found on the surface of bones. The small depressions on the bone surface which are occupied by osteoclasts are called Howship lacunae. These small depressions are formed by the action of enzymes secreted by osteoclasts. Osteoclasts are derived from circulating cells such as monocytes and macrophages. They can be derived from the bone marrow as well. 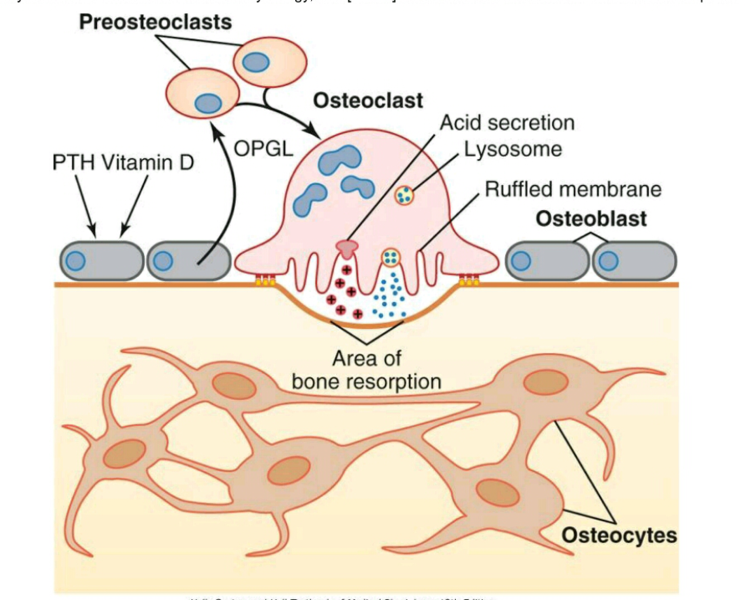 Osteoclasts are multinucleated cells with about 200 nuclei per cell. Many of the osteoclasts comprise around 5 to 20 nuclei per cell. Microvilli are extended from osteoclasts to the bone surface, forming a brush-like structure at the active sites of bone resorption. The acid phosphatases secreted by the osteoclasts dissolve both collagen, calcium, and phosphorus in the bone. First of all, the bone is broken down into small fragments, which are then engulfed by osteoclasts. The digestion of the fragments occurs in the cytoplasmic vacuoles inside the osteoclast cells. The calcium and phosphorous produced by the demineralization of bones are released into the blood stream. Osteoclasts do not work on the osteoid. An osteoclast in an area of bone resorption is shown in figure 2.

Similarities Between Osteoblast and Osteoclast

Difference Between Osteoblast and Osteoclast

Osteoblast: An osteoblast is a bone-forming cell that is derived from the mesenchymal osteoprogenitor cells and is involved in the bone remodeling processes.

Osteoclast: An osteoclast is a type of bone cell that is responsible for the bone resorption.

Osteoblast: Osteoblasts are developed from the osteogenic cells.

Osteoclast: Osteoclasts are developed from monocytes or macrophages.

Size of the Cells

Osteoblast: Osteoblasts are involved in the formation and mineralization of bones.

Osteoclast: Osteoclasts are involved in the bone breakdown and bone resorption.