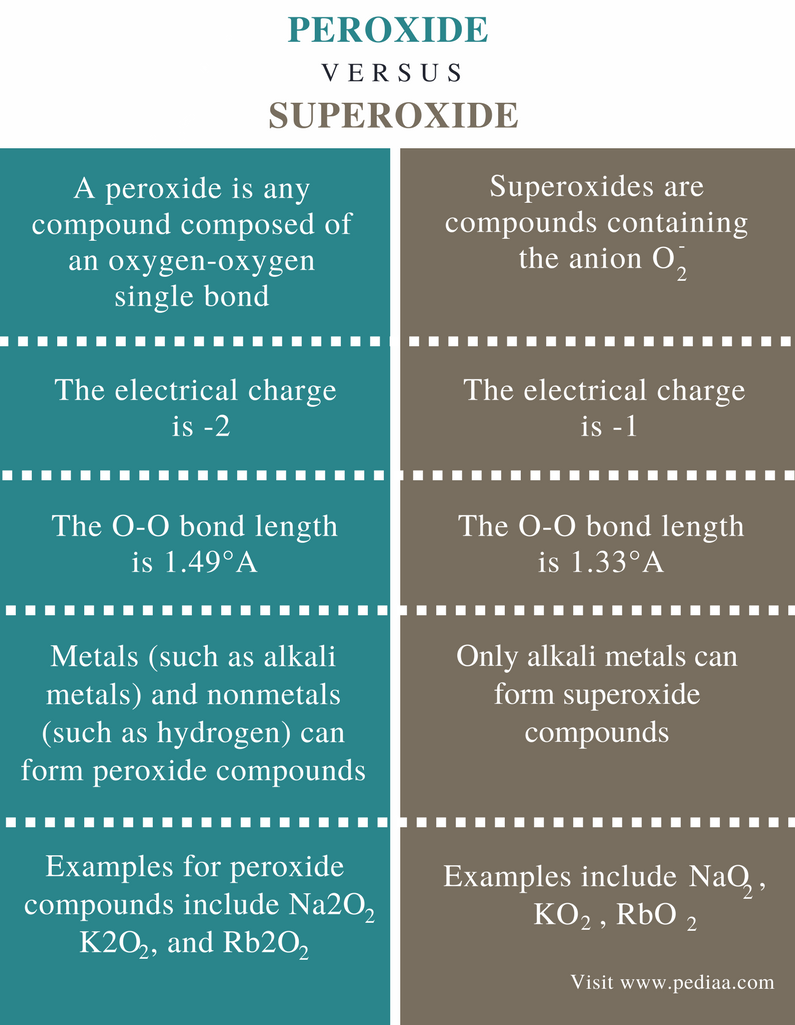 A peroxide is any compound composed of an oxygen-oxygen single bond. Therefore, the main feature to identify a peroxide compound is the presence of this O-O covalent bond. Sometimes, this bond can be observed as an anion in an ionic compound. Then it is given in symbols as O2-2. This is called the peroxide anion. When the O-O bond is found in a covalent compound, it is called a peroxo group or peroxide group.

Figure 1: H2O2 is the Simplest Peroxide

Peroxides can be found in biological systems and in nature. For example, some enzymes in our cells use peroxides to catalyze certain reactions. Some plant species use peroxide compounds as signaling chemicals. Peroxides are used in laboratory scale applications as well. It is very useful in organic chemistry in order to obtain the anti-Markovnikov product from an organic reaction. 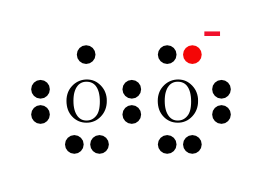 This anion is also composed of O-O single bond. The superoxide anion is highly reactive because the -1/2 oxidation state is not stable. Superoxide anion is considered as a free radical that exhibit paramagnetism. That is due to the presence of an unpaired electron on one oxygen atom (as shown in the above image).

When these superoxide compounds are dissolved in water, the system undergoes disproportionation rapidly. Disproportionation is a redox reaction in which a compound of intermediate oxidation state converts to two different compounds. Here, superoxide anion and water react to form O2 and OH– ion.

This reaction is why potassium superoxide is used as an oxygen source in chemical oxygen generators in space shuttles and submarines.

Difference Between Peroxide and Superoxide

Peroxide: A peroxide is any compound composed of an oxygen-oxygen single bond.

Peroxide: The chemical formula of peroxide anion is O2-2.

Superoxide: The chemical formula of superoxide anion is O2–.

Peroxide: The electrical charge of peroxide ion is -2.

Superoxide: The electrical charge of superoxide ion is -1.

Superoxide: The O-O bond length in superoxide ion is 1.33°A.