Both plastids and plasmids are self-replicative bodies found naturally in bacteria and plants respectively. Chloroplasts, chromoplasts, and leucoplasts are the three main types of plastids in plant cells. Chloroplasts contain pigments called chlorophyll to produce glucose inside the cell. Plastids also contain their own DNA. Plasmids are modified to use as carriers of foreign DNA segments into a target cell. Since plastids are evolved by endosymbiosis, both plastids and plasmids can be considered to have a prokaryotic origin. The main difference between plastid and plasmid is that plastid is an organelle, manufacturing important chemicals for the cell whereas plasmid is a double-stranded, circular DNA, which is separate from cell’s genome. 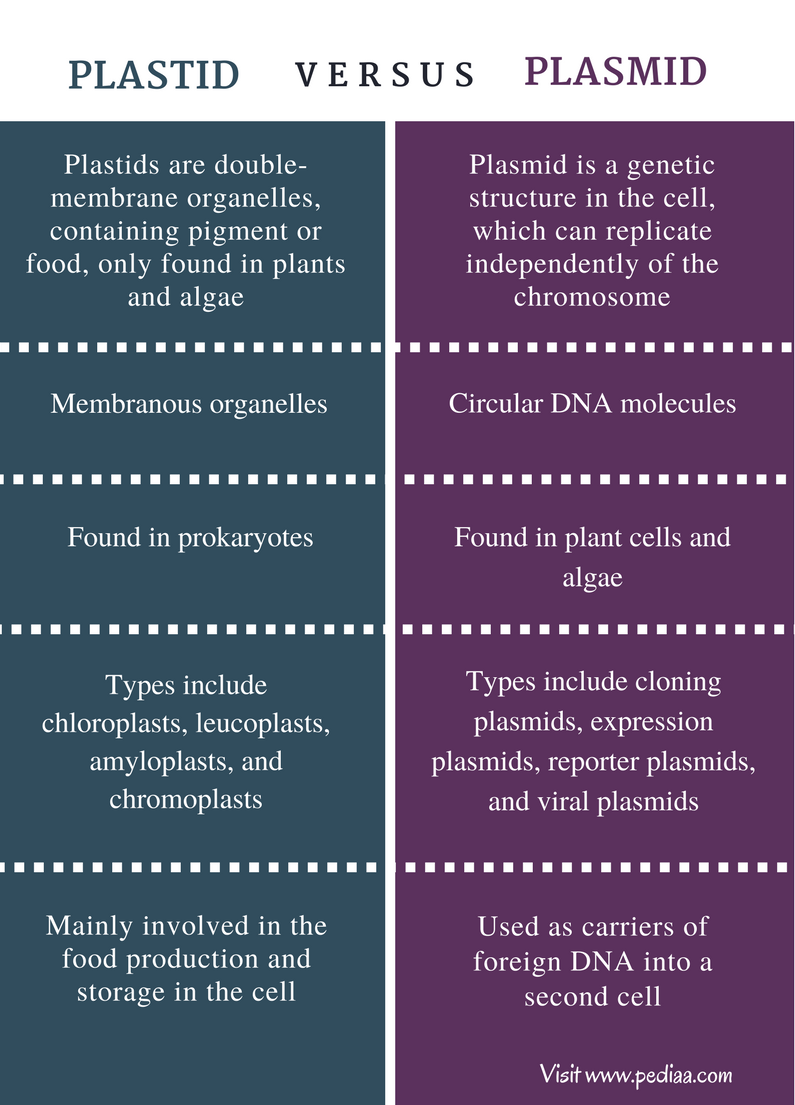 What is a Plastid

Plastids are membranous organelles found in plant cells and algae with different functions in the cell. Three major types of plastids can be identified based on the type of pigment present in each plastid. They are leucoplasts, chromoplasts, and chloroplasts. All of them have a common evolutionary origin. Proplastid is the undifferentiated type of plastids, which develops into each type of plastids. All plastids carry their own DNA. Different types of plastids and their differentiation are shown in figure 1. 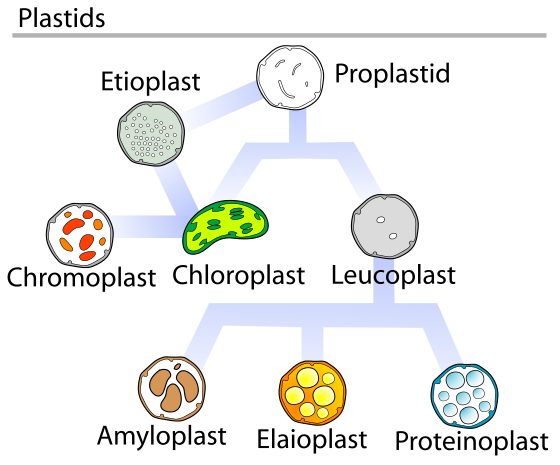 Leucoplasts or white plastids are found in roots of sweet potatoes, internal leaves of cabbage, and stems of potatoes. They do not contain any kind of pigments. Leucoplasts serve as food storage in the form of starch.

Chromoplasts are colored plastids present in the petals of flowers, fruits, and roots of some plants. They contain carotenoid pigments with varying colors from red, orange to green.

Chloroplasts are the green pigments found in stem and leaves of plants. They contain the green pigment, chlorophyll, which is responsible for photosynthesis. Light energy of the sunlight is captured by chlorophyll, and simple sugars are produced from carbon dioxide and water. The chloroplast is composed of an inner and outer membrane, separating chloroplast’s stroma from the cytoplasm. It also comprises thylakoids, which are disk-like structures, forming grana.

Plasmids are extra-chromosomal, self-replicating, double-stranded, circular DNA molecules, usually found in bacterial cells. However, plasmids are not necessary for the survival of bacteria under normal conditions. But, they contain the necessary information for antibiotic resistance, metal resistance, nitrogen fixation, and toxin production. Naturally occurring plasmids can be modified by in vitro techniques such as code transformation.

Plasmids are types of vectors which carry genetic information to a second cell. They can be readily isolated from cells. Unique restriction sites can be found within the plasmid, aiding the insertion of a foreign DNA piece into it. Insertion of a foreign DNA segment into the plasmid does not alter the self-replicative nature of the plasmid. Due to the above properties of plasmids, they can be used as vectors which carry foreign DNA segments into a second cell.

Plasmids contain elements such as the bacterial origin of replication (ORI), at least one unique restriction site, a promoter, a promoter binding site, and a selectable marker gene in its sequence. Most common types of plasmids include cloning plasmids, expression plasmids, gene knock-down plasmids, reporter plasmids, and viral plasmids. The structure of the plasmid, pUC19 is shown in figure 2. 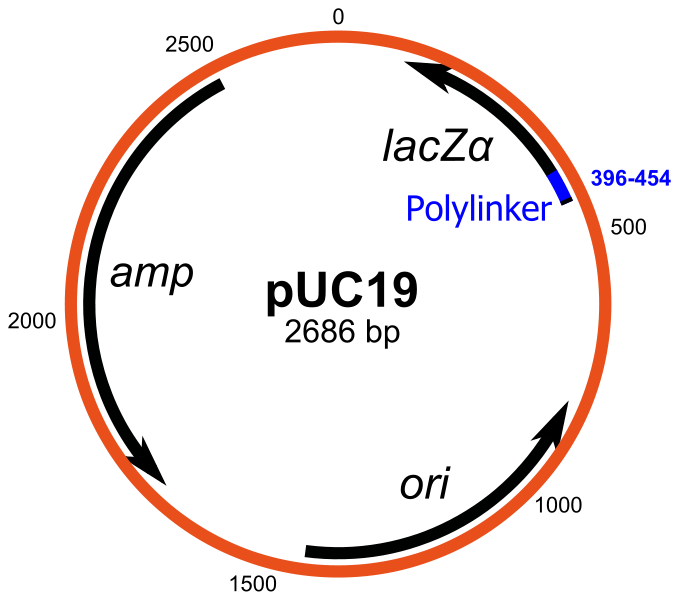 Similarities Between Plastid and Plasmid

Difference Between Plastid and Plasmid

Plastid: Plastids are double-membrane organelles, containing pigment or food, only found in plants and algae.

Plasmid: Plasmid is a genetic structure in the cell, which can replicate independently of the chromosome.

Plastid: Plastids are found in prokaryotes (ex: bacteria and archaea).

Plasmid: Plasmids are found in plant cells and algae.

Plastid: Chloroplasts, leucoplasts, amyloplasts, and chromoplasts are types of plastids.

Plastid: Plastids are mainly involved in the food production and storage in the cell.

Plasmid: Plasmids are used as carriers of foreign DNA into a second cell.

Plastid and plasmid are completely different structures found in cells. Plastids are membrane-bound organelles found in plant cells and algae, involved in the production and storage of chemicals like food inside the cell. Chloroplasts comprise chlorophylls and are involved in the photosynthesis, producing glucose inside plant cells. Plasmids are double-stranded, circular DNA, which provides antibiotic resistance to bacteria. Modified types of plasmids are used in recombinant DNA technology to carry foreign DNA segments into selected cell. The main difference between plastid and plasmid is the function of each structure in the cell.