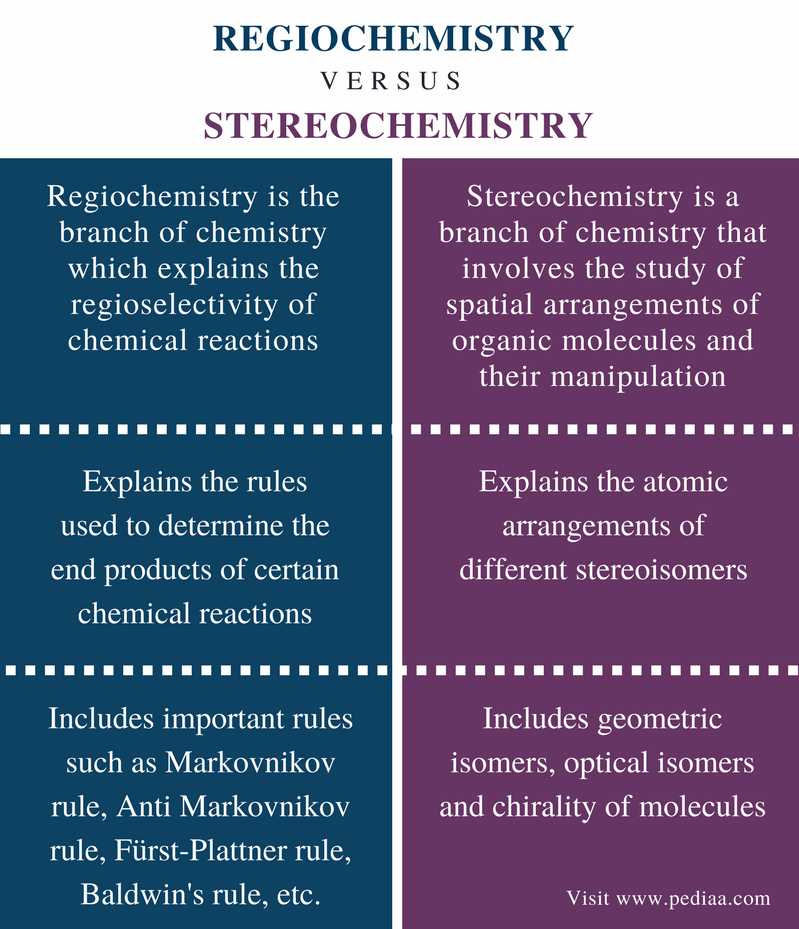 Regiochemistry indicates which product is the major product and which one is the minor product in a chemical reaction that gives multiple products. This depends on the possible positions of the target molecule to which the reagent molecules are going to be added. For example, in a substituted benzene ring, the reagent molecule can get attached to one of the three possible positions, ortho, para and meta positions, depending on the substituent that is already present in the benzene ring.

The above reaction shows the chlorination of toluene. There are several possible positions for the chlorine atom to get attached to the toluene molecule. But the para substitution is the most stable among all. Therefore it is the major product given by this reaction.

Several rules have been introduced in order to determine what would be the major product of a certain chemical reaction. The very first rule is Markovnikov’s rule. According to Markovnikov Rule, the proton is added to the carbon atom that has the highest number of hydrogen atoms attached to it in addition reactions of alkenes or alkynes. This rule helps to predict the end product of a certain chemical reaction.

However, according to Anti Markovnikov Rule, which was later introduced, in addition reactions of alkenes or alkynes, the proton is added to the carbon atom that has the least number of hydrogen atoms attached to it. The end product obtained from this reaction is called Anti Markovnikov product. This mechanism does not involve the formation of a carbocation intermediate. Chemical reactions can be made into reactions that give the Anti Markovnikov product by adding a peroxide such as HOOH to the reaction mixture.

Some other rules regarding Regiochemistry include Fürst-Plattner rule for the addition reactions of nucleophiles, Baldwin’s rule for the Regioselectivity of ring-closure reactions, etc.

In addition, stereochemistry also describes the concept of chirality. Chirality is the property of a molecule that says its mirror image is non-superimposable with the molecule. A chiral carbon is an asymmetric carbon. A carbon atom can have a maximum of four bonds. The chiral carbon is bonded to four different groups and is asymmetric. The carbon atom should always be sp3 hybridized in order to be a chiral carbon. A chiral molecule normally contains at least one chiral carbon. sp or sp2 hybridized carbon atoms cannot be chiral because they cannot have four different groups around them due to the presence of π-bonds. Optical isomers occur in molecules with a chiral carbon. This chiral carbon causes the occurrence of a stereoisomer, which is the non-superimposable mirror image of that molecule.

Difference Between Regiochemistry and Stereochemistry

Stereochemistry: Stereochemistry is a branch of chemistry that involve the study of spatial arrangements of organic molecules and their manipulation.