Repetition is a rhetorical device that involves the repetition of the same word, phrase or sentence. This device, used both in prose and poetry, adds emphasis and power to the literary piece. Repetition is also a good way to ensure that your audience remembers the story; this is why many orators use the technique of repetition.

Repetition can be classified into different types based on the structure of the repetition, and each of these types has unique names. Given below are some examples of these types.

Anaphora:  Repetition of a word or phrase at the beginning of several subsequent clauses or phrases.

(A Tale of Two Cities by Charles Dickens)

Epiphora: Repetition of the same word at the end of every line.

If you did know to whom I gave the ring,

If you did know for whom I gave the ring

And would conceive for what I gave the ring”

(Merchant of Venice by Shakespeare)

Symploce: Combination of anaphora and epiphora. Repetition is both at the end and at the beginning.

(The Love Song of J. Alfred Prufrock by T.S. Eliot )

Polyptoton: Repetition of the words with the same root but different endings.

“How the danger sinks and swells,—
By the sinking or the swelling in the anger of the bells”

(The Bells by Edgar Allen Poe)

Anadiplosis: Repetition of the last word or phrase of one line as the first word of the next.

“The mountains look on Marathon – And Marathon looks on the sea…”

(The Isles of Greece by Lord Byron)

Parallelism can be defined as the juxtaposition of two or more identical or equivalent syntactic constructions, especially those expressing the same sentiment with slight modifications, introduced for rhetorical effect. In simple terms, it is the use of components that are grammatically the same or are similar in construction, meaning or sound. It is created by using other rhetorical devices such as anaphora, antithesis, epistrophe, and asyndeton. Parallelism either joins similar concepts to show their connection or juxtaposes opposing concepts to show their difference. Given below are some examples of parallelism.

When the going gets tough, the tough get going.

Difference Between Repetition and Parallelism

Repetition a rhetorical device that involves the repetition of the same word, phrase or sentence.

Parallelism is a literary device that juxtaposes two or more similar syntactic constructions, especially those expressing the same idea with slight modifications.

Repetition refers to the repetition of words, phrases, or clauses.

Parallelism refers to the repetition of the structure.

Repetition focuses more on the meaning.

Parallelism focuses more on the structure.

Repetition can be categorized into different groups.

Parallelism can be created using different types of repetition. 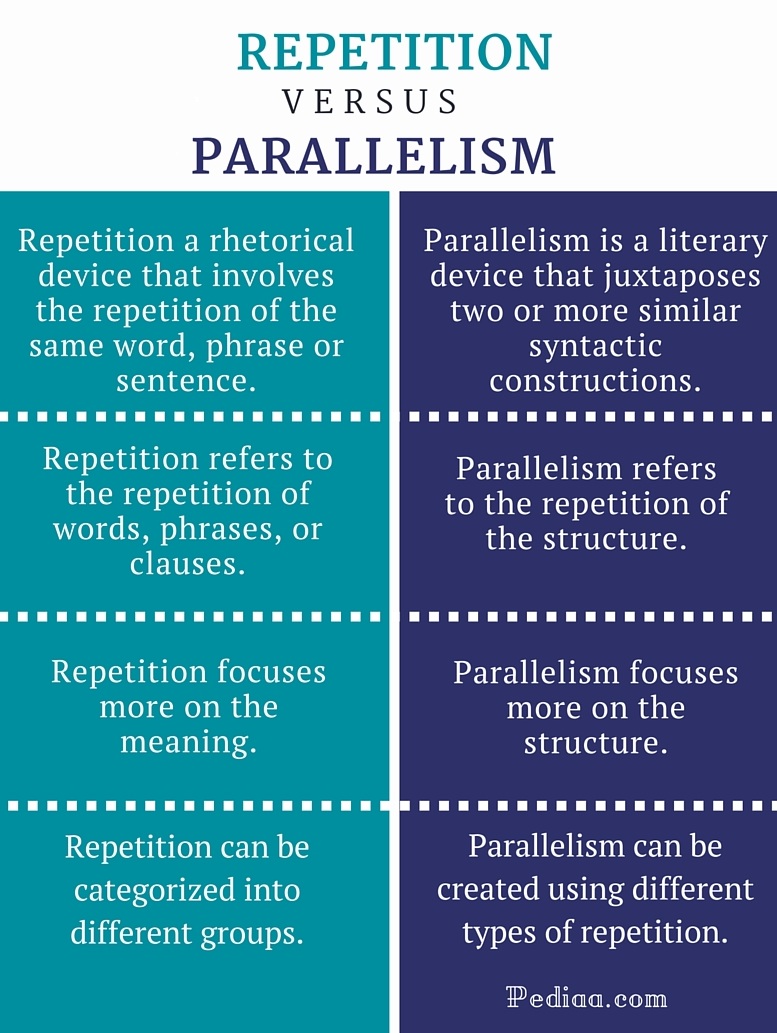