Tone and mood are two of the major literary elements in a text. Both of them are related to the emotions centered around a literary work. Since both these elements deal with emotions, many readers tend to confuse tone and mood; however, they are not the same. The main difference between tone and mood is that tone is the author’s attitude towards a subject whereas the mood is the atmosphere created by the text.

Tone in a literary text is the attitude of the author towards a subject. Tone can be determined by the author’s use of words and detail. An author can use a positive, negative or a neutral tone in writing. All writing, even official and technical documents convey a tone. Official documents, scientific writings are mostly written in an objective, formal tone – this is an example of the use of neutral tone. In literature, authors use a variety of tones: formal, intimate, solemn, playful, serious, somber, ironic, satirical, condescending, bitter are some examples of tones.

“The founders of a new colony, whatever Utopia of human virtue and happiness they might originally project, have invariably recognized it among their earliest practical necessities to allot a portion of the virgin soil as a cemetery, and another portion as the site of a prison”  (The Scarlet Letter by Nathaniel Hawthorne)

“The affirmative results obtained during the survey which was carried out in order to analyze the necessity of additional lecture halls depicted the gravity of this issue faced by the faculty students. Hence, the following recommendations are suggested.”

“One might be led to suspect that there were all sorts of things going on in the Universe which he or she did not thoroughly understand.” (Slaughterhouse-Five by Kurt Vonnegut)

Look at the following excerpt from A Tale of Two Cities by Charles Dickens, and see if you can describe the mood.

“There was a steaming mist in all the hollows, and it had roamed in its forlornness up the hill, like an evil spirit, seeking rest and finding none. A clammy and intensely cold mist, it made its slow way through the air in ripples that visibly followed and overspread one another, as the waves of an unwholesome sea might do.”

The mood in the above excerpt can be described as gloomy and ominous.

Difference Between Tone and Mood

Tone is the attitude of the author towards a subject.

Mood is the atmosphere or the emotional setting created by a piece of literary work.

Tone is mainly created by diction and detail.

Mood is created by setting, imagery, and diction. 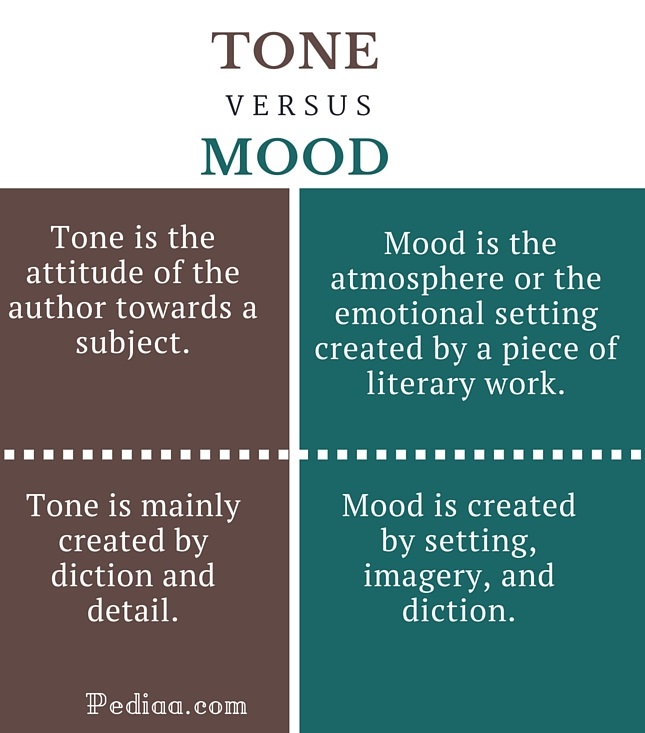