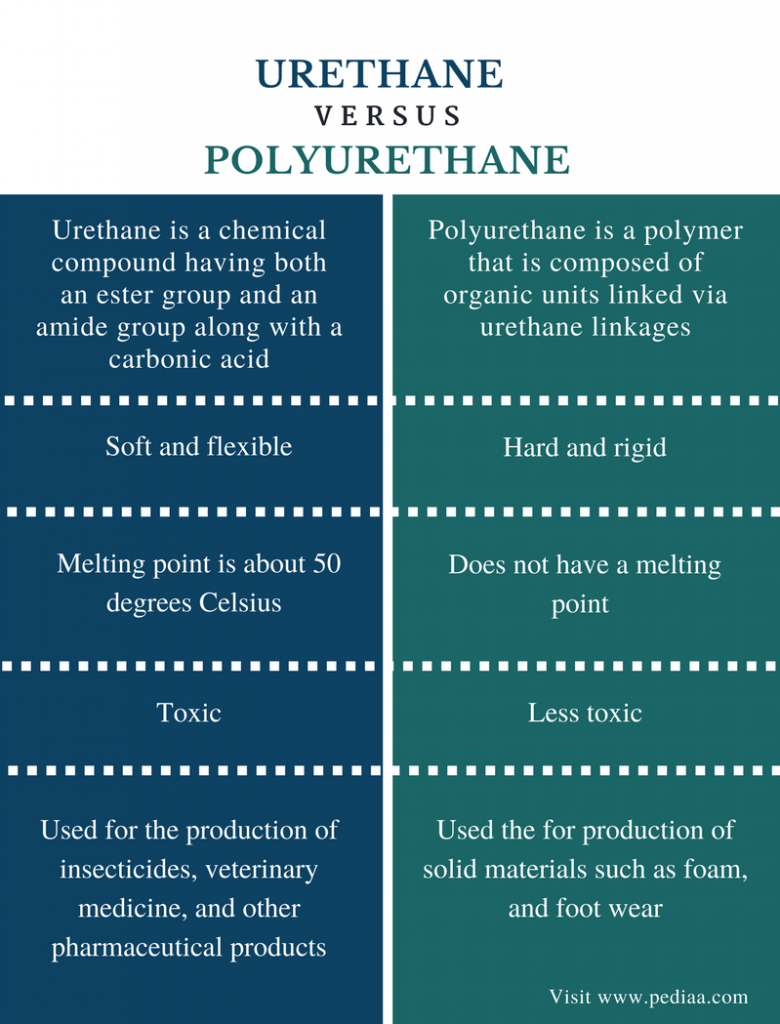 Urethane is a chemical compound having both an ester group and an amide group along with a carbonic acid. Ethyl carbamate is the IUPAC name for urethane. The chemical structure of urethane can be given as R1-O-(CO)-NR2-R3 where R1, R2 and R3 are alkyl groups. R1 is attached to the oxygen atom that has a single bond with the carbon atom. R2 and R3 are attached to the Nitrogen atom. Therefore, -COOR1 indicates the ester group and –CONR1-R3 indicates the amide group.

Urethane is a flexible and malleable chemical compound. Therefore, urethane can be molded into different shapes in order to produce desirable products. The major applications of urethane include the production of insecticides, veterinary medicine, and other pharmaceutical products; sometimes it is used as a solvent, in some cases, urethane is used to produce plastics.

According to researchers, urethane is a toxic compound and it has been found that urethane can cause cancers in small animals. In addition, urethane can be used as spar urethane that is a type of varnish. Spar urethane is made for outdoor applications. This would be the best choice for outdoor furniture since it is highly water resistant. The melting point of urethane may vary from 46oC to 50oC depending on the alkyl group attached to the nitrogen atom.

Polyurethane is a thermosetting polymer. Therefore, when this compound burns instead of melting when heated. Therefore, polyurethane does not have a melting point.

Difference Between Urethane and Polyurethane

Urethane: Urethane is a chemical compound having both an ester group and an amide group along with a carbonic acid.

Polyurethane: Polyurethane is a polymer that is composed of organic units linked via urethane linkages.

Urethane: Urethane is soft and flexible.

Urethane: The melting point of urethane is about 50oC.

Polyurethane:  Polyurethane does not have a melting point since it is a thermosetting polymer.

Urethane: Urethane is used for the production of insecticides, veterinary medicine, and other pharmaceutical products.

Polyurethane: Polyurethanes are used the for production of solid materials such as foam, and foot wear.