Molar mass is a physical property of substances. It is very useful in analyzing, comparing and predicting the other physical and chemical properties such as density, melting point, boiling point, and the amount of substance that react with another substance in a system. There is more than one method to calculate the molar mass. Some of these methods include using the direct equation, adding the atomic masses of different elements in a compound, and using boiling point elevation or freezing point depression. Some of these major methods will be discussed concisely in this article.

What is Molar Mass

How to Find Molar Mass

The molar mass of a substance can be calculated using several methods such as;

These methods are discussed in detail below.

The molar mass of a molecule can be determined using atomic masses. This can be done simply by the addition of molar masses of each atom present. Molar mass of an element is given as below.

Relative atomic mass is the mass of an atom relative to the mass of Carbon-12 atom and it has no units. This relationship can be given as follows.

Let’s consider following examples to understand this technique. Followings are the calculations for compounds with the same atom, combination of several different atoms and combination of a large number of atoms.

The molar mass can be calculated using the equation given below. This equation is used to determine an unknown compound. Consider the following example.

Then the determination can be done by an acid-base titration. Since it is a strong base, titrate the solution with a strong acid (Ex: HCl, 1.0 mol/L) in the presence of phenolphthalein indicator. The color change indicates the end point (Ex: when 15.00mL of HCl is added) of the titration and now all the molecules of the unknown base are titrated with the added acid. Then the molar mass of the unknown compound can be determined as follows.

With the use of Clausius-Clapeyron relation and Raoult’s law, we can get a relationship between ΔT and molality of the solution.

From the above equation, we can get a value for molality of the solution. As the amount of solvent used for the preparation of this solution is known, we can find the value for moles of the compound added. 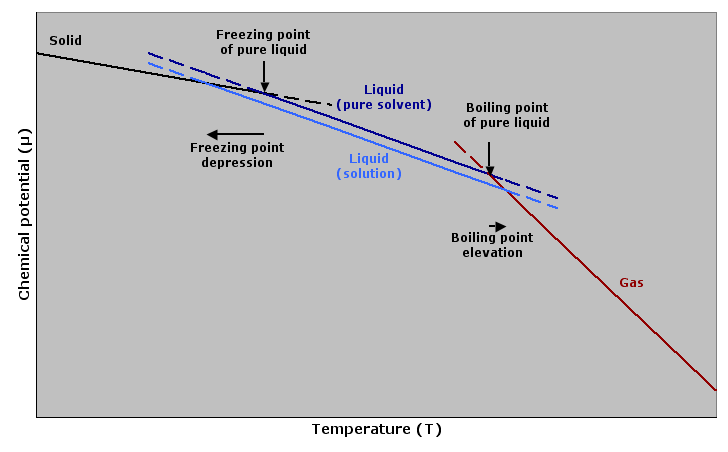 Freezing point depression is the opposite of boiling point elevation. Sometimes, when a compound is added to a solvent, the freezing point of the solution is lowered than that of the pure solvent. Then the above equations are a little bit modified.

The ΔT value is a minus value because the boiling point is now lower than the initial value. The molality of the solution can be obtained the same as in boiling point elevation method.

Here, the Kf  is known as the cryoscopic constant. It is dependent only on the properties of the solvent.

The rest of the calculations are the same as in boiling point elevation method. Here, the moles of the compound added can also be calculated using the below equation.

Osmotic pressure is the pressure needed to be applied to avoid a pure solvent from passing to a given solution by osmosis. The osmotic pressure can be given in below equation.

Where, ∏ is the osmotic pressure,
M is the molarity of the solution
R is the universal gas constant
T is the temperature

The molarity of the solution is given by the following equation.

There are several methods to calculate the molar mass of a given compound. The easiest way among them is the addition of molar masses of elements present in that compound.