The main difference between amide and peptide bond is in the molecules involved in the bond formation. An amide bond is a chemical bond that occurs between a hydroxyl group of a carboxylic group (-COOH) of one molecule and a hydrogen of an amino group (-NH2) of another molecule. Whereas, the peptide bond is a type of amide bond which occurs between two amino acids during the synthesis of a polypeptide chain. Furthermore, amide bonds are involved in the formation of small molecules while peptide bonds are responsible for the formation of polymers called proteins.

Amide and peptide bond are two types of chemical bonds that occur between carboxylic and amino groups of molecules. 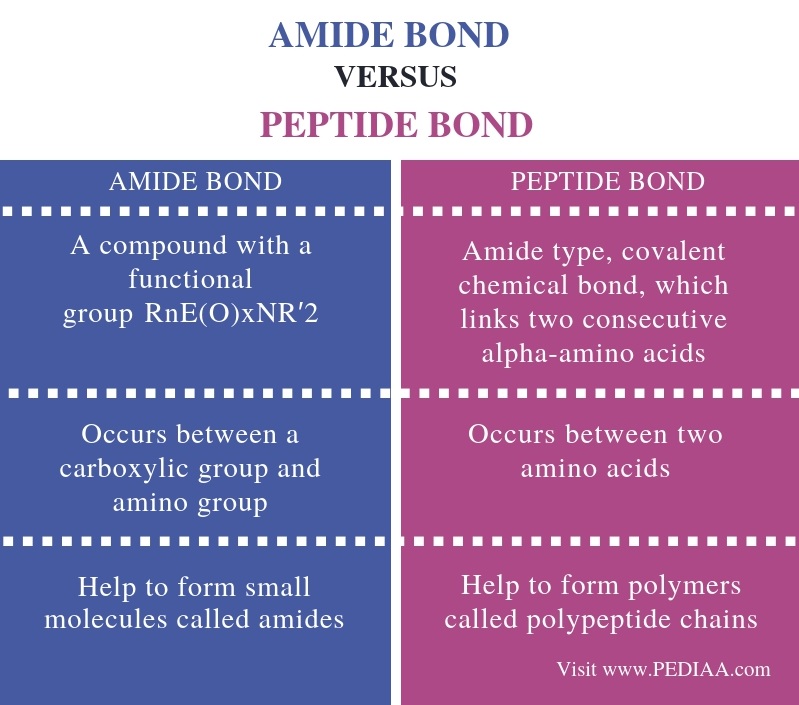 What is an Amide Bond

An amide bond is a type of covalent bond involved in the formation of an amide. An amide is characterized by the presence of a functional group known as RnE(O)xNR′2 (R and R′ refer to H or organic groups). There are three types of amides in nature. They are carboxamides (n = 1, E = C, x = 1), phosphoramides (n = 2, E = P, x = 1 and many related formulas) and sulfonamides (E = S, x = 2). Moreover, the simplest amides are the derivatives of ammonia (RC(O)NH2).

While considering the basicity, amides are very weak bases in comparison to amines. Therefore, they do not show any acid-base properties in water. Furthermore, amides have a number of technological applications as a structural material. Nylons are such polyamides used in fabric, as fibers, and molds.

What is a Peptide Bond 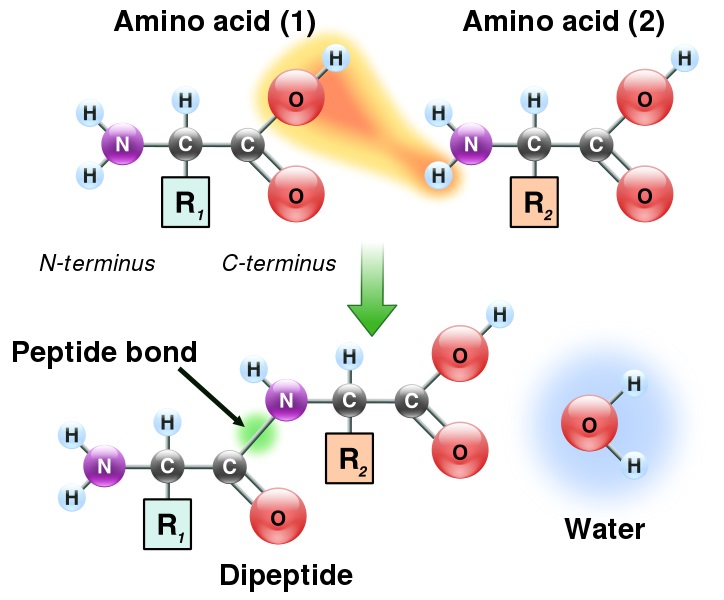 Furthermore, the formation of a peptide bond occurs during protein synthesis with the assistance of ribosomes. These bonds are kinetically very stable; hence, polypeptides will remain for a long period of time in a solution unless any catalyst is present in the solution to degrade it.

Similarities Between Amide and Peptide Bond

Difference Between Amide and Peptide Bond

An amide bond is a covalent bond which occurs between a carboxylic group of one molecule and an amino group of another molecule. On the other hand, a peptide bond occurs between the carboxylic and amino groups of two amino acids. Amide bonds generally form small molecules while peptide bonds form a polymer called polypeptide chain. Therefore, the main difference between amide and peptide bond is the type of molecules they form.